As expected, Minardi confirmed on July 19th that Robert Doornbos will race for the team from Hockenheim onwards, replacing Patrick Friesacher. 23 year-old Doornbos, who has been Jordan's third driver since late in 2004, is expected to compete with ...

As expected, Minardi confirmed on July 19th that Robert Doornbos will race for the team from Hockenheim onwards, replacing Patrick Friesacher. 23 year-old Doornbos, who has been Jordan's third driver since late in 2004, is expected to compete with Minardi until the end of this season. Friesacher had to step down due to sponsorship problems. 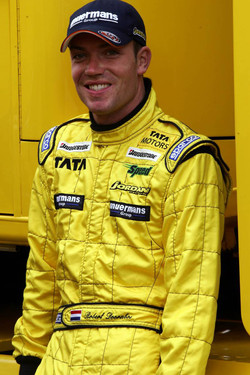 "I can't hardly wait to get started on Friday," said Doornbos, in regard to the German Grand Prix where he will make his F1 race debut. "This is the chance I've hoped for and where both me and my management have worked very hard for. I feel fit and ready to make this next step in my career."

"By racing I can gain more experience, which will make me of larger value when I grid up in 2006. This year Jordan/Midland could not yet hand me the opportunity to race for them. Minardi now does. I'm very eager to translate my ambitions into action!"

Doornbos, who was the International F3000 rookie of the year in 2004, joins compatriot Christijan Albers at Minardi, giving the team an all-Dutch race driver line up. "We are pleased to welcome Robert to Minardi," said team principal Paul Stoddart.

"He has demonstrated clearly over the last year that he has the pace necessary to compete in Formula One, and we are pleased to give him the opportunity to make his World Championship debut at this weekend's German Grand Prix."

"I believe he is going to do an excellent job over the coming races, and I'm sure the Minardi team can expect even more enthusiastic support from the Netherlands, if that's possible, as we now have the first, all-Dutch driver line-up."

Doornbos already has an offer from Jordan to race for the team next year, when it becomes Midland. Who will replace Doornbos as Jordan's third driver for the remainder of this season is not yet known, although yet another Dutch driver, Nicky Pastorelli, is rumoured to be a candidate. Nicolas Kiesa, who formerly raced for Minardi, is also a possibility.

The car that almost propelled Minardi into extinction