Mercedes engine boss Andy Cowell says that his team's 2015 power unit represents a significant change from the all conquering 2014 machine and i...

Mercedes engine boss Andy Cowell says that his team's 2015 power unit represents a significant change from the all conquering 2014 machine and is looking forward to further significant developments through the season.

Cowell emphasised that his team would be running a full 2015 power unit from the start of the season with the 'token' system offering teams a great opportunity to keep developing through the season.

With the caveat that maintaining reliability is particularly important with just four power units available for the entire season - one less than 2014 - Cowell believes that his team have flexibility to alter their development strategy to changing circumstances.

"After twelve days of testing we will decide exactly what changes we will introduce in Melbourne at the start without risking reliability," Cowell said to Auto Motor und Sport. "It is our goal to use the best possible engine as soon as possible. If all goes according to plan, there is also the variable intake system that the new rules allow this year."

Cowell admits that he may well retain some of the development options for later in the year given the leeway offered by the FIA's token system which gives teams a specified quota of changes that can be made, albeit with just four complete power units across the balance of the 19 races.

"We'll decide depending on how reliable our engine evolution is. The new rule that we can develop to the end of the season as part of the 32 tokens gives us the space to take more time for critical developments. 32 tokens corresponds to 48 percent of the engine.

Ferrari's pace in the first pre-season test in Jerez is cited by many as an indication of the extent of the development opportunity for the engine manufacturers that the token system has offered them and Cowell believes that the engineers have had considerable room to express themselves.

"If you look at the list of allowed changes only in the area of the combustion chamber, then two tokens are already an awful lot."

"I can assure you that we'll go with the 2015 engine in the season. Right from the first test in Jerez there were all new developments in the engine. We have incorporated many new ideas around combustion, internal friction and energy conversion in the fields.

"90 percent of the modifications can not be seen from outside. They were made to the heart of our engine."

Asked about mooted plans for noisier and more powerful engines for 2017, Cowell says that it can be achieved quite easily with the latest generation of power units but only at the expense of using more fuel, a decision that should not be taken lightly.

"I believe that the current architecture can produce roughly 1,000 hp and more sound if we increase the flow rate. However, we should not dilute the concept of energy efficiency. It would be a shame to lose sight of this goal. The technology transfer from motorsport is important for Formula 1. That is why Honda has arrived."

There are some important changes to the number of power units allowed, with a cut from 5 per driver for the season, to just four, which must last all 20 Grands Prix.

There is more to it than a simple internal combustion engine (ICE). In fact that ICE is just one of six components of the power unit, along with the motor generator unit-kinetic (MGU-K), which harvests energy when the car is braking, the motor generator unit-heat (MGU-H), which harvests heat energy from the turbo, the battery or “energy store”, the turbocharger and the control electronics. Each driver may only use four of each of those parts during a season. They can mix them up, but not use a fifth component.

Should a driver exceed their allocation of four power units or use more than one of the six parts, a grid or time penalty will be imposed.

For a full breakdown and table of how the penalties will be applied in 2015 read this post:

Why Formula One has failed to conquer emerging markets 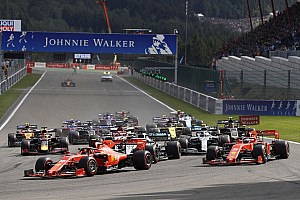