Despite Ricciardo points, a frustrating grand prix for Red Bull in Australia 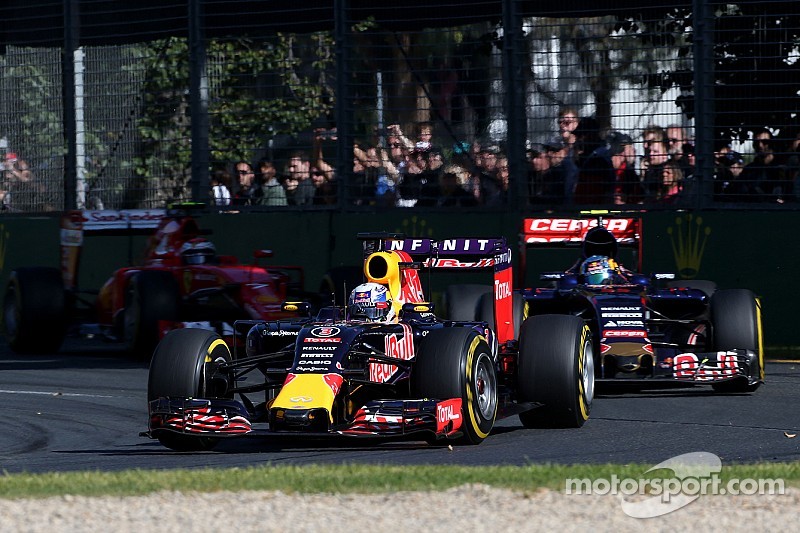 Daniel Ricciardo: "In terms of where we need to improve, the main issue is the drivability and the power,"

Daniel Ricciardo (Finish Position: 6th, Start Position: 7th): “It wasn’t the most exciting race. After the start I was able to stay with Nasr, but I wasn’t able to get close enough to make the move. We finished the race and got some points which was positive, and there are things we can learn; I think on paper sixth was the best for us today. It was a shame for Dany, I feel for him I hope we have a smoother weekend in Malaysia.

In terms of where we need to improve, the main issue is the drivability and the power, there are pretty big chunks that we know we need to find there. Beyond that it’s hard, as with the chassis itself I don’t think we’ve really been able to test it to its limits yet due to the other issues we’ve had. We’ve got a lot of work to do, but we have got a lot of information from this weekend which will help us ahead of Malaysia.”

Daniil Kvyat (Finish Position: DNF, Start Position: DNS, qualified 13th): “I had to stop on the way to the grid as we had a problem; I think it was something to do with the gearbox. Obviously it’s not a nice feeling to watch the other drivers on track while you are here. From now on, it can only get better so we are staying positive. I have confidence in the team. We have another race in two weeks and will be pushing as hard as we can ahead of that.”

Christian Horner, Team Principal: “A frustrating grand prix for us. It was disappointing to lose Daniil before the race started with a gearbox problem. Daniel did everything he could with the tools that he had. It unfortunately demonstrates that there’s a quite a lot of ground to make up, so sixth place was the best we could manage on a rather difficult day.”

Thierry Salvi, Renault: “A very hard first race for the team. From the opening session of the weekend we’ve faced a number of issues, and for sure are not where we wanted to be in reliability and performance. This has cost lap time and points. The mapping and software need to be looked at in detail to give better driveability in the coming races. We’ve got to be realistic about what we can achieve but we can definitely move forward from what’s been a frustrating weekend overall. We are as disappointed as anyone but also resolved to fix these issues in Malaysia.”

Lewis Hamilton wins race of attrition with a one-stop strategy