British driver skidded over the gravel at full speed and thumped into the barriers head-first.

Feb.7 (GMM) Lewis Hamilton proved his dedication to Mercedes on Wednesday by revealing he gave his legs a deliberate "thump" when his rear brakes failed at Jerez. 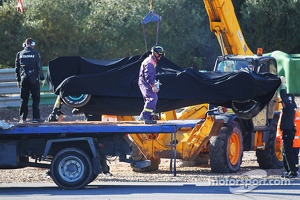 On his first official day of running after switching from McLaren for 2013, the British driver skidded over the gravel at full speed and thumped into the barriers head-first.

"If I had turned the car around, the whole side of the car would have been broken," the Briton is quoted by Auto Motor und Sport.

Actually, according to Bild newspaper, only the EUR 100,000 front wing was smashed.

Dedicated yes, but the 2008 world champion confessed to being "disappointed", particularly after the W04's debut on Tuesday was marred by Nico Rosberg's fire.

"The team have to go and look at the design and make sure it doesn't happen again," said Hamilton, "but I have total confidence they will do that."

The breakages are one thing, but Hamilton said the W04 also needs more pace.

"I need more aero for sure," he said. "Coming from a McLaren that had incredible downforce, you definitely notice the difference."

After the crash, he spent some time trackside, being impressed by his 2013 rivals. "The Red Bull and the Lotus look good," he said.

So good was the Lotus on Wednesday that Romain Grosjean went faster even than Jenson Button's impressive Tuesday time.

"It's just a little better everywhere," the Frenchman, referring to the new black E21, said.

Also trackside, technical expert and broadcaster Gary Anderson was impressed with the Lotus.

"You can see that the steering wheel and the front tyres are working together very well," he is quoted by Speed Week.

"We're going to get a better idea at the next test in Barcelona, but a good car is good everywhere," he added.

"It was much more different than I expected," the former Sauber driver said, "but we are going in the right direction.

"I could tell straight away that this car has good potential. I could feel it. It's a very complete car. I'm happy with the car I've got."

Ferrari's Felipe Massa was eighth, just behind Perez, and reports indicate the new F138 was recording higher than expected temperatures.

He said the new Ferrari was "visibly" not handling as well as the Lotus, McLaren and Red Bull.

"It is undeniable that Ferrari has dropped behind these three teams," added Oricchio.

Maldonado and Williams satisfied with day 2 at Jerez