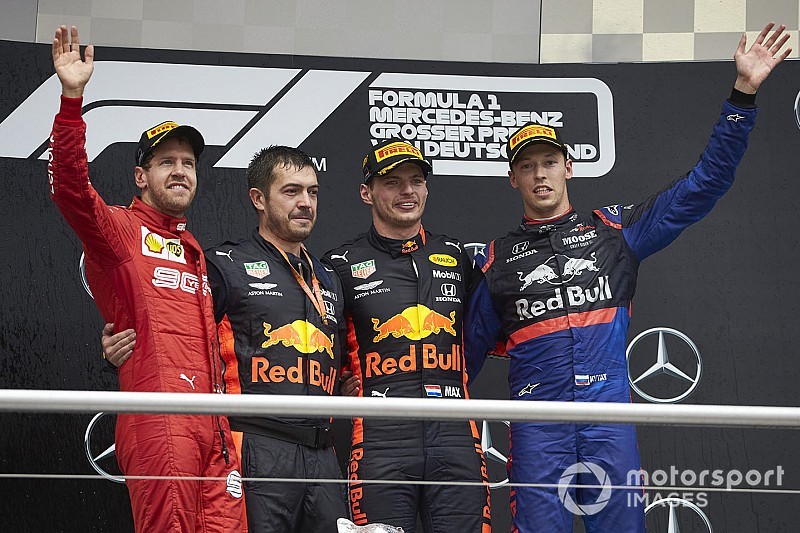 In one of the craziest races in modern Formula 1 history, every driver came away with a tale of triumph or 'what could've been', but which driver do you think shone in Germany?

In the ultimate claim to keep the Hockenheimring on the Formula 1 calendar, the 2019 German Grand Prix was certainly a thriller, with several plot twists which resulted in one of the least-expected podiums for some time.

Despite there eventually being winners and losers from the race, many of the drivers probably had a period of the event where they thought things weren't going to go their way.

Eventual race winner Max Verstappen had been held off by the Mercedes drivers in the early stages of the race, but he was the only one from the top three who managed to see the chequered flag, despite having his own nervy mid-race spin.

Ferrari's Sebastian Vettel had a great opening segment of the Grand Prix, but had to bide his time and wait until the closing stages to really mount a challenge for the podium places and complete an unlikely comeback drive from 20th on the grid.

Daniil Kvyat's sensational return to the rostrum seemed completely implausible until the final fifteen laps of the race. Up until that point, the Russian had been running in the points, but team-mate Alex Albon had been the lead Toro Rosso for much of the race.

Lance Stroll had an even more anonymous race than that until he and Racing Point took an almighty gamble and became the first to pit for slick tyres for the final time, leaping up into podium contention.

Fifth-placed Carlos Sainz almost ended up retiring altogether after a near-miss with the barrier earlier on in the race, whilst their were highs and lows for both Alfa Romeo and Haas drivers.

In all the chaos, who do you think was the standout driver of the 2019 German Grand Prix? Have a listen to the latest episode of the Autosport Podcast, where Stuart Codling and Edd Straw dissect all the events of the last race, and leave your thoughts in the comments section below:

Leclerc: I put everything in the bin with crash