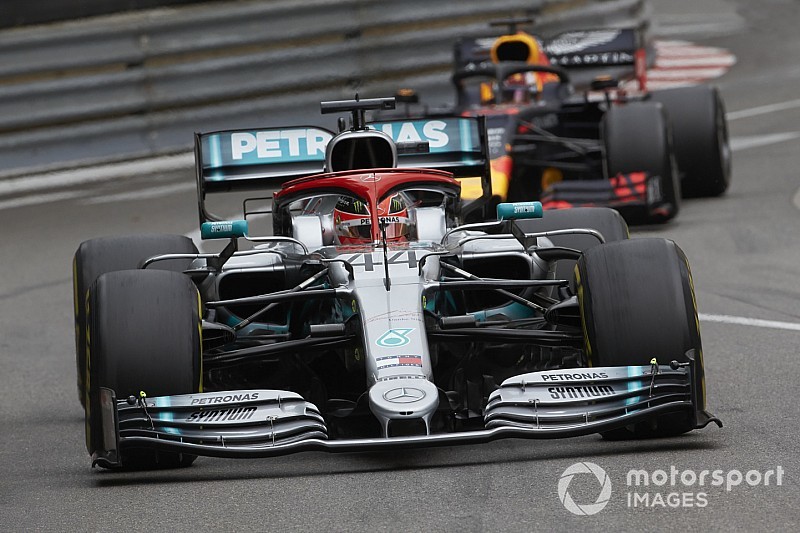 With overtaking difficulties once again proving the main factor in the contest for the Monaco Grand Prix win, did the battle for the victory echo the tension of Monaco 1992?

Lewis Hamilton believes that his Monaco Grand Prix win was one of his greatest, most hard-fought victories of his career. For a race with no on-track overtakes between the top four drivers, it had a lot of suspense.

After the only safety car phase of the race, Hamilton led Max Verstappen, Sebastian Vettel and Valtteri Bottas but, he was the only driver on the medium-compound tyre, with his rivals all on the hard tyres.

If the race was to have no further chaos - such as heavier rain fall or incidents to his main competitors - then this tyre call was a mistake from the Mercedes team.

With even the midfielders not dropping that far behind, Hamilton only had one option; to try and carry the medium tyres until the end of the race. He succeeded in executing a 67-lap stint with Verstappen - looking to take his first Monaco win - right behind.

Listen to the Autosport Podcast: Scott Mitchell and Edd Straw review the Monaco Grand Prix, with Matt Beer also appearing to look back at the Indianapolis 500.

The 2019 edition of the Monaco Grand Prix had a similar theme to last year's event, when Red Bull's Daniel Ricciardo fended off Ferrari's Sebastian Vettel despite an ailing power unit.

However, where Vettel was unable to mount a serious challenge on Ricciardo in 2018, this year's race served to be a more tense, nail-biting affair, with Verstappen rarely falling out of the DRS window behind Hamilton and making a genuine attempt for the race lead.

The Dutchman looked menacing behind the Mercedes, particularly as the cars rounded the Casino hairpin in close company. The temptation for Verstappen to send his car up the inside of one of the slowest corners on the track must have been unbearable.

Whilst Hamilton might have been a sitting duck at any other venue, the streets of Monaco gave him the opportunities to resist the Red Bull in the few attacking zones available.

What did you think of the 2019 Monaco Grand Prix? Were you entertained by the tension or frustrated by the lack of overtaking opportunities? Leave your comments in the section below.

The latest on Ferrari's quest to solve its problems