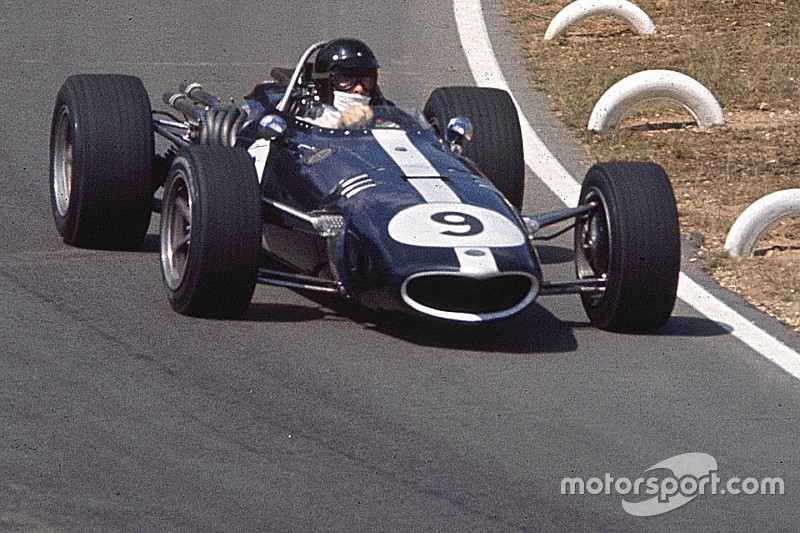 The 50th anniversary of Dan Gurney’s most epic year will be marked by a year-long exhibition of his cars at the Petersen Automotive Museum in Los Angeles.

Some five decades on, it’s hard to imagine just how easy it was for a versatile driver time to fill his calendar with commitments back in the 1960s. Easy to schedule, that is; extremely hard to fulfill – and crazily difficult to perform strongly across all disciplines.

Unless, of course, you were on that plateau of drivers who can make anything go quick. Mario Andretti and Stirling Moss, of course were two. Jimmy Clark, Parnelli Jones, A.J. Foyt, John Surtees also possessed hugely malleable talents. And of course, so too did Dan the Man – Daniel Sexton Gurney – without doubt one of the greatest motorsport figures this or any other country has produced. A good man, a great racer, an innovative engineer, and a dedicated plow-my-own-furrow company leader.

As a driver Gurney won in Formula 1, Indy cars, sports cars, Can-Am cars, NASCAR stock cars and Trans-Am truly stock cars! As a constructor, too, he won in F1, Indy cars and sports cars, with his usually elegant All American Racers’ Eagles.

Gurney is one of only three drivers (the others are Sir Jack Brabham and Bruce McLaren) to have won a Formula 1 race in a car of his own construction – the gorgeous Eagle-Weslake, commonly referred to as the T1G. This victory, at Spa Francorchamps in June 1967, was just one (hugely significant) episode in a year during which he proved his talent in seemingly all branches of the sport. Little wonder that a year later, after Clark’s funeral, Jimmy’s heartbroken father murmured to Gurney that he had been the only driver his son had feared.

In February of ’67, Gurney qualified fastest for the Daytona 24 Hours in Ford GT40 MkII; in March he drove the Eagle-Weslake to victory in the Race of Champions at Brands Hatch, UK, a non-championship F1 race; in April he edged Parnelli Jones for Trans-Am victory in his Mercury Cougar; in May he qualified second for the Indy 500; in June he put the brand-new titanium Eagle-Weslake on the front row at Zandvoort, won Le Mans 24 Hours with Foyt in a GT40 MkIV, and scored that famous Spa victory at a record average speed; in August he dominated the middle portion of the German GP at the Nurburgring until mechanical failure; in September he finished third in F1’s Canadian GP; in October he dominated the Can-Am race at Riverside until his car broke; and in November he won the Indy car race at Riverside.

Now, 50 years on from this epic 1967 season, Petersen Automotive Museum will pay tribute to Gurney’s racing career with an exhibit that runs from January 28 through January 17th 2018.

Gurney never won the Indy 500 as a driver – although he did have a great three-year run of 2nd-2nd-3rd from 1968 through ’70. That ’68 runner-up finish completed a magnificent 1-2 for his Eagle marque, as Bobby Unser won in an Eagle-Offenhauser and Gurney came home in second in an Eagle-Ford. Both these cars will be on display at the Petersen.

Eagles would win Indy twice more – with Gordon Johncock's Patrick Racing-entered machine in ’73 and with Unser again in 1975.

Also on display will be a Plymouth AAR ’Cuda, one of the two gorgeous cars that Gurney prepared for himself and Swede Savage to campaign in the 1970 Trans-Am championship. Reliability wasn’t a strong point despite strong pace, but the 2744 street-legal versions sold were instant classics, and now fetch around $100k on the classics market.

Over 10 AAR racecars will be on display but the Petersen exhibition will also feature treasured mementos such as the bottle of Moet champagne Dan shook and sprayed from the podium at Le Mans in ’67, thereby starting a tradition among successful racers.

More details soon regarding the cars on display at “The Eagles Have Landed: Dan Gurney’s All American Racers” exhibit.