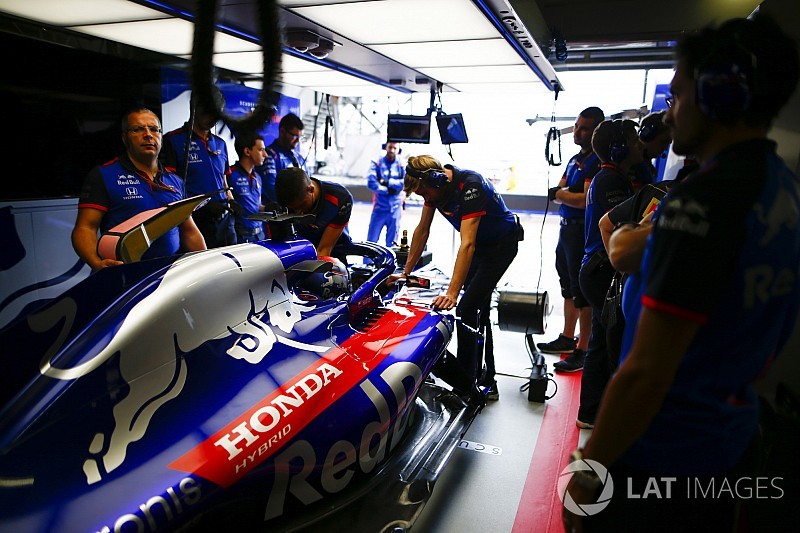 Honda is remaining coy on its mooted Formula 1 engine upgrade for the Canadian Grand Prix but will be "careful" not to hurt reliability in the pursuit of performance.

The Japanese engine manufacturer is expected to bring updates to next week's race in Montreal, which is both a power-sensitive track and a logical time in the calendar to introduce fresh parts.

Honda changed the MGU-H and turbocharger on both Toro Rosso drivers' engines after the season-opening Australian Grand Prix and replaced Pierre Gasly's internal combustion engine at the same time.

That means the Frenchman's components have completed five GP weekends, but Brendon Hartley's have much less mileage after he took an entire fresh batch for the Spanish GP two races ago after a huge crash in final practice.

Pressed on whether Honda had validated reliability and would now search for performance, Tanabe said: "So far it [reliability] looks stable but I think we need to be careful not push too hard on the performance. We need balance.

"We have a lot of things to do and not many short-term solutions, most are long-term. [If] we develop something and then apply it to the engine, we need to have a reliability test.

"Any tiny thing to improve the performance, we need time."

Honda has tried to avoid public statements about performance this season as it seeks to rebuild after being harshly criticised at times during a damaging three-year spell with McLaren.

The Toro Rosso drivers have confirmed they expect an engine upgrade in Canada and though they stopped short of setting specific expectations Gasly admitted he was "really excited".

"I'll wait until FP1 to see exactly what the difference is on the computer," said Gasly.

"I've learned that in Formula 1 it's better to wait and see once you put the new parts on because sometimes it doesn't work as well as you expect, sometimes it works better.

"But it can only go in the right direction, I think, so I'm really excited about this upgrade."

Gasly finished seventh in Monaco, the third time in six races that Toro Rosso and Honda have scored points together.

Their pace looks particularly strong on circuits where the emphasis on the engine is at low-speed, and Honda is satisfied with the 2018 unit's driveability and how it is operating its energy recovery systems.

"The key point [in Monaco] is low-RPM, and on-off throttle application," said Tanabe. "That's one of the key parameters to set energy management.

"We have worked on the driveability very much to help the chassis behaviour through the corner and [the driver] accelerate earlier.

"Reliability, power and driveability are key points for the engine. Of course power is important for lap time but the driveability has a big effect as well.

"Our engineers always communicate with the team and driver to improve their confidence for throttle application."