Coulthard to step out of the cockpit end of 2008

Scottish "call me British" driver David Coulthard will stop competing in Formula One at the end of this season. The Red Bull driver, who posted his most recent podium finish at this year's Canadian Grand Prix, announced ahead of Sunday's British ...

Scottish "call me British" driver David Coulthard will stop competing in Formula One at the end of this season. The Red Bull driver, who posted his most recent podium finish at this year's Canadian Grand Prix, announced ahead of Sunday's British Grand Prix that he will continue his contribution to the energy drink-owned F1 team. 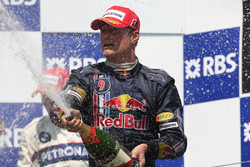 "I will remain actively involved in the sport as a consultant to Red Bull Racing, focusing on testing and development of the cars," Coulthard said. "I have an open mind as to whether or not I will compete again in the future, in some other form of motorsport, so I am definitely not hanging up my helmet."

Coulthard, 37, of Twynholm, Dumfries and Galloway, said he made his decision earlier this year. He said he wanted to finish racing while competitive and "enjoying the challenge." He said he seeks new challenges within the sport.

"The decision to make this announcement at the British GP should be an obvious one for all to understand, as I have achieved two of my 13 F1 victories at Silverstone, and I am a member of the British Racing Drivers' Club, which hosts this event," Coulthard said.

Coulthard has enjoyed racing at non-F1 events when the chances have arisen, including the famous 24 Hours of Le Mans in 1993 when he, John Nielsen and David Brabham drove the TWR Jaguar Racing Jaguar XJ220 C home to a 15th overall position, placing first in Class C4. Coulthard has also received invitations for the Race of Champions and has run in the Goodwood Festival of Speed several times over his racing career.

Besides winning 13 races, Coulthard has led 60 races, placed on 62 podiums, earned 12 pole positions, set 18 fastest laps, started 236 grands prix, and scored 533 points, the most by a British driver. Coulthard won the 1999 and 2000 British Grands Prix while driving for McLaren Mercedes. His best world championship run came with the British team in 2001 when he finished second to Michael Schumacher of Ferrari. He finished third in the drivers' race in 1995, 1997 and 2000. In addition to Silverstone, Coulthard won in Monaco (twice), Australia (twice), Brazil, Austria, Belgium, Italy, France, San Marino and Portugal, where he won his first F1 race. 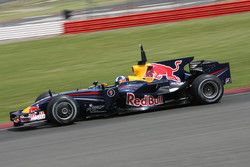 Coulthard was a test driver for Williams when he was moved into a race seat after the death at the San Marino Grand Prix of Ayrton Senna in 1994. His first race victory for the team was at the Portuguese Grand Prix in 1995. He moved to McLaren in 1996, where he was overshadowed by the team's double world champion-to-be Mika Hakkinen, who won titles at McLaren in 1998 and 1999. In the 1997 Spanish GP, Coulthard was told to give his race lead and potential victory to Hakkinen. Coulthard suffered with the FIA's introduction in 2003 of single-lap qualifying. Rumors of Coulthard's retirement in 2004 were met with his move to Red Bull.

In 2000, Coulthard, then-girlfriend Heidi Wichlinksi and personal trainer and bodyguard Andy Matthews survived the crash in the south of France of a borrowed Learjet that killed the pilot and co-pilot.

Coulthard said he owed his racing success to many people. He singled out his parents, Dave Boyce, his karting coach; David Leslie Sr. and David Leslie Jr., who, he said, taught him to race and set up a race car; Sir Jackie Stewart and his son Paul Stewart, for whom he raced through lower formulae; Sir Frank Williams, who promoted him from test driver after the death in 1994 of Ayrton Senna; Ron Dennis and Norbert Haug, for whom he raced at McLaren Mercedes; Christian Horner and Helmut Marko, for whom he races at Red Bull; Bernie Ecclestone, whose series-managing skills provided lucrative opportunity for racers; Martin Brundle and David Cawthorne as well as Annette Hutchinson and Iain Cunningham, who serve as his management team, and Adrian Newey, who designed the cars Coulthard drove at all three teams that employed him.

Coulthard also thanked "all the media, officials, marshals, medical support, mechanics, engineers, sponsors, lawyers, accountants and back-room staff that I have worked with during this period."

"He's one of the coolest characters in pit lane," McLaren driver Lewis Hamilton said of Coulthard. "He's inspirational for all of us." 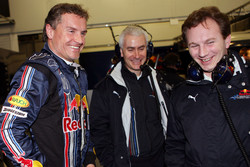 Coulthard has been with Red Bull since Dieter Mateschitz bought and re-branded the Jaguar team after the 2004 season. Team boss Christian Horner lauded his veteran driver.

"Working with David has been an absolute pleasure, and his contribution to the team over the past four seasons has been significant," Horner said. "He is a consummate professional, and I think that one of the key elements to the length of his career is the dedication he has applied and the commitment he has shown to the team. He has demonstrated that he is a real team player, a fact reinforced by the statistic that he has only driven for two other F1 teams in his career. To date, he has won 13 grands prix and there could have been many more if you count the near misses and the ones he gifted to other drivers. He scored our first point, our first podium and was the first of our drivers to lead a grand prix. Above all, he is a gentleman, and I regard him as a good friend. Within the team there's a huge amount of respect for David. His retirement brings to a close not just his career as a grand prix racing driver but also a chapter in the history of Formula 1, if one considers the changes the sport has been through while he has been involved with it.

"Now he heads off to face a new challenge. Red Bull Racing will still be utilizing his services and he will on occasion drive the car in test sessions for us so that we can draw upon his vast experience and knowledge. He will be involved as a consultant to the team and to the technical group as we look to extract the maximum from his considerable experience of Formula 1. I don't think he will be struggling to fill his time."

Articulate and humorous, Coulthard has been suggested as a natural to become a race commentator when the British Broadcasting Corporation (BBC) regains rights from Independent Television (ITV) to air F1 next season. Coulthard's manager, Brundle, also a former F1 racer, currently comments for ITV's F1 coverage.

Coulthard, who once said he considered himself British more than Scottish, is the longest-serving Scot in F1. Innes Ireland won the first F1 race for Team Lotus in 1961. He was replaced thereafter by future double world champion and Indianapolis 500 winner Jim Clark. Jackie Stewart won three world driving championships between 1969 and 1973. 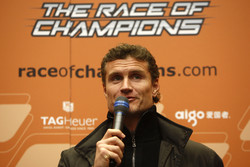 Participating in an F1 charity auction, Coulthard made a winning bid for a tour of the McLaren Mercedes factory and turned up there Wednesday with Brundle, another former McLaren driver, Horner and Newey.

"David has always been a popular driver at McLaren and we've known him for a long time," McLaren Group COO Martin Whitmarsh said. "In fact, he's driven more grands prix for McLaren than any other driver in Formula 1 history. It's fantastic that he has put his hand in his own pocket to support this charity auction and it's great to see him back at Woking. This afternoon showed that we still remain friends with many of our former drivers -- because Martin, of course, is an ex-McLaren driver, too."

Currently engaged to Karen Minier, a Belgian F1 correspondent for French television, Coulthard is a longtime Monaco resident who has homes in three other countries and holds interests in luxury hotels.

Webber to remain with Red Bull for 2009