Coulthard to stay with Red Bull for 2006

Red Bull Racing confirmed on July 5th that David Coulthard has extended his contract and will race for the team in 2006. Recent speculation had it that the Scot was lining up a move to BAR and that Red Bull was aiming to have Christian Klien and ...

Red Bull Racing confirmed on July 5th that David Coulthard has extended his contract and will race for the team in 2006. Recent speculation had it that the Scot was lining up a move to BAR and that Red Bull was aiming to have Christian Klien and Tonio Luzzi in its race seats next year, but the announcement confirmed Coulthard as Red Bull's 'lead driver' for next season. 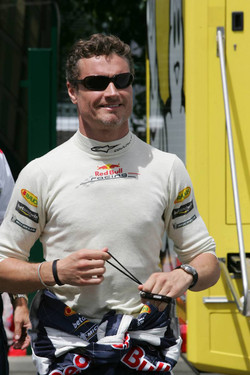 "It's been a very positive new experience working with Red Bull Racing," said Coulthard. "The potential of the team is obvious and it made perfect sense to continue our partnership."

"Since I started with the team last December, the progress made has been remarkable. I'm looking forward to contributing to the development of the RB2 with the Ferrari engine and enjoying continued success with Red Bull Racing."

Coulthard previously raced with McLaren for nine years before moving to Red Bull for 2005. His best results so far this season have been two fourth places, in Melbourne and Europe, and he is currently 10th in the drivers' standings with 17 points.

"David has clearly demonstrated that he's still one of the top drivers in F1," said Red Bull sporting director Christian Horner. "He's played a vital part in Red Bull Racing's on track credibility so far this season. It was therefore a very easy and natural decision to extend our agreement for 2006 and retain him as our lead driver."

The news will come as a blow to Klien and Liuzzi unless, of course, they have plans of their own. Coulthard's renewed contract is the first confirmation in the driver market for 2006 of teams that were not already decided -- if indeed any of them ever were.

Red Bull, which currently runs with Cosworth engines, will be Ferrari-powered next year. The Italian manufacturer parts company with long-time partner Sauber at the end of this season and the Swiss squad will be taken over by BMW in 2006.

The Coulthard announcement will no doubt add fuel to the fire of driver rumours. Rubens Barrichello was another name linked to BAR but the Brazilian denied he was leaving Ferrari. Jenson Button is thought to be heading back to Williams, hence the supposed BAR vacancy, but for the moment it's all speculation.