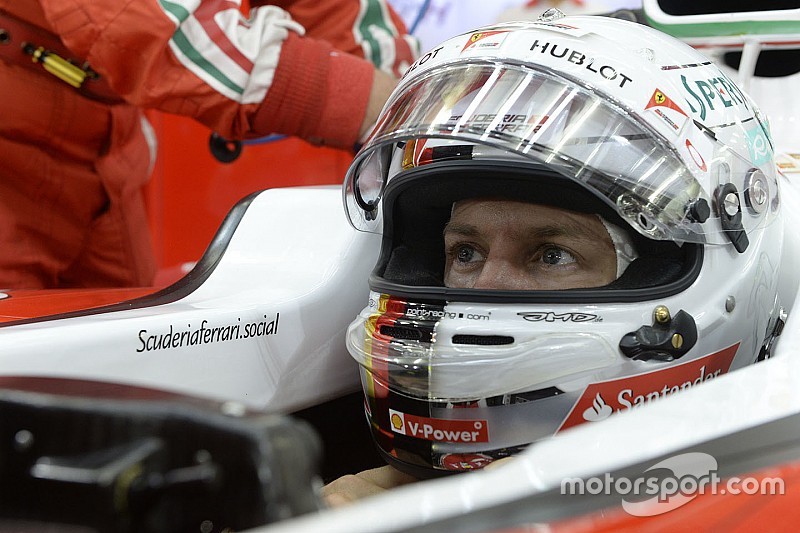 With heavy rain falling before the start of the hour-long session, there was very little running in the opening stages.

In fact, it wasn't until the quarter hour mark that anyone bothered to venture on track. Williams drivers Valtteri Bottas and Felipe Massa eventually broke the silence.

Even then, it took until the mid-way point for anybody to set a laptime. It was Ferrari's Kimi Raikkonen who went first, a 1m20.812s standing as P1 for around 10 minutes.

With a third of the session left, conditions began to improve and times started to fall. Carlos Sainz Jr improved the benchmark to a 1m59.865s on wets, before Vettel jumped to the top with a 1m57.351s on intermediates – which proved to be fast enough to hang on for P1 until the end.

Vettel's switch to inters prompted several of his rivals to follow suit - and Bottas found more than two seconds from his initial time on full wets to finish P2 with a 1m58.061s, Sergio Perez and Carlos Sainz also slipping under the 1m59s barrier to finish P3 and P4 respectively.

As track conditions improved slightly in the closing stages, Esteban Gutierrez and Jolyon Palmer moved up to fifth and sixth fastest.

Palmer had earlier had to contend with a rear-right puncture mid-way through the session, with Renault teammate Kevin Magnussen seventh fastest.

Manor's Pascal Wehrlein impressed as he ran as high as fifth in the latter stages of the session, but ultimately dropped back to eighth before he ran wide briefly across the run-off area at Turn 8.

Max Verstappen was ninth fastest, with Nico Hulkenberg rounding out the Top 10.

Both Mercedes and Red Bull opted to limit running for FP3. The Red Bull drivers did appear with around 20 minutes to go, both Daniel Ricciardo and Daniil Kvyat setting purple sectors on their out-laps on intermediate tyres. However, neither actually set a time.

Lewis Hamilton and Nico Rosberg also ventured on track, but didn't set times, in a likely bid to save tyres for the expected wet qualifying session.