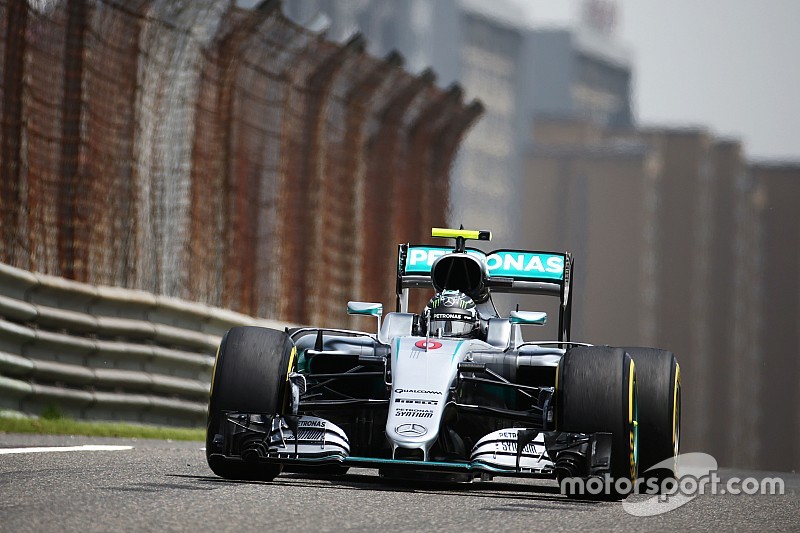 Nico Rosberg was fastest in first practice for the Chinese Grand Prix, while a spate of tyre problems saw almost the entire final third of the session red-flagged.

Rosberg had been second fastest, just over two-tenths slower than teammate Lewis Hamilton, before a 25-minute red flag period at the tail-end of the session.

But when the green flag kickstarted a seven-minute Happy Hour right at the end, which saw both Mercedes drivers head out on the soft-compound tyre, it was the German who made the best of it, improving to a 1m38.037s to grab P1.

Hamilton, meanwhile, also improved on his final run – but not by enough. His 1m38.183s left him just short of Rosberg, but still nearly half a second clear of third-placed Sebastian Vettel, who also improved with a final run on softs.

It may have been a clear Mercedes 1-2, but it wasn’t a straightforward session for either Rosberg or Hamilton. The Briton had his struggles early on, spinning twice at Turn 11 as he battled significant oversteer.

Then, at the very end of the session, Rosberg was forced to crawl back to pitlane in ‘limp home mode’ thanks to a suspected engine problem that struck just seconds after he set his quickest time.

Those problems were nothing compared to the tyre issues that marred the session.

They started with Felipe Massa, the Williams driver finding himself in a high-speed Turn 6 spin before he’d even had a chance to set a time.

The Brazilian’s car shed its rear-left tyre on the run to T6 around 20 minutes into the session, sending Massa backwards through the gravel before the corner before spitting him out the other side.

He managed to return to the pitlane under his own speed, but the trail of debris led to a short red flag period.

With a little more than half an hour to go, Massa returned to the track – only for another rear-left to destroy itself almost immediately having seemingly fouled on the rear part of the floor.

Massa wasn’t the only driver to have tyre dramas. Renault’s Kevin Magnussen was forced to limp back to pitlane right on the half-hour mark as well with a damaged left-rear, the Dane reporting a suspension issue.

Like with Massa’s first failure, there was sufficient debris on the circuit to bring out the red flag, the stoppage running until there was just seven minutes left as investigations into the cause of the failures took place.

Daniel Ricciardo was fourth fastest, just over a second behind Rosberg, after improving late on soft rubber like the three ahead of him. Raikkonen did likewise to go P5, ahead of Daniil Kvyat, Carlos Sainz Jr, Jenson Button, Nico Huldenberg, and Max Verstappen.

Esteban Gutierrez, meanwhile, failed to set a time at all. The Mexican was hampered by electrical gremlins, Haas making the call not to send him back out after the 45-minute mark.