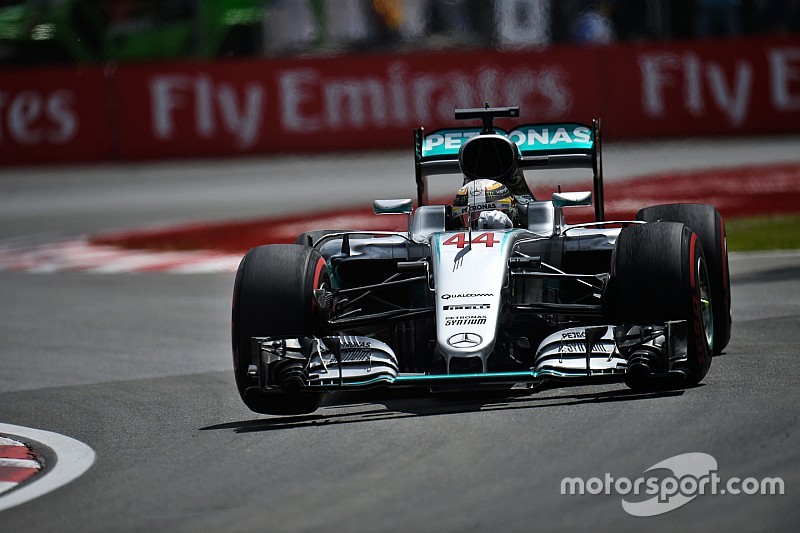 Hamilton lapped the Circuit Gilles Villeneuve in 1m14.212s in his Mercedes, 0.257s quicker than Vettel’s Ferrari.

The second Mercedes of Nico Rosberg was third fastest, half a second off Hamilton’s pace, ahead of the Red Bulls of Max Verstappen and Daniel Ricciardo.

The Force Indias of Sergio Perez and Nico Hulkenberg ran a rare 1-2 before Vettel split them, his 1m16.164s just 0.099s off Perez’s best.

Hulkenberg improved to 1m15.944s on lap seven of his supersoft run, before Verstappen, Vettel and Ricciardo all rattled off P1 times in quick succession. Ricciardo lowered the best time to 1m15.530s on supersofts.

Valtteri Bottas jumped up to second in his Williams on 1m15.213s. After his big shunt in the first session, his teammate Felipe Massa was back out right from the start after great work from his Williams crew. He temporarily placed fourth after his first run.

Vettel’s second flyer on ultrasofts managed to split the Mercs, his 1m14.469s a quarter of a second off Hamilton. The Ferrari was also the fastest car in the speed traps with its new-spec turbo.

Behind Bottas in sixth, Button – who joined the session late due to an engine change following this morning’s oil leak – was seventh fastest after a spectacular wall-grazing lap that actually matched Bottas’s time.