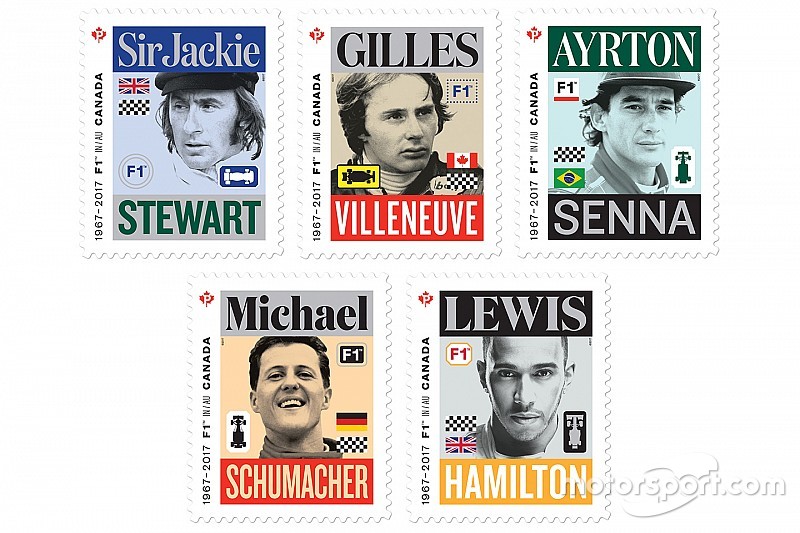 These five Formula 1 drivers are national heroes in their home countries as well as international legends. As a group, they have won 220 Grands Prix – 17 of them in Canada – taken 216 pole positions, 399 podiums, and 16 World Championships.

Between 1994 and 2004, German Michael Schumacher won an unrivalled seven Canadian Grand Prix. Briton Lewis Hamilton, who is still competing in F1, has won five. He hopes to make it six at the 38th Grand Prix at Circuit Gilles Villeneuve on June 11.

Jackie Stewart and Ayrton Senna both won two Canadian races – Stewart at Mosport in Ontario in 1971 and 1972 and Senna in Montréal in 1988 and 1990. Finally, Canadian Gilles Villeneuve recorded his first Grand Prix win at the island track that now bears his name and remains the only Canadian to have won an F1 race in Canada.

The stamps feature head-and-shoulder images of the drivers. The cover of a booklet of 10 depicts an F1 car rocketing past a grandstand, with the Montréal infamous Biosphère looming in the background. This unique set and related products are available at canadapost.ca/shop.

Bottas: It was my job to hold Vettel up