At the wet Sao Paulo venue on Sunday, stock car driver Gustavo Sondermann lost control near the end of the lap at the Curva do Cafe corner that in recent times has been unofficially dubbed 'Tamburello de Interlagos'. 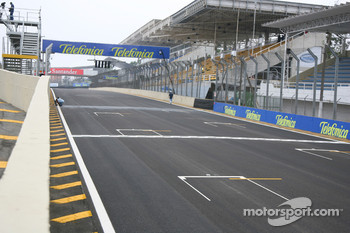 The grandstands at the Interlagos circuit

'Tamburello' is a reference to Imola's notorious sweeping corner that was radically reprofiled after Ayrton Senna was killed there in 1994.

At the fast-left Curva do Cafe in 2007, Rafael Sperafico was killed after he bounced off the wall and into the path of a competitor, and in February a motorcycle rider also died at the corner.

Now, Sondermann has succumbed to his injuries after an almost identical crash to Sperafico's.

"The circuit is very good, the best in the country and internationally approved, but we have a serious problem there," Bueno said in an interview with TV Globo.

"We need to make a change and the ideal one would be an escape area," he added.

"We need to find the room for that, like bringing down the bleachers for some run-off. Safety must come first.

"The solution exists and we need unity to make the changes before the next thing happens there," he told SporTV.