Button: F1 needs Hamilton to have a more challenging teammate 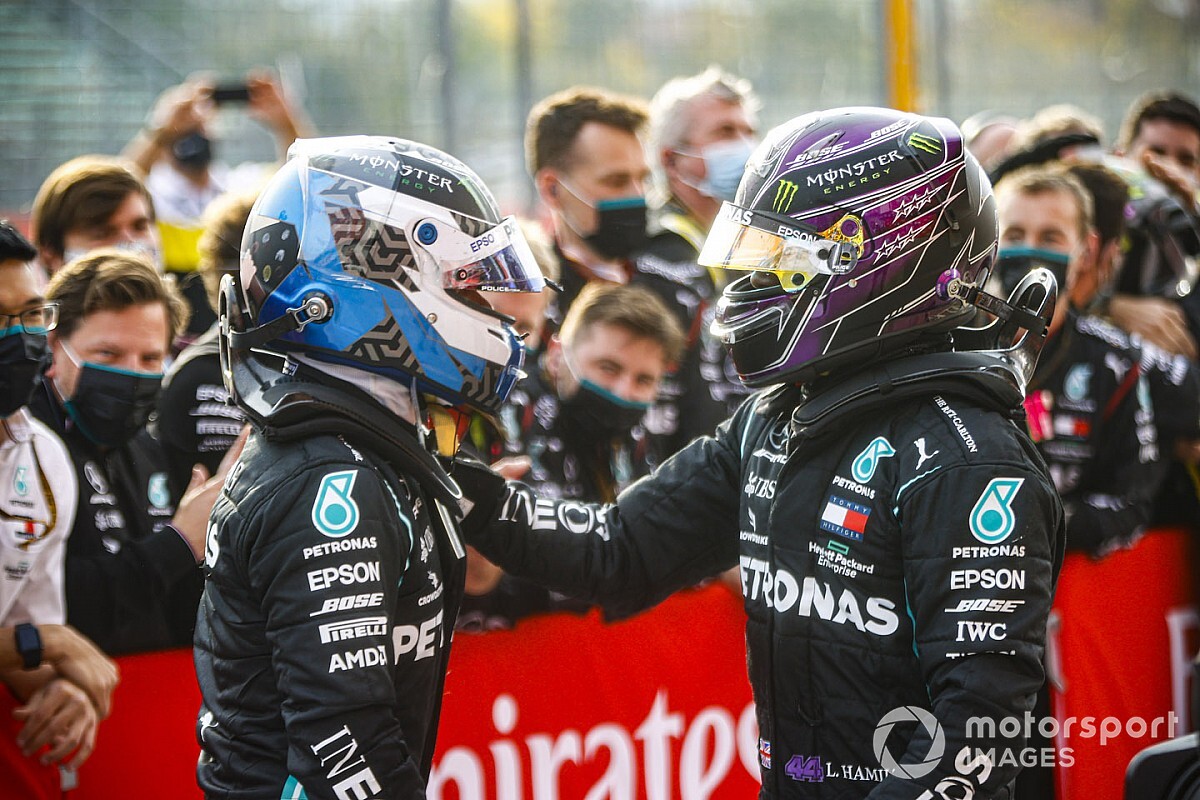 Jenson Button believes Formula 1 needs Lewis Hamilton to be paired with a more challenging teammate at Mercedes before he will stop winning world championships.

Hamilton can clinch a record-equalling seventh F1 drivers’ title in Turkey this weekend, having dominated the 2020 season with nine wins in 13 races.

Teammate Valtteri Bottas is the only driver who can still beat Hamilton to the title, but saw his hopes of a maiden championship fade through the season, scoring just two wins.

2009 F1 world champion Button is one of only two drivers to have beaten Hamilton as a teammate across the course of a season. The duo spent three seasons together at McLaren from 2010 to 2012, with Button beating Hamilton in the standings in 2011.

Button felt it was hard to say where Hamilton stood among F1’s greats due to the difficulty in comparing eras, but doubted his tally of wins or championships would stop growing unless he faces a sterner challenge at Mercedes.

“Comparing records is a tricky one,” Button told Motorsport.com. “We all like a number and we all like to beat a number, but it’s really difficult to compare.

“All you can say is he’s done the best job he can and the team have done a fantastic job, they’ve not been beaten in the hybrid era and Lewis has won all but one championship with them.

“I don’t see that changing either. It’s going to continue until he stops, or until he gets a teammate that can actually challenge him.

“He’s definitely learned from his teammates, and he’s definitely a more rounded driver than when we were teammates. But if he had a teammate like Max [Verstappen], we would see a different driver from Lewis.

“He needs to have that challenge, otherwise he’ll just keep doing the same thing and he’s going to keep winning the championship.

“He needs somebody that’s going to challenge him and Mercedes. You can’t blame them because it’s easier if they’ve got one guy who is quicker than the other.

“I know Valtteri gets close in qualifying and sometimes outqualifies him, but race pace compared to Lewis this year, he’s nowhere near him.”

Bottas joined Mercedes in 2017 following Nico Rosberg’s sudden retirement, and is contracted with the team until the end of next year.

George Russell and Esteban Ocon are both members of Mercedes’ young driver programme, and have been linked with Bottas’s seat in the future.

But Button felt only Verstappen, Ferrari’s Charles Leclerc and Renault’s Daniel Ricciardo were currently capable of taking the challenge to Hamilton as team-mates at Mercedes.

“I don’t think George is ready to be up against Lewis yet, there aren’t many drivers that are,” Button said.

“Max, Charles and Daniel Ricciardo - that’s it I reckon, those are the guys that are ready to challenge Lewis.

“I’d love to see Danny Ric up against Lewis, because I think he would mentally hurt Lewis a lot.

“He would be quick and he would laugh everything off, he would be so relaxed, so down to earth, he’s a proper character and I know that most drivers would find that difficult."

Kvyat vows to "keep pushing" despite worries on F1 future