Dodds is keen to point out that there is a potential conflict of interest as the FIA has to approve the sale while itself holding a 1 percent stake in the business, estimated to be worth £33m, meaning that it will profit from the deal going ahead.

A statement from her office today said: "The 1999-2001 European Commission investigation into Formula 1 was supposed to result in the FIA being limited to the role of regulator with no commercial interests in order to avoid any conflict of interest.

"Yet the current state of affairs – with the FIA standing to benefit financially from a sale which it is legally required to approve as regulator – seems to show that a clear conflict of interest remains."

Dodds has previously taken an interest in F1 due to the presence of several teams in her South East of England constituency, with specific regard to the way the sport's income is distributed.

In her latest letter, Dodds says: "The FIA has a duty to ensure the new owners of Formula One adhere to a 'fit and proper persons test' before they approve a sale of the sport.

"Given that they can only cash their £33m shares if they approve a sale, it appears a clear conflict of interest has arisen from their actions since the 2001 agreement with the Commission." 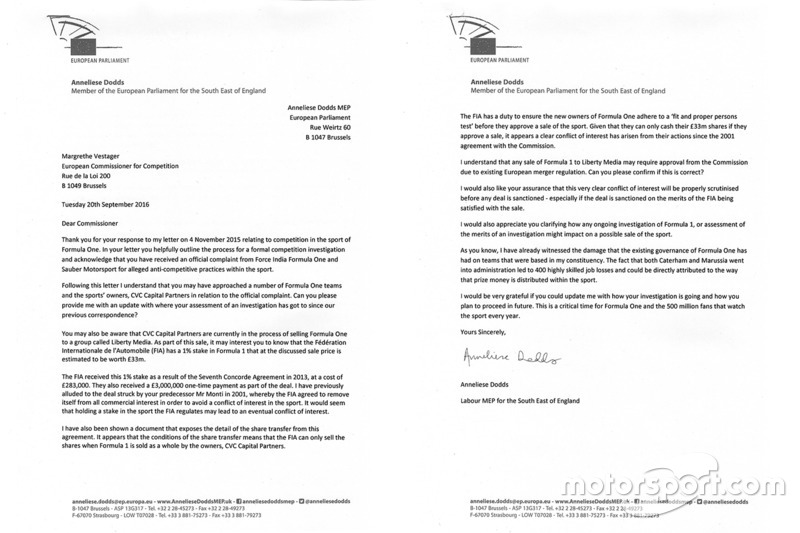 Anneliese Dodds letter to the European Commissioner for Competition

She also asks Vestager to clarify that the sale requires approval from the Commission due to European merger regulations, and adds: "I would like your assurance that this very clear conflict of interest will be properly scrutinised before any deal is sanctioned – especially if the deal is sanctioned on the merits of the FIA being satisfied with the sale."

Commenting on the letter, Dodds was keen to point out that the Force India/Sauber case is also still ongoing.

"I have also asked the Commission for an update into their assessment of whether to launch a full investigation into anti-competitive practices within the sport," she said.

"The current financial structure ensures the big teams will always receive the largest share of prize money, regardless of where they finish on the grid.

"We have already lost two good teams in my constituency [Caterham and Marussia] and it is likely that more will follow if the situation doesn't change soon."

Dodds wrote the letter on September 20th, but its contents have only just been released as she had to await formal acknowledgement of its receipt.

She is now awaiting a reply from the Commissioner before any further steps are taken.

Analysis: How Vettel is seeking an advantage with 2017 Pirelli testing