Join us as we delve into the latest technical developments on display on Friday ahead of the British Grand Prix at Silverstone, courtesy of Motorsport Images.

Click the arrows on the images to scroll through them… 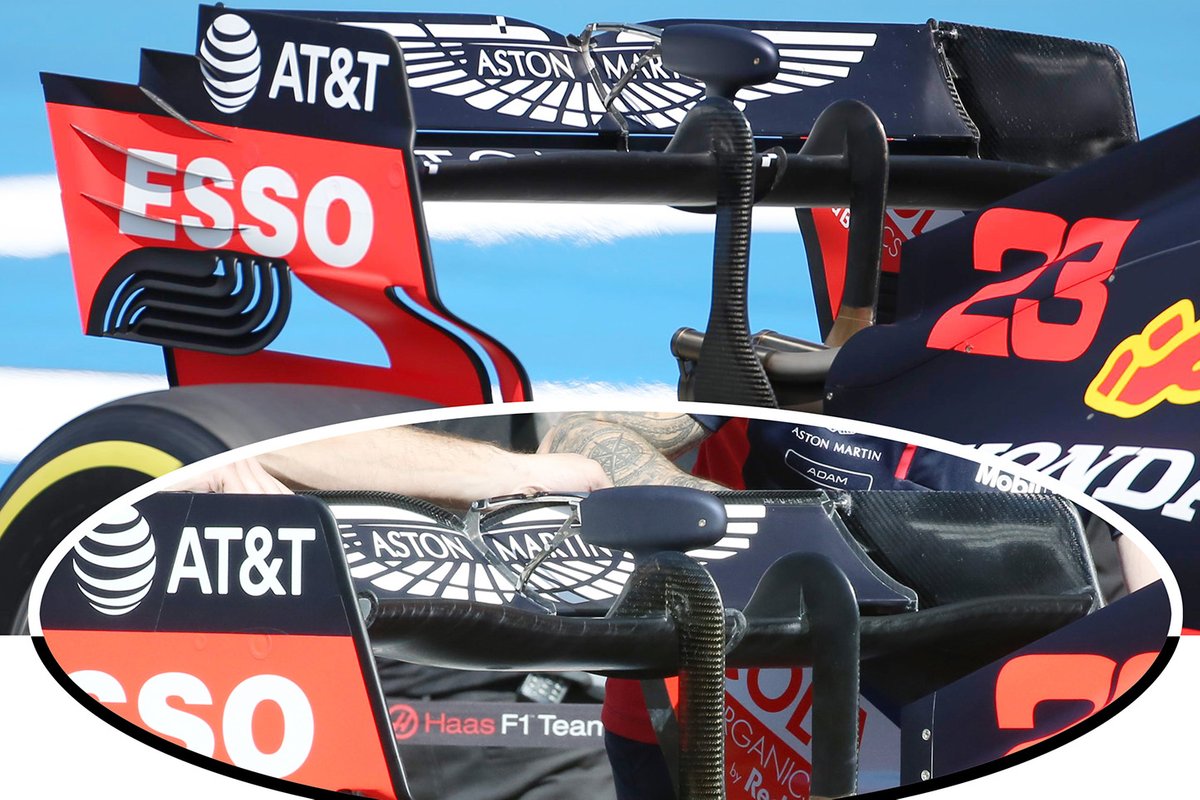 Red Bull has a new lower downforce rear wing (inset) available for the British GP which features a spoon shaping to provide more downforce from the central section. It crucially alters the ferocity of the tip vortex created at the flap and endplate juncture.
Red Bull Racing RB16 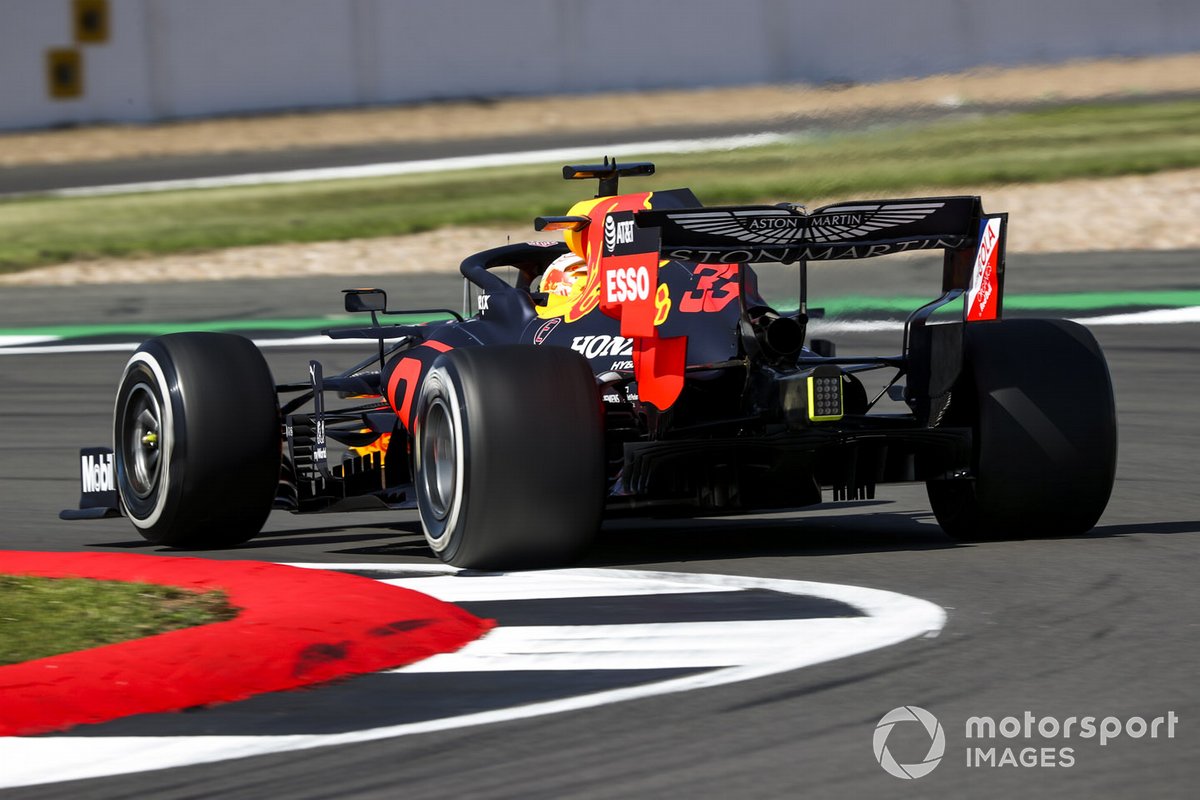 A rearward shot of the RB16 showing the spoon-shaped rear wing. Note that the additional aerodynamic furniture added to the endplate in the last few rounds has been removed.
Ferrari SF1000 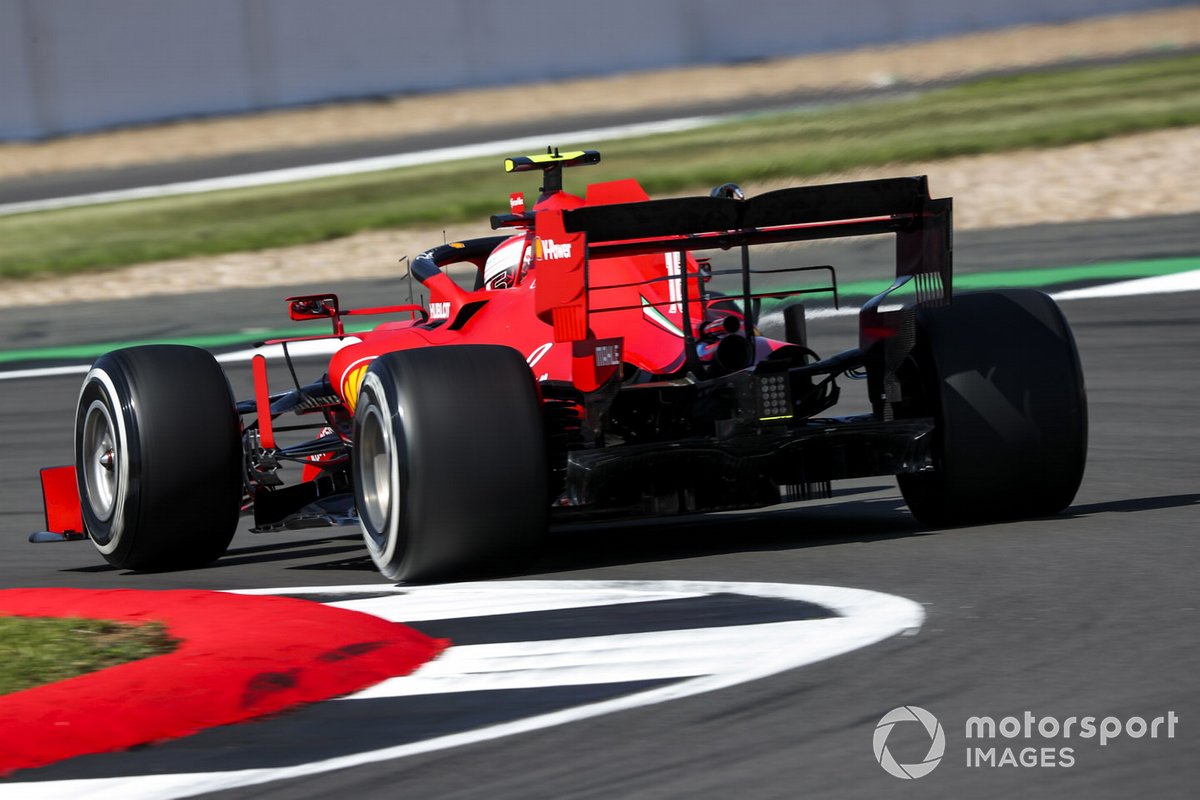 Ferrari has a low-downforce rear wing for the British GP as it looks to reduce some drag and improve straightline speed.
Racing Point RP20 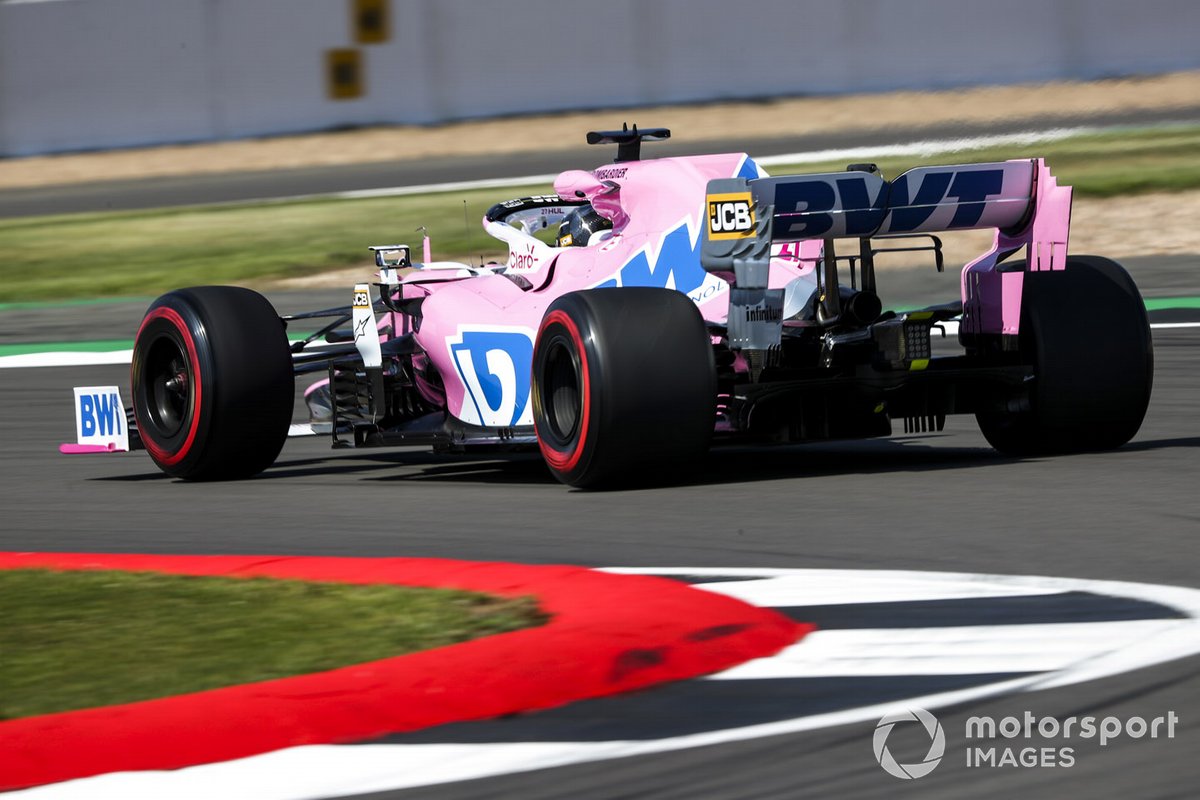 As a comparison, while Ferrari is running with as little downforce and drag as possible, Racing Point is at the other end of the spectrum, running a similar wing level and T-Wing as in the opening few races.
Alex Albon, Red Bull Racing RB16 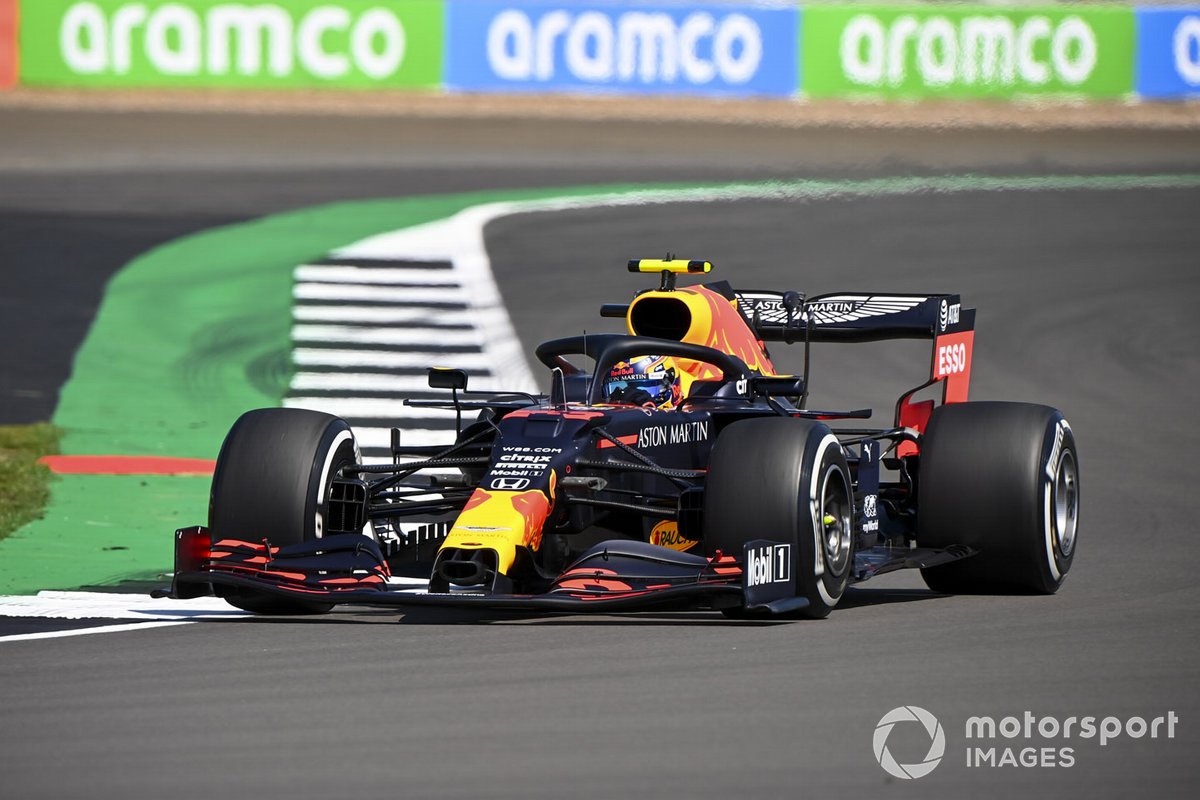 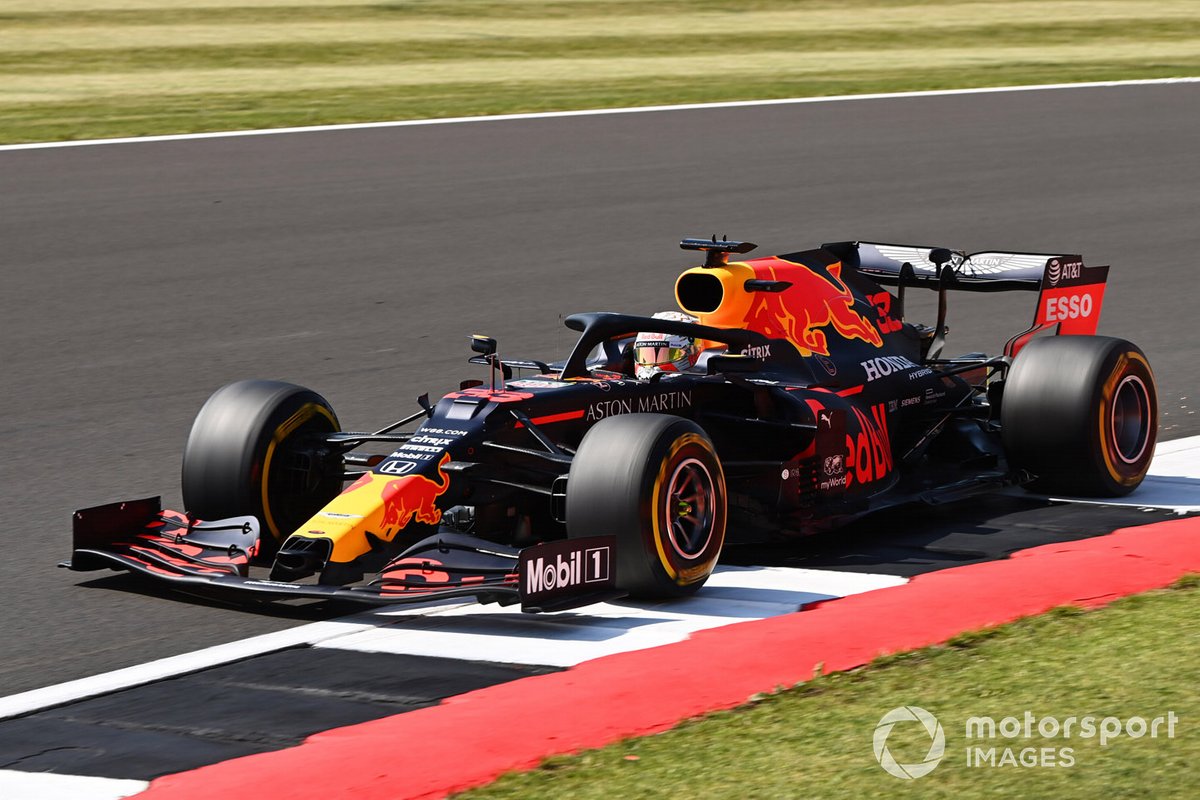 In search of answers as to which works best, the team put the new nose on Max Verstappen’s car.
Red Bull Racing RB16 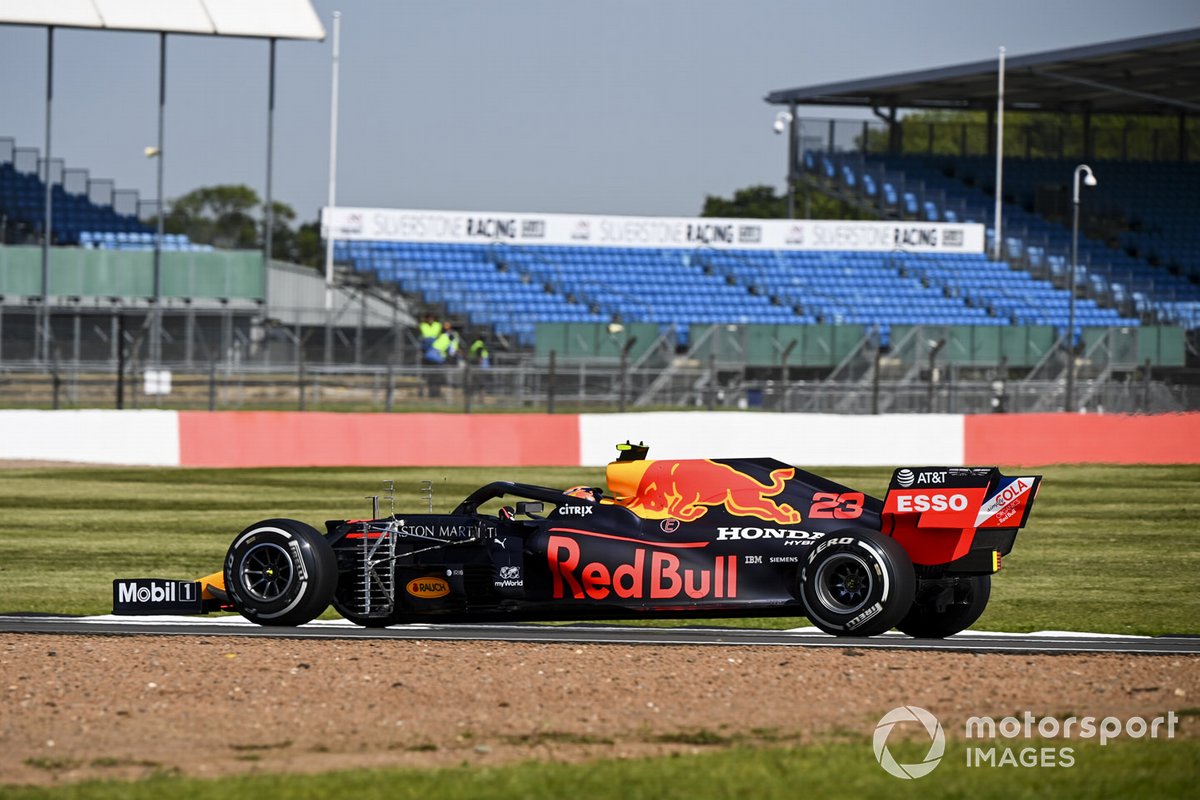 In the early stages of FP1 Red Bull ran with kiel probe rakes behind the front wheels in order to gather data to help better understand why updates aren’t performing as anticipated.
Lando Norris, McLaren MCL35 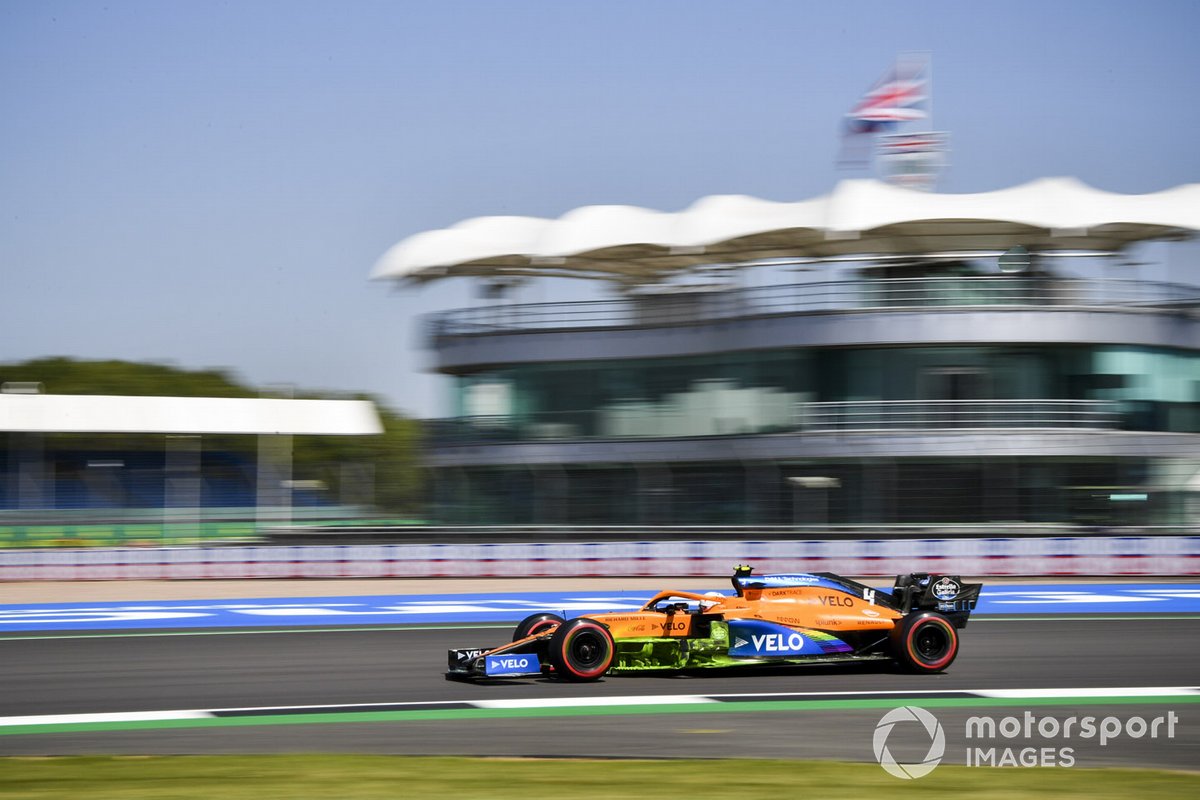 The MCL35 of Lando Norris is sprayed with flo-viz paint in order that the team can collect visual data on the flow conditions around that region of the car. This is especially important as it has new bargeboards this weekend – run on Sainz’s car for FP1, rather than Norris’s.
Lando Norris, McLaren MCL35 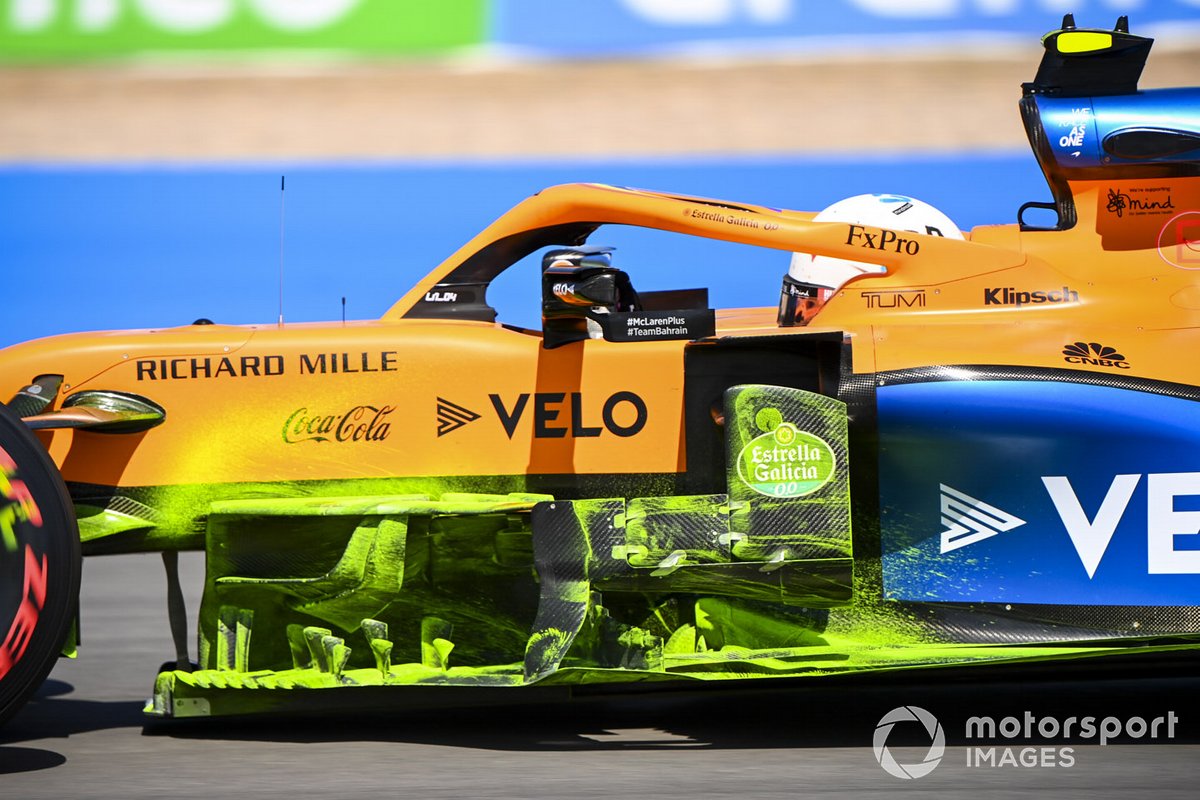 A close up of that flo-viz paint on Lando Norris’s MCL35 and the new bargeboards which feature two L-shaped appendages that connect the main vertical bargeboard to the boomerang.
McLaren MCL35 front wing flow-viz detail 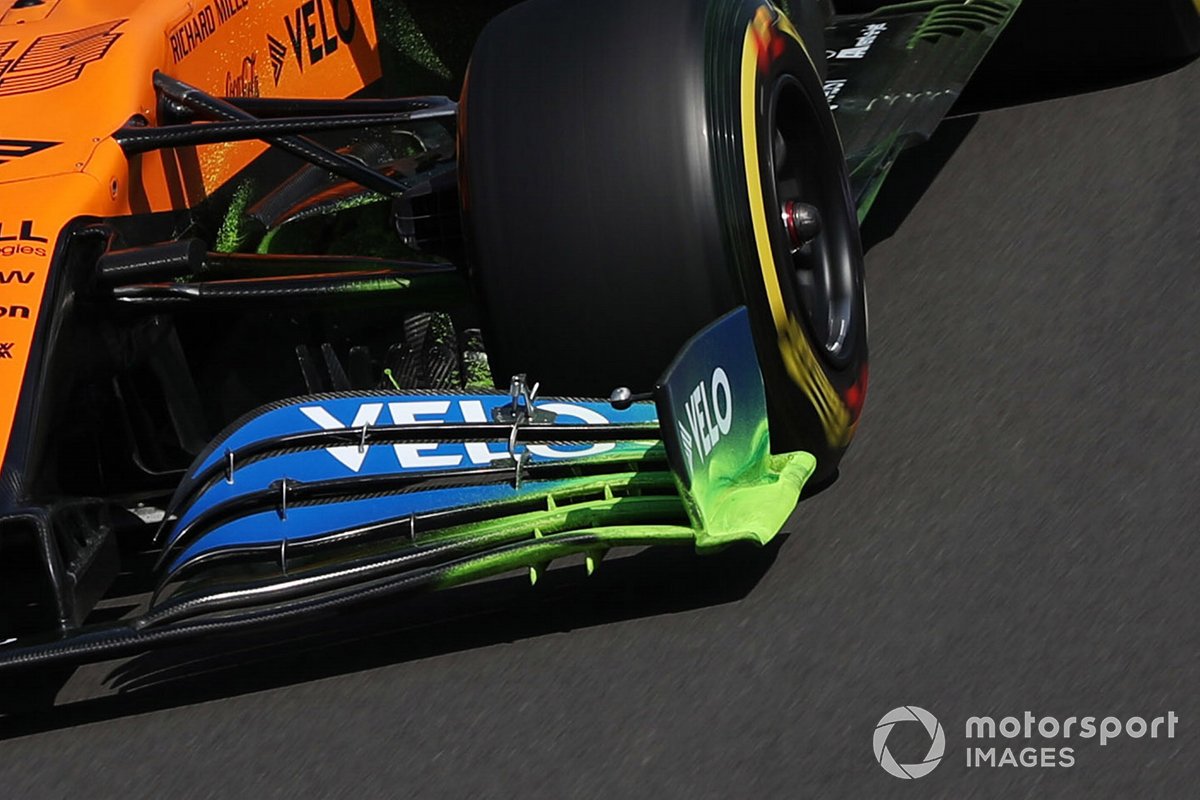 The team also ran during FP2 with flo-viz on the front wing too, as it looks to gather some visual information about the flow around the wing.
McLaren MCL35 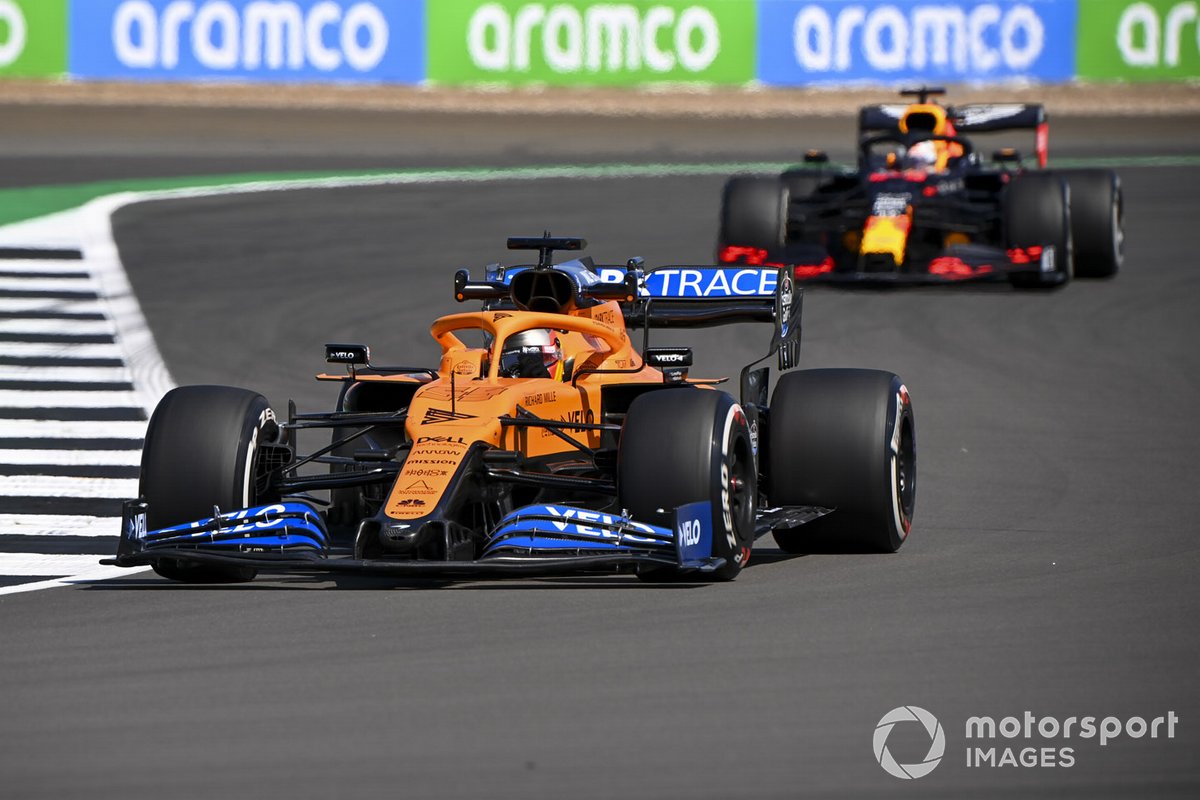 McLaren had thermal imaging cameras mounted in the airbox pods to collect data on the tyre temperatures. This helps the team to understand when and where the tyres can be pushed in order to get better performance over one lap and through a race stint.
McLaren MCL35 rear comparison 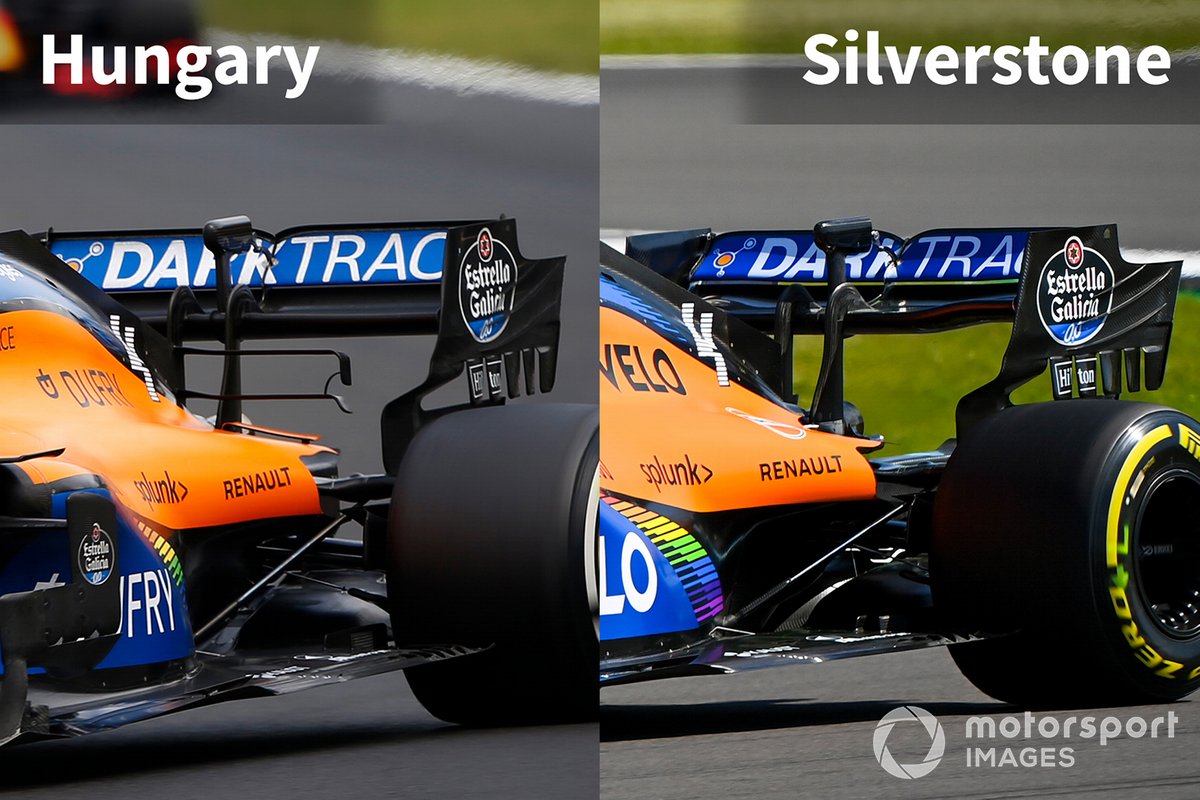 A comparison of the two rear wing specifications used by McLaren at the Hungaroring (left) and Silverstone shows the difference in downforce levels needed. There’s no T-Wing in use this weekend and the flaps above the cooling outlets have also been removed.
Nico Hulkenberg, Racing Point RP20 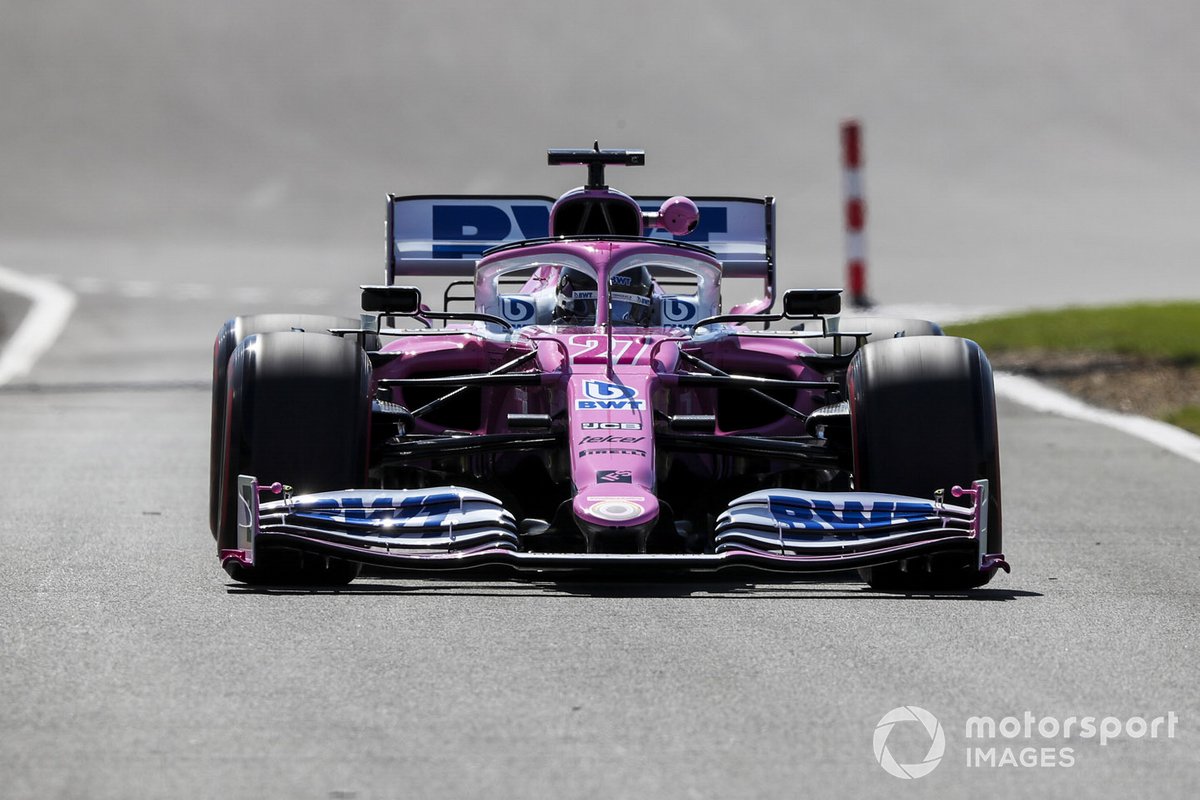 Nico Hulkenberg subbing in for Sergio Perez has additional cameras mounted in the pod that’s attached to the airbox. These thermal imaging cameras record footage that can be used to improve tyre performance.
Alfa Romeo Racing C39 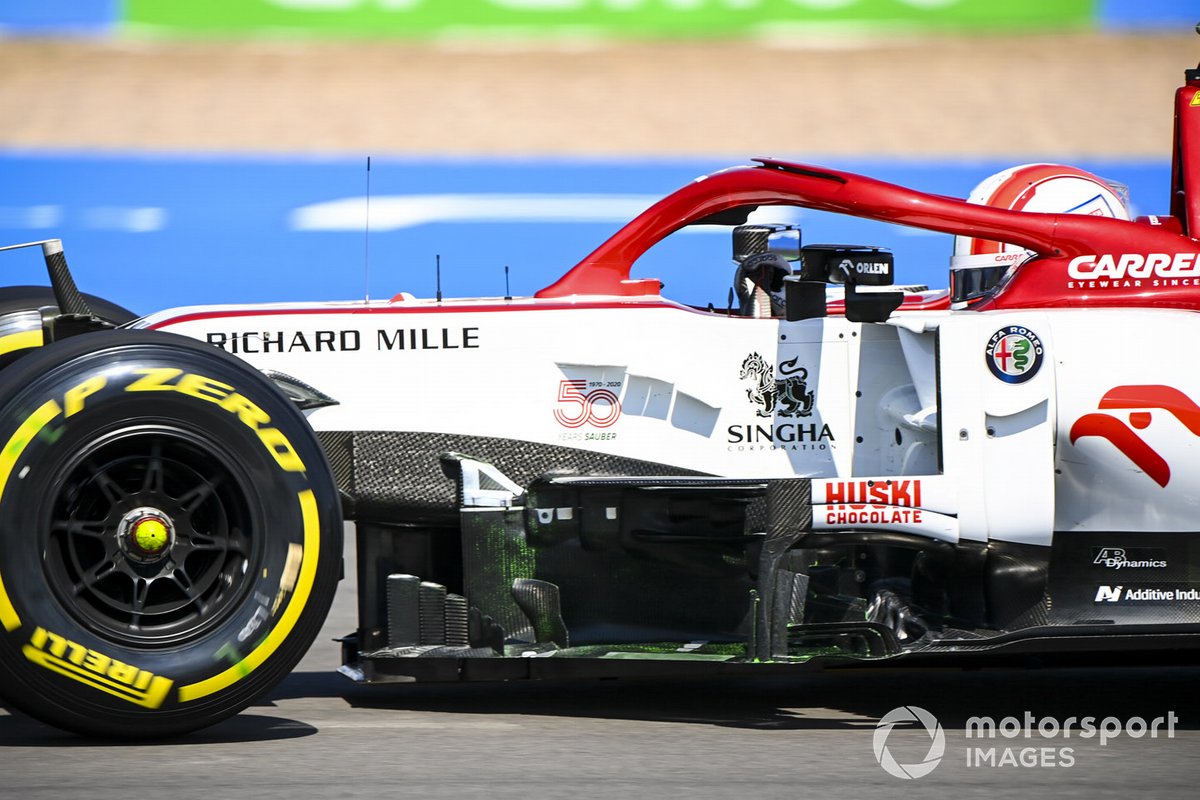 A close up of the Alfa Romeo C39’s bargeboards and the various surfaces used to improve the airflow's direction around and through the sidepods. The forward-most section that arches over to connect to the chassis is also new when compared with the arrangement used at the first races of the season.
Ferrari SF1000 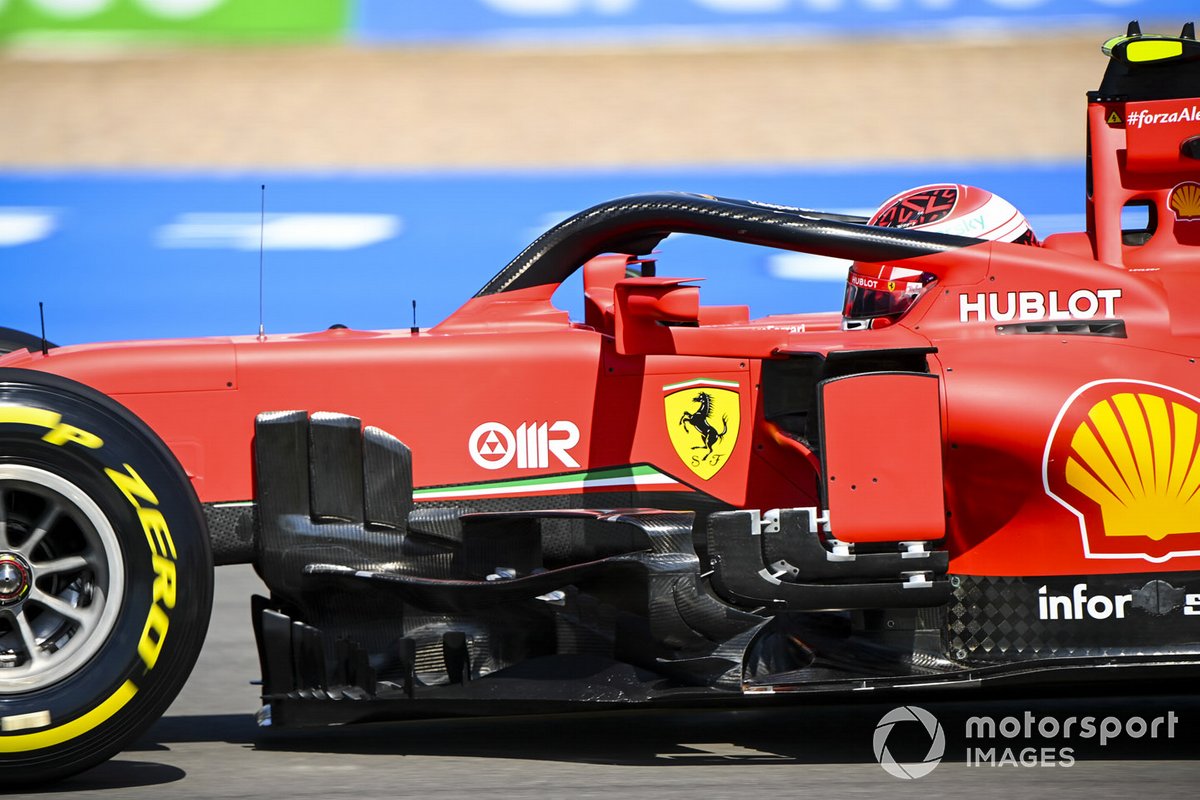 As a comparison here’s a shot of the bargeboards on the Ferrari SF1000.
George Russell, Williams FW43 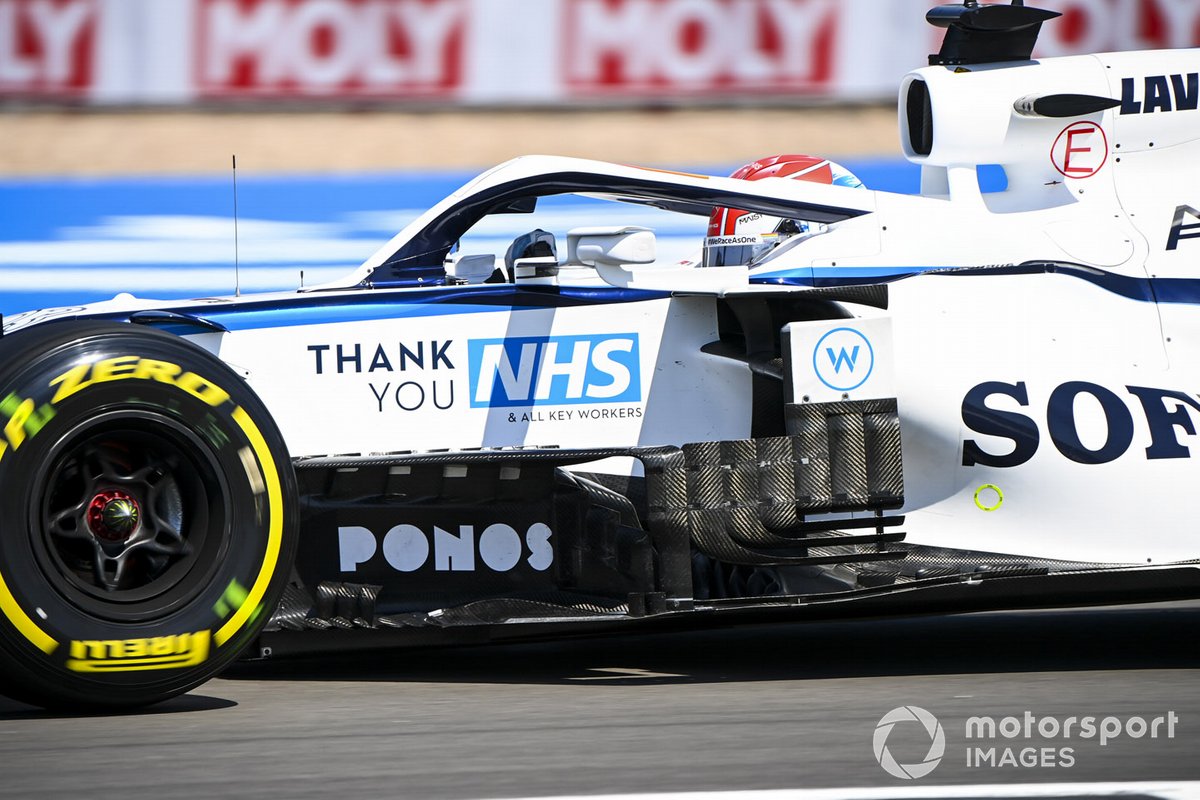 A similar shot of the bargeboards on the Williams FW43, which also has new wing mirror stalks on its car this weekend.
George Russell, Williams FW43 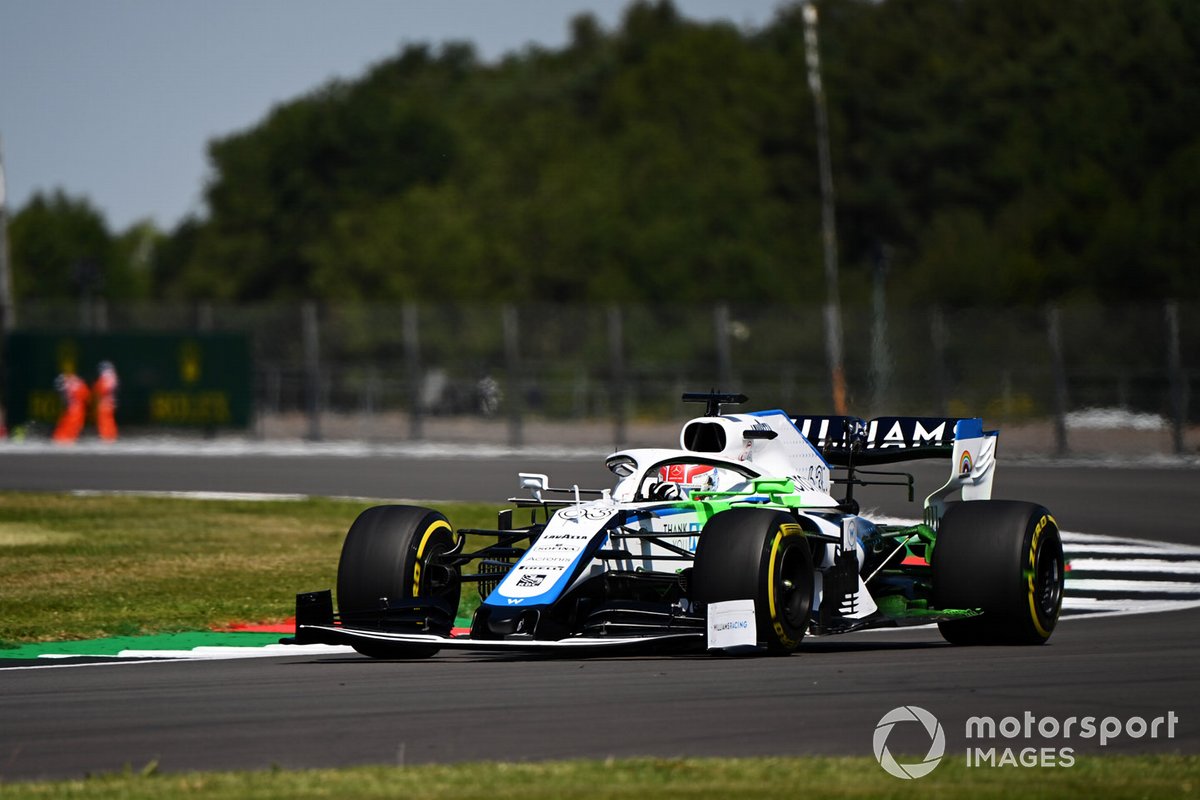 Talking of mirror stalks, here’s a shot of George Russell at the wheel of his FW43 with flo-viz painted on that area of the car, in order that the team can establish if the airflow is doing as predicted.
George Russell, Williams FW43 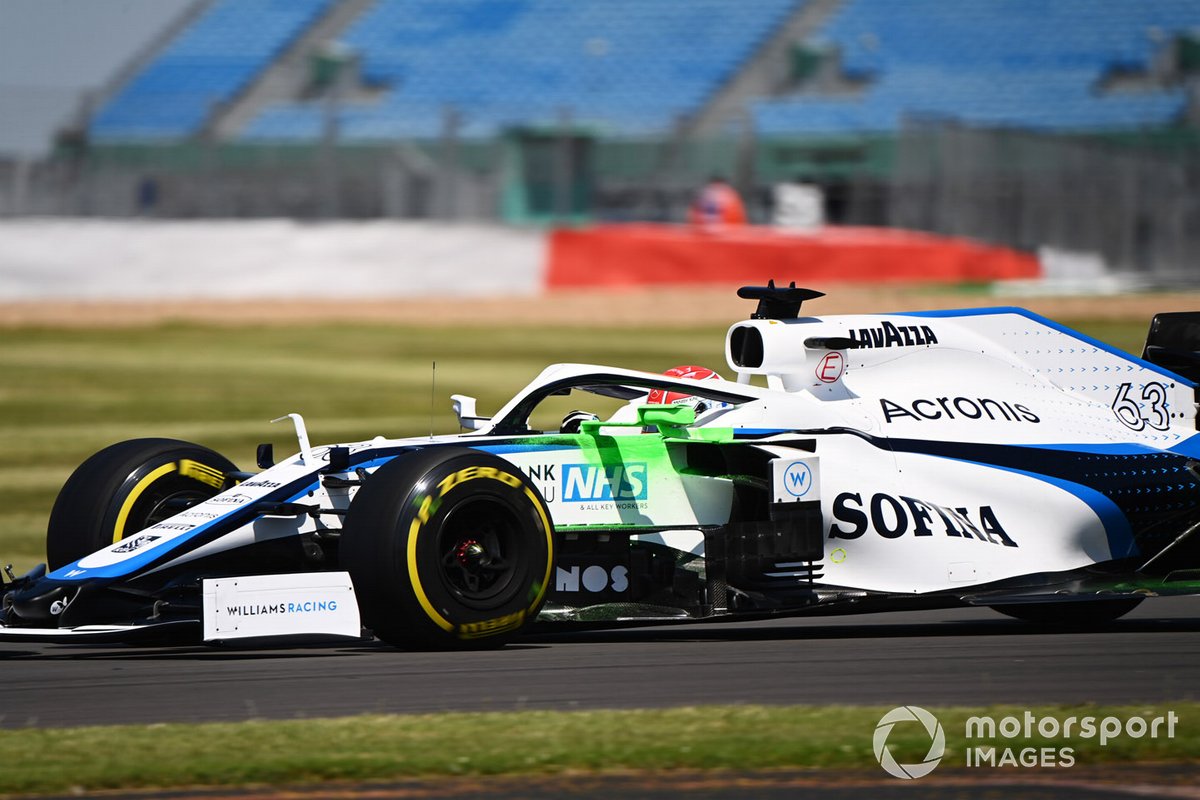 And another view of those mirror stalks, which are now squared off as they connect to the chassis.
Brake disc of Alfa Romeo Racing C39 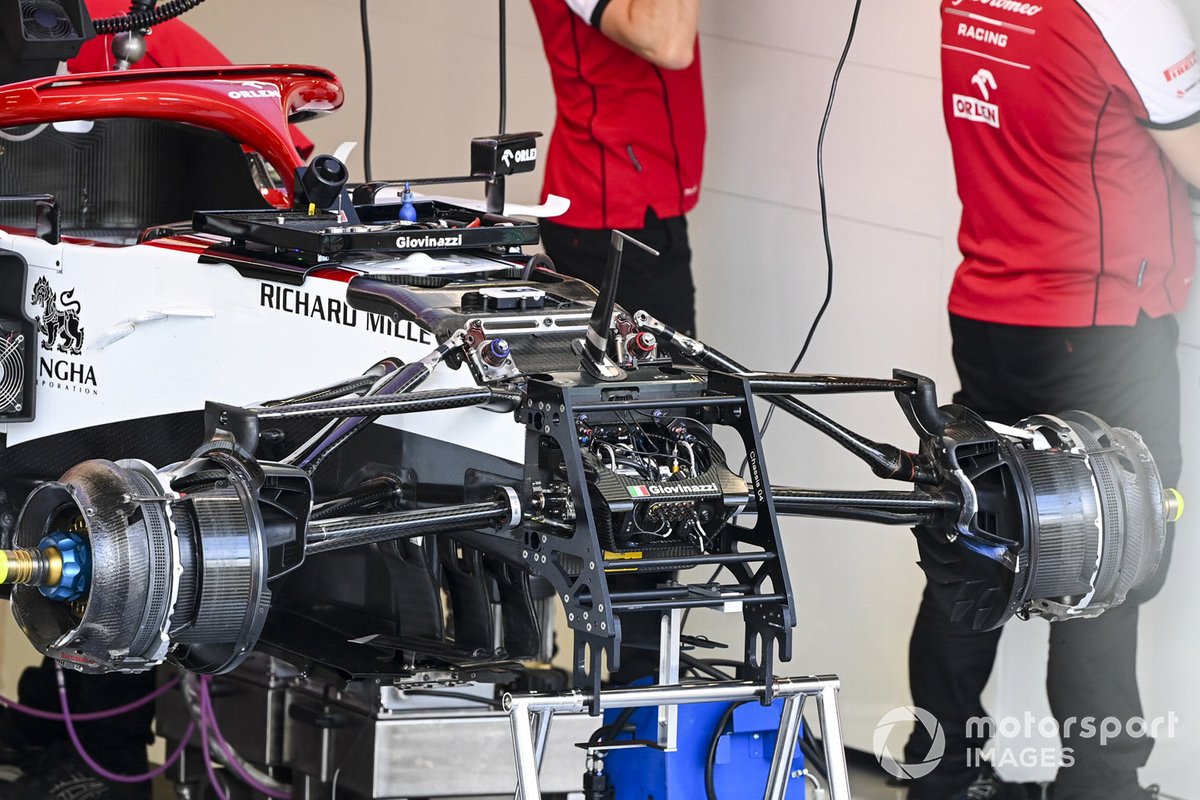 There’s plenty to appreciate in this picture of the Alfa Romeo C39 during the build-up phase, as we have the inboard suspension elements exposed and the brakes without the drums in place, revealing some of the inner pipework used to manipulate the airflow’s passage out of the wheel rim.
Front brakes of Alfa Romeo Racing C39 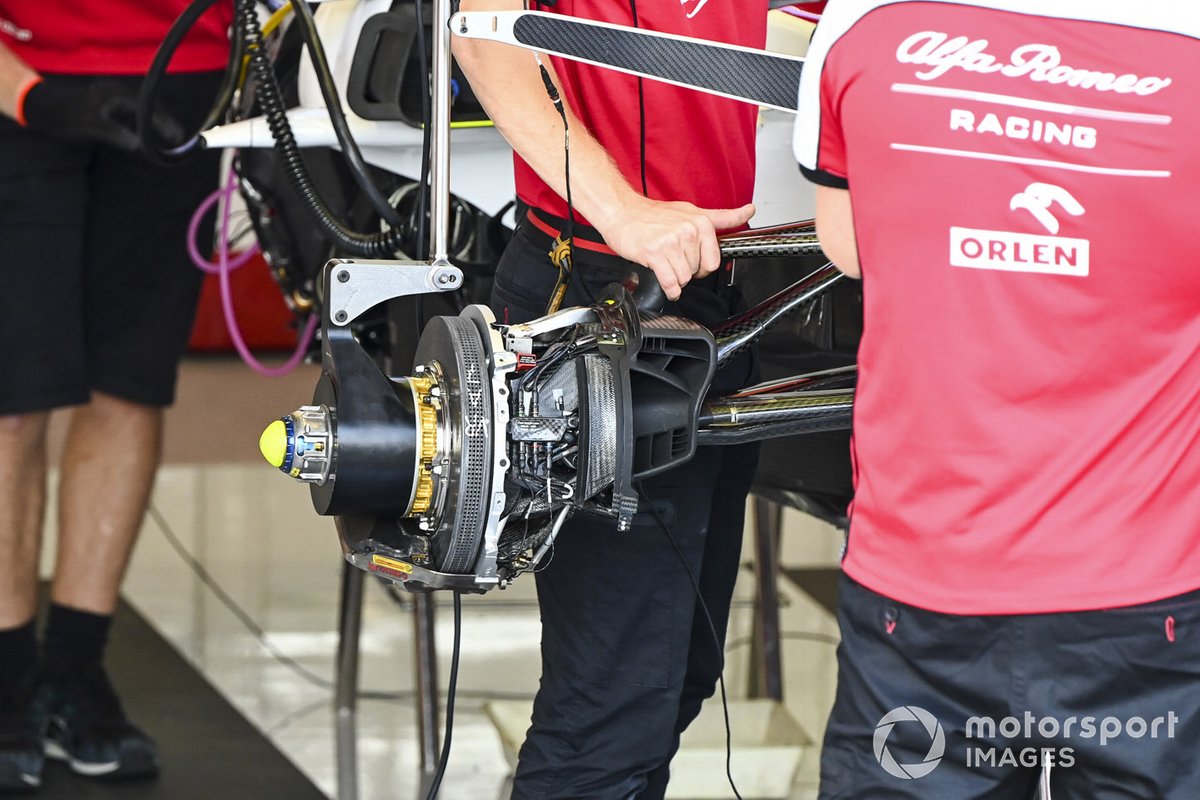 Here’s a close up of the Alfa Romeo C39’s front brake assembly in the early stages of construction and shows us just how much work goes into reducing weight from the caliper, with as much material stripped away as is possible, while also helping to improve cooling, as it’s normally wrapped by a carbonfibre duct.
Front brake of Alfa Romeo Racing C39 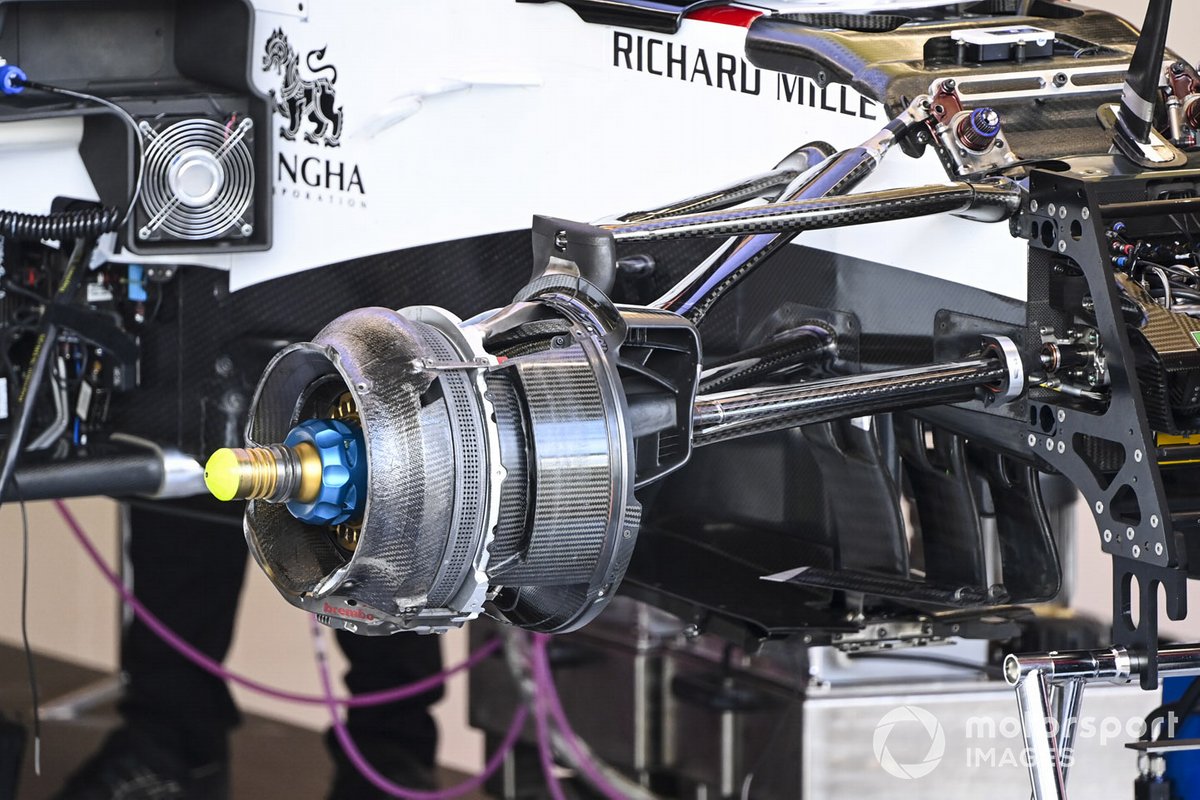 As a comparison here’s the brake assembly midway through construction with the inner carbon ductwork in place that helps guide the air to both cool the brake components and assist aerodynamically as it’s ejected out of the wheel rim.
Rear brake of Alfa Romeo Racing C39 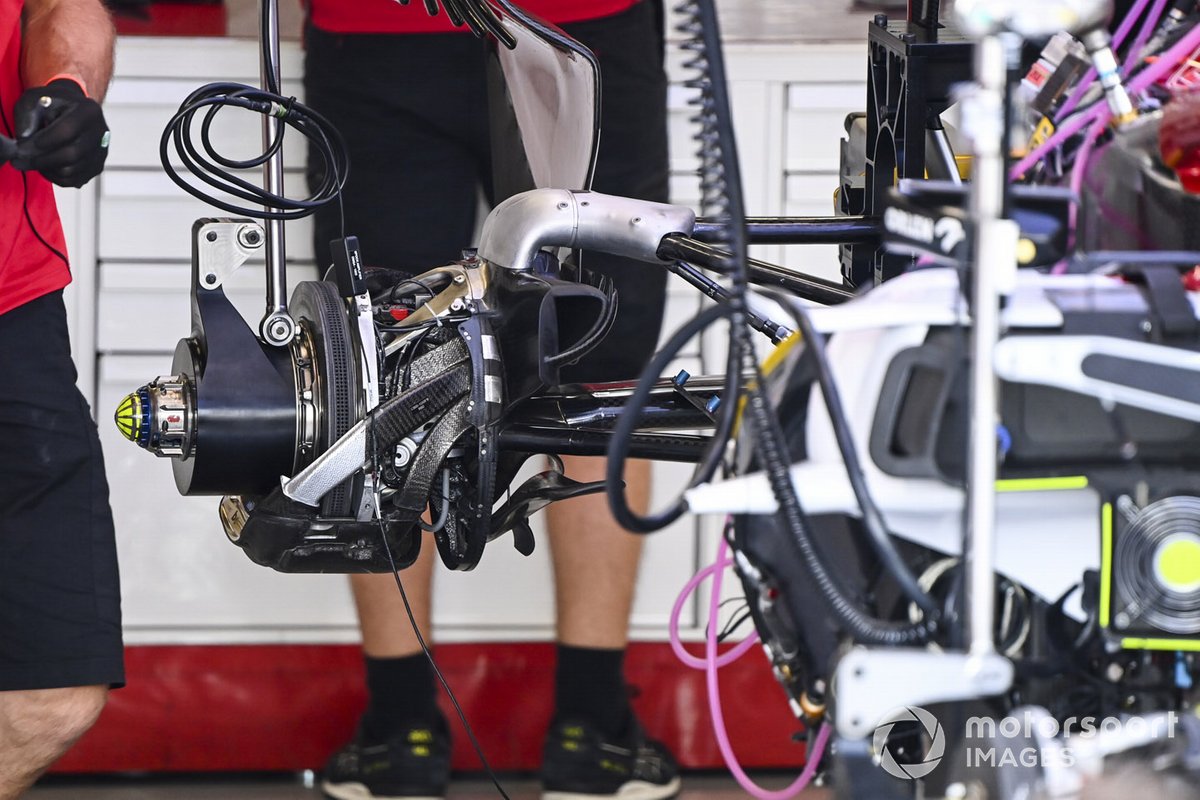 At the rear of the C39 we can see how the team deals with the various intricacies of cooling the rear brakes while also providing aerodynamic assistance. Note the two pipes fed toward the caliper in order to cool it, whilst a row of arched fins are attached to the side of the main air scoop to redirect the airflow and help generate downforce.
Renault F1 nosecones 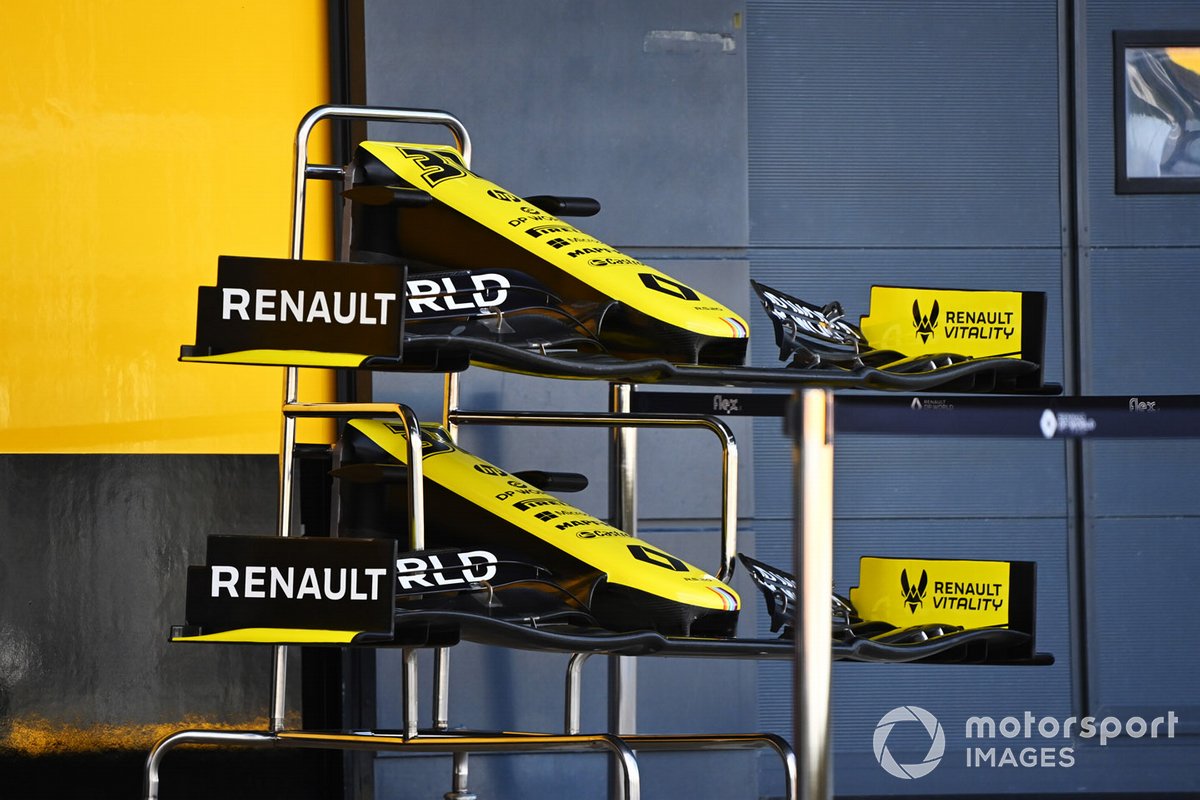 Two front wings await installation outside the Renault garage, both of which are the newer specification introduced in Austria.
A wheel gun 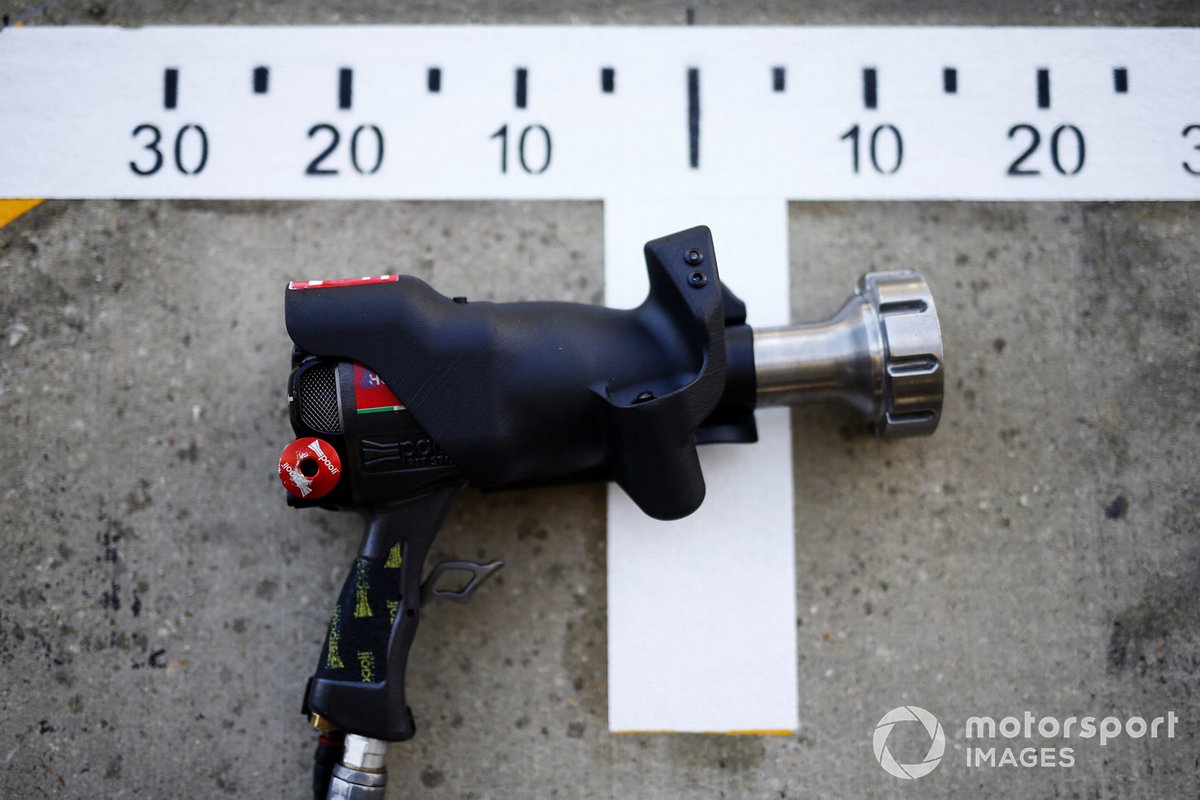 A closeup in the pitlane of an item that’s partly responsible for some of the mind-blowing pitstops. This Paoli wheel gun has been modified to feature a sleeve that makes it more user friendly for the mechanic operating it.