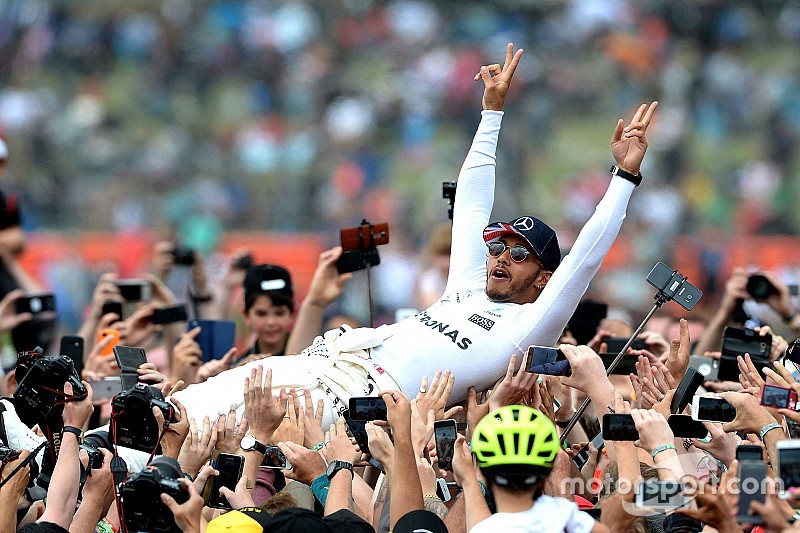 From pole position, Hamilton took an early lead after a stoppage for Jolyon Palmer's Renault on the warm-up lap, the result of brake-by-wire and hydraulic problems, caused an aborted start and an extra formation lap.

The Mercedes driver quickly built up an advantage over the Ferrari of second-placed Kimi Raikkonen, as Max Verstappen held up Vettel after passing the points leader around the outside of The Loop on the opening tour.

That was how the order at the front remained until the pitstops, where Vettel was able to undercut Verstappen and move up to third, helped by a slower stop for the Dutchman.

By the time Hamilton made his one and only stop on lap 25, he was 12 seconds clear of Raikkonen, and was never threatened thereafter as he raced to a fourth win of the season and his fifth victory at Silverstone, equalling Jim Clark and Alain Prost for British GP wins.

Raikkonen held second, but Vettel came under pressure from Valtteri Bottas in the latter stages of the race, the Finn having recovered from ninth on the grid following his five-place grid drop.

With Bottas going long on softs and then switching to supersofts, there was nothing Vettel could do to hold off the Mercedes driver, who moved ahead at Stowe on lap 43.

The Finn then set about closing on Raikkonen, who was suffering severe tyre trouble in the closing stages, and passed just before his compatriot had to make a second stop after suffering a delaminated left-front with three laps remaining.

That meant Bottas completed a Mercedes 1-2, 14 seconds behind Hamilton, while Raikkonen took third a further 22 seconds back.

Vettel had been set for fourth after being demoted by Bottas, and a potential podium after Raikkonen's dramas, but a dramatic front-left puncture for German as he entered Luffield on the penultimate lap saw him drop down to seventh.

Verstappen inherited the place, also coming in for a precautionary late second stop, followed by teammate Daniel Ricciardo, who moved up 14 places after starting on the back row to finish fifth.

Stoffel Vandoorne was the only finisher for McLaren in 11th, as Fernando Alonso stopped just beyond half-distance with a drop in fuel pressure and a subsequent loss of power.

The only other non-finisher was Carlos Sainz, who was taken out in an opening lap incident with Toro Rosso teammate Daniil Kvyat at Becketts, the Russian running off the road and tagging Sainz as he joined.

While Sainz was eliminated on the spot, Kvyat continued undamaged, but was hit with a drive-through penalty for causing the incident and ended up 15th.

Live: Follow the British Grand Prix as it happens