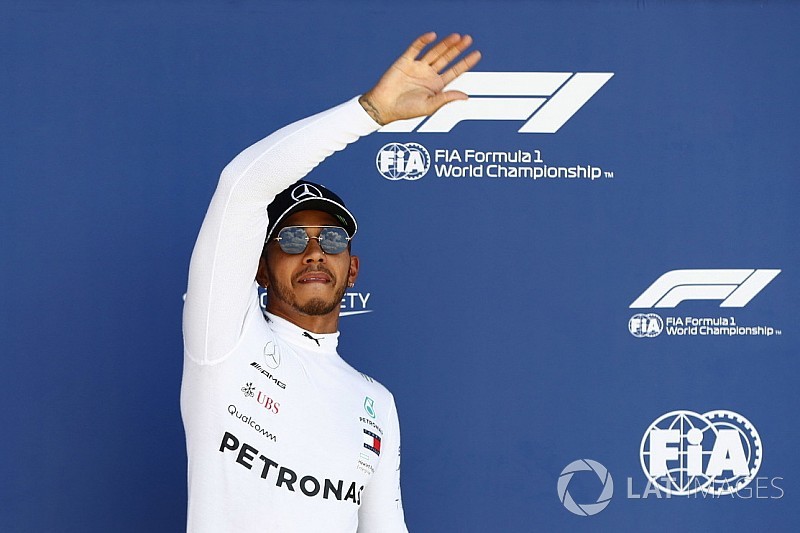 Vettel had the edge after the first runs in the Q3 top 10 shootout by 57 thousandths of a second, but Hamilton turned the tables on the second runs.

With the soft-compound Pirellis the tyre of choice through qualifying, Hamilton outpaced Vettel in the first and second sectors on the final run.

This meant Vettel's flying final sector was not enough to reclaim top spot and left the Ferrari driver second on the grid.

Vettel missed his qualifying simulation during the morning practice session with a neck problem, and admitted after his run that he wasn't sure he would have been able to run in qualifying.

Vettel's teammate, Kimi Raikkonen, qualified third and just 0.098s off the pace in his Ferrari after finding a three tenths improvement on his second run despite a lockup into the Turn 16 left-hander.

This followed complaining of losing his quick shift on his first run, and put him ahead of the second Mercedes of Valtteri Bottas.

The Australian did not have the use of the DRS on his first run, which team principal Christian Horner attributed to a glitch with the system that governs when it can and cannot be used.

The problem wasn't solved on his second run, although he was told he had manual use of the DRS provided he only activated it in the permitted zones.

Kevin Magnussen and Romain Grosjean gave Haas best-of-the-rest honours in qualifying for the second consecutive race by locking out the fourth row.

Nico Hulkenberg was 11th and quickest of those who didn't reach Q3 after lapping 0.058s behind Ocon.

With very few time improvements made on the second runs in Q2, that put Force India's Sergio Perez in 12th ahead of McLaren driver Fernando Alonso.

Toro Rosso driver Pierre Gasly was the only one of the drop zone contenders to find time on his second run, declaring himself happy he got the maximum out of the car.

This was enough to elevate him to 14th ahead of Sauber's Marcus Ericsson, who had a relatively slow run through the final sector on his quickest lap.

Carlos Sainz was fastest of those eliminated in Q1 when he was bumped to 16th by Renault teammate Nico Hulkenberg's late improvement and said he lost time owing to Magnussen locking up ahead of him into Turn 3.

That put him ahead only of the second McLaren of Stoffel Vandoorne, who shed a piece of bodywork when he hit the inside kerb at Brooklands on his first run and ended up 0.640s slower after his second attempt.

Vandoorne complained about something fundamental being wrong with the car and things not feeling right during both the morning practice session and qualifying.

Sergey Sirotkin was 18th after a spin into the gravel at Stowe on his first run, although he was able to recover and post a time on his second attempt.

Lance Stroll ended up 19th but did not set a time after spinning into the gravel at the Brooklands left-hander on his first flying lap – admitting he was "shocked" by the suddenness of the rear end snapping away.

As Stroll was unable to dig himself out of the gravel, he was forced to switch the car off and triggered a six-minute red flag while his Williams was recovered.

Brendon Hartley was unable to participate in qualifying thanks to damage sustained when he crashed at Brooklands during the morning's practice session.

This was caused by a front-left suspension failure, and the team must rebuild his car around a spare monocoque ahead of tomorrow's race for him to start from the pitlane.

Alonso: Silverstone qualifying "without a doubt" best of 2018