Nico Rosberg secured his fifth pole position in a row after beating Lewis Hamilton to the top spot in qualifying for the Brazilian Grand Prix. 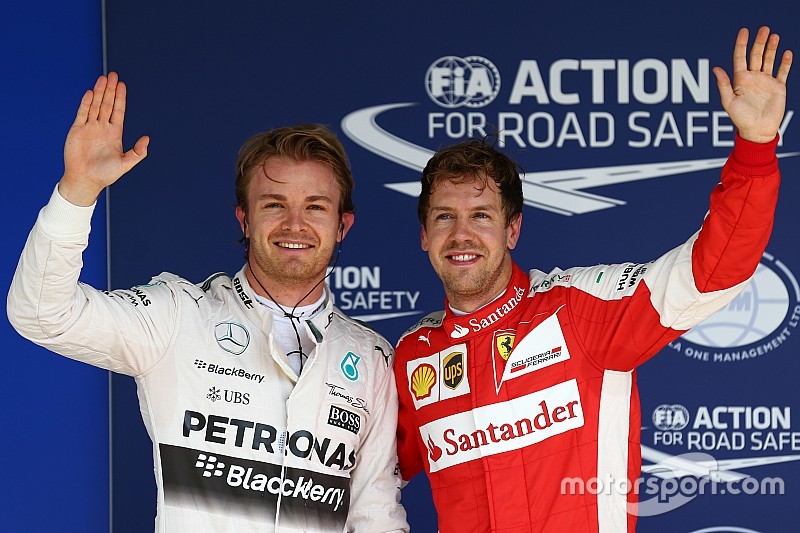 The German driver posted a time of 1:11.282, edging his teammate by 0.078 seconds to grab his second consecutive Interlagos pole.

The Mercedes duo proved to be a class apart, as Sebastian Vettel qualified the Ferrari in third, over half a second off the pace.

Williams' Valtteri Bottas finished in fourth, but the Finn will lose three places on the grid after having been hit with a penalty yesterday.

Kimi Raikkonen completed the top five for Ferrari, ahead of the Force India of Nico Hulkenberg.

Daniil Kvyat was the fastest of the Red Bull drivers in seventh, outqualifying teammate Daniel Ricciardo, who finished down in ninth behind Felipe Massa.

Toro Rosso's Max Verstappen was 10th, but will be elevated to ninth as Ricciardo will lose 10 places on the grid due to an engine change.

Felipe Nasr just missed out on a top-10 finish, the Brazilian outpaced by less than a tenth by compatriot Massa in Q2.

However, an incident between the two in Q1 is still under investigation after Nasr appeared to impede the Williams driver.

Carlos Sainz finished in 12th position in the second Toro Rosso, with Force India's Sergio Perez in 13th and Marcus Ericsson 14th in the Sauber.

Romain Grosjean also went out in Q2 after a wild moment in the dying seconds, when he went off the track while completing his final run.

The start of Q1 showed the teams were in no rush to go out, with the first car taking to the track nearly four minutes into the session.

Lotus driver Pastor Maldonado was unable to match teammate Grosjean's performance and was knocked out in Q1 by less than a tenth of a second.

Jenson Button and Fernando Alonso were once again out of Q2, the Briton finishing down in 18th position in the quickest McLaren.

Teammate Alonso had another dismal day and, following yesterday's lack of running, the Spanish driver failed to set a time after he was asked to park his McLaren before completing a lap.

Alonso, who sat on a deck chair and watched qualifying from the side of the track, will start from the back of the grid.

Alexander Rossi outqualified Manor teammate Will Stevens once again in what was the American's final qualifying of the season before Roberto Merhi replaces him in Abu Dhabi.

The Manor duo was nearly three seconds off Button's pace.