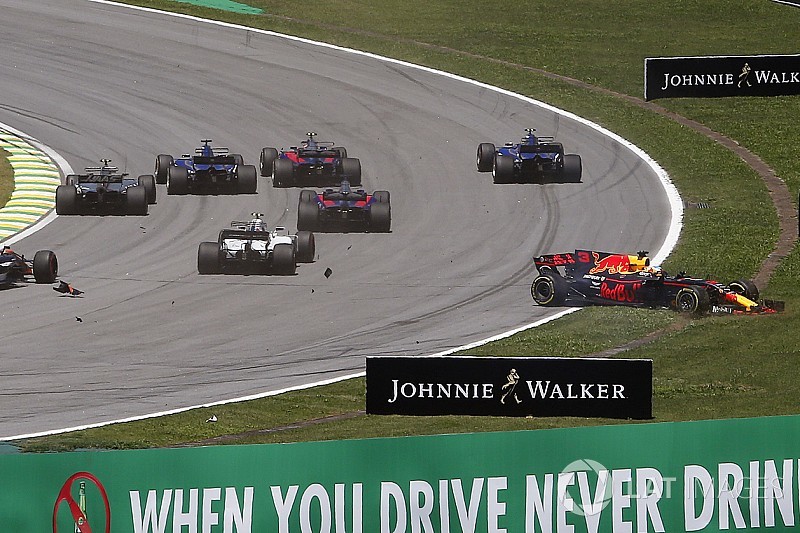 Brazilian Grand Prix stewards have deemed the three-way collision on the opening lap at Interlagos’s Turn 2, which took Kevin Magnussen and Stoffel Vandoorne out of the race, to be a racing incident.

The crash transpired as three cars touched simultaneously at the second corner of the race. Vandoorne’s McLaren was sandwiched between the Haas of Magnussen (on the inside) and Red Bull’s Daniel Ricciardo (outside), and the contact between Magnussen’s left-front and Vandoorne’s right-front corners broke suspension arms on each car.

Ricciardo, in the meantime, was spun across the bows of both cars. Amazingly, he escaped with a cut tyre, and benefited from pitting under the safety car, which allowed him to restart at the back of the pack, from where he charged through to sixth.

“From my side, we were three-wide through the corner,” said Magnussen. “There was contact with Vandoorne who then had contact with Ricciardo. I broke my front suspension, so it wasn’t the best.

“If I’d realised earlier that Ricciardo was on the outside of Vandoorne, then perhaps I’d have given more room, but by the time I saw Ricciardo it was too late. I’d already carried the speed.”

Ricciardo added: “Into Turn 2 I knew it was going to be tight, but I thought it was a good chance from the start to overtake a bunch of cars, so I tried the outside – I was holding on, holding on, and then I felt a hit.

“Obviously I was worried that I had damage, I think the tyre had a cut, so we came into the pit to change that.”

Vandoorne rued his early exit after making a good start: “I had a very good launch, almost straight past the Force India and the Haas. It was very tight with Esteban [Ocon] and with Romain [Grosjean], nearly avoiding an accident there. We had a good first corner and then it bunched up.

“Unfortunately, I got squeezed in Turn 2. We were in the middle of a sandwich and there was nowhere to go for me. I was just a passenger. We had contact and that was an unfortunate end to our race.”