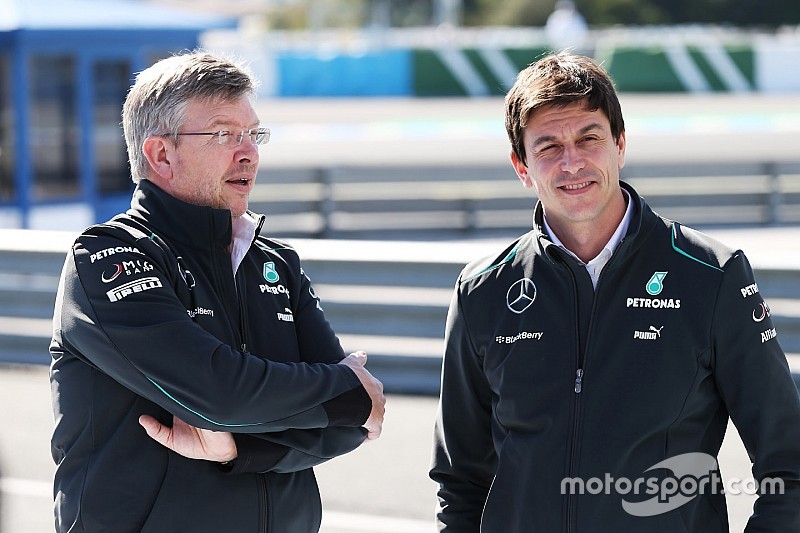 Ross Brawn says he left Mercedes at the end of 2013 because he could not trust Niki Lauda and Toto Wolff, who had been added to the management team by the Stuttgart manufacturer.

Brawn, who sold his team to Mercedes after the successful 2009 season, explains the reasons for his departure in his new book, Total Competition.

In it he discusses his career at length with co-author Adam Parr.

"What happened at Mercedes is that people were imposed on me who I couldn't trust," Brawn says.

"I never really knew what they were trying to do. I mean Niki would tell me one thing, then I would hear he was saying something else."

Brawn then recounts the story of Wolff making critical comments about him in a conversation recorded by former F1 team boss Colin Kolles.

"So I was beginning to deal with people who I didn't feel I could ultimately trust; people within the team, who had let me down already in terms of their approach.

"Then in early 2013, I discovered Paddy Lowe had been contracted to join the team and it had been signed off in Stuttgart. When I challenged Toto and Niki, they blamed each other. I met them to have it out with them. And they both pointed to each other…"

He adds: "I couldn't trust this people, so I saw no future unless I was willing to go to war and remove them. I saw no future with people that I didn't feel I could trust."

Brawn points out that he had not previously been in an "us or them" situation at a senior level in a team: "I have never faced that and maybe I just didn't feel passionately enough about the whole project to want to go through that grief."

Brawn says he didn't understand why as well as being given management roles, Lauda and Wolff also became shareholders in the Brackley team.

"I think one complication in all of that was Toto and Niki became shareholders, which was an interesting decision by Mercedes. I never really understood it.

"Their view was that they wanted management who were committed and I think they also took a view that by being shareholders they would gain greater respect from the team.

"That they partly own the team, so by coming in and being a shareholder they were putting their money where their mouth was. That's what they hoped."

Total Competition is published by Simon & Schuster on 3 November.

Dennis's future at McLaren in doubt