Formula 1 could get rid of its extravagant motorhomes at European races in the future, as part of its effort to make the sport carbon neutral.

Last year, F1 announced plans to go carbon neutral by 2030 by reducing emissions of the cars as well as switching to more efficient logistics and travel for the grand prix circus.

While its plans are ambitious, F1 chiefs are optimistic that it is a realistic target and work has already begun on working out how it can best be achieved.

F1 managing director of motorsport Ross Brawn says that the sport is considering using different forms of transport – including more trains or sea freight – and that the days of excessive ‘gin palace’ motorhomes being driven around Europe could be numbered.

“Then there is motorhomes. We all go to a grand prix and for nine races of the year we have motorhomes carted around by trucks, a large fleet of trucks, that give the teams the facilities they need.

“For the other 15 races, they are quite happy to use whatever's there when they turn up on Thursday.

“We go to overseas races, for example we go to Baku, and you have a nice set of prefabs all laid out for you. Nobody complains, and it is all workable.

“Then we go to Monza and we have our gin palaces with all the trucks that are needed to transport them. So in the future, we want to move to a motorhome or hospitality facility which could be put up with far less impact in terms of logistics and transportation than we have now.”

As Motorsport.com revealed last year, there are a total of 315 F1 trucks used by teams, Pirelli, F1 and the FIA at European races. The main support series account for 60 more – which represents a massive amount of diesel mileage.

Further adding to the impact is the fact that the calendar is not structured in a way to minimise distance covered.

When F1 races in Austria, Budapest is just 400km away. However, instead of heading straight there, the entire circus travels to Silverstone and then back to Hungary – a round trip of some 3400km.

The difference between those 375 F1 and support event trucks travelling 400km or 3400km equates to some 1.125 million kilometres of extra diesel usage. 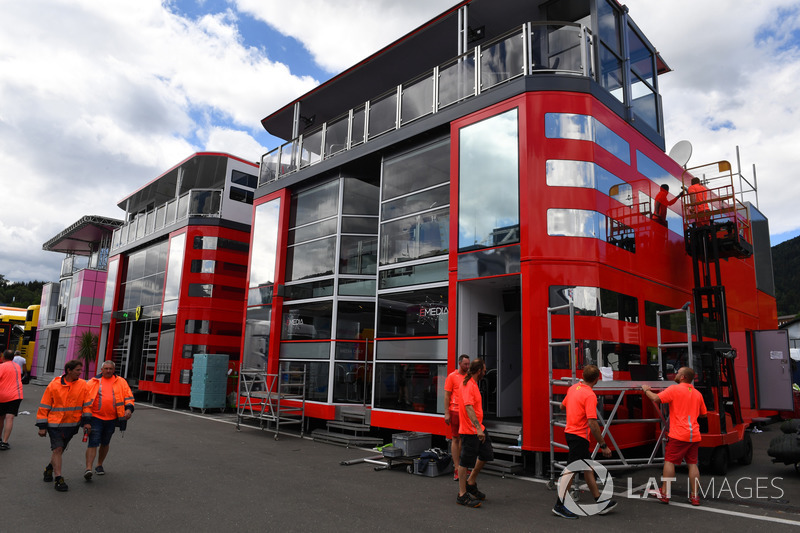