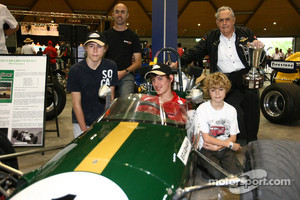 Sir Jack Brabham with his grandchildren, and David Brabham in 2009

A worldwide monitoring service will in future flag-up any individual or organisation seeking to register the Brabham name without the family’s consent. The iconic Brabham logos, synonymous with the family’s 60-year motor racing heritage, are also protected.

David Brabham commented: “I’m delighted that this situation has finally come to an end. It’s been a long and tiring battle, but this was something I felt we needed to do to protect the Brabham name.

“The global brand stands for success and innovation bolstered from 60 years of racing heritage, and deserves to be protected. That respected reputation is built on four Formula 1 drivers’ and two constructors’ titles, while the legacy has continued with myself, Geoff and Gary, adding two Le Mans victories, two American Le Mans Series titles, four IMSA GTP Championships, F3 and F3000 crowns, plus various national and international accolades across the echelons of the sport.

“This ruling will not only help future plans for the Brabham brand, but also protect the third generation of drivers, in Sam and Matthew, coming up through the ranks.”

Triple Formula 1 World Champion, Sir Jack Brabham commented; “I am delighted that the legal action brought against Mr. Trick has been successful and that the rightful transfer and protection of the registered trademark is now complete and back in the family’s ownership. David has been tireless in pursuing this action in the interests of the entire family.”

What to make of Helmut Marko's comments about Mark Webber?

Raikkonen could have kept improving in rally - Hirvonen