Bottas says he might take more risks from now 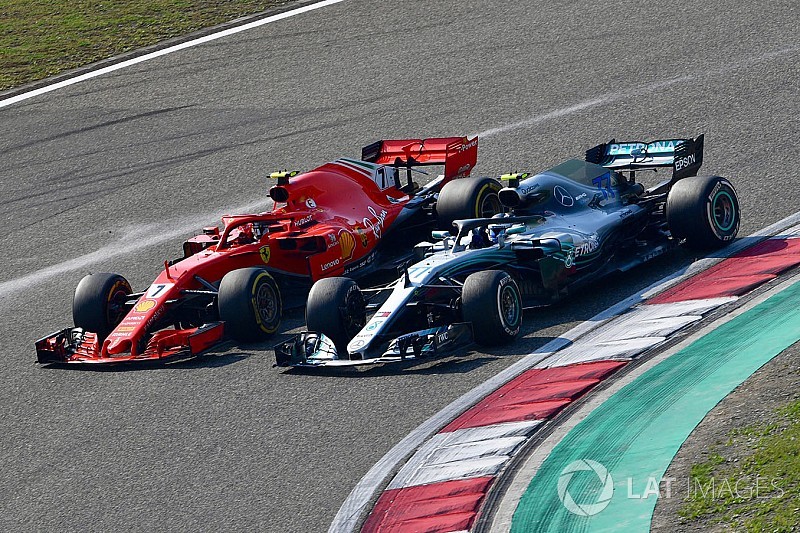 Valtteri Bottas says he might take more risk next time he is in the sort of fight he lost to Sebastian Vettel in Formula 1's Bahrain Grand Prix.

The Mercedes driver caught Vettel in the closing laps at Sakhir, but when he had the chance to make an aggressive move at Turn 1 at the start of the final lap, he didn't take it.

Asked what he would do in the same circumstances, he admitted that he might take a different approach.

"That's a good question," said the Finn. "I was not happy at all with a second place, even though otherwise I felt it was a decent race for me [in Bahrain], but second place was not enough.

"And yes, maybe I'm willing to take a bit more risk for that than before, but of course we need to remember it's a long season ahead."

Bottas insists that there is no panic at Mercedes despite the lack of a victory in the first three races, and says that the run of frustrating results has provided extra motivation.

"We always knew it was going to be tough, and yes, we're disappointed not to win a race so far in the first three races," he said.

"But this is the game, this year it's going to be extremely tough, there's always going to be six cars at least fighting for the win, and you really need to get everything perfect to make it happen.

"And we haven't made everything perfect yet. It doesn't panic us, it motivates us, that's what I've seen. In Bahrain we got very close to the win, also in China, without different situations with safety cars.

"The speed we've had is extremely close with Ferrari and Red Bull, we just need to keep it together and try and find any small performance gains, and I'm sure it will come."

Bottas admitted that getting to the bottom of the team's tyre issues has not been easy.

"I think for us the main thing has been being able to focus on extracting more performance from the very soft compounds," he explained.

"That's going to be the priority for us, and the car has been much more happy with the harder compounds.

"It has seemed like Ferrari and Red Bull in more variations of conditions they've been able to hit the peak, and we've been sometimes searching for it a little bit more."

Bottas, who is only five points behind Lewis Hamilton in the world championship, believes he is now on the same level as his teammate.

"I think we are starting the weekend here with an equal feeling as teammates, that we're both the leading drivers, there's never going to be one or two," he said.

"I've been able to kind if just continue from there. Performance-wise I've had some good races this year. I just keep going like I've always done, keep learning from every single mistake."

Force India drivers told to hustle rivals, not each other