Bottas says cooling miscalculation hurt him in the race 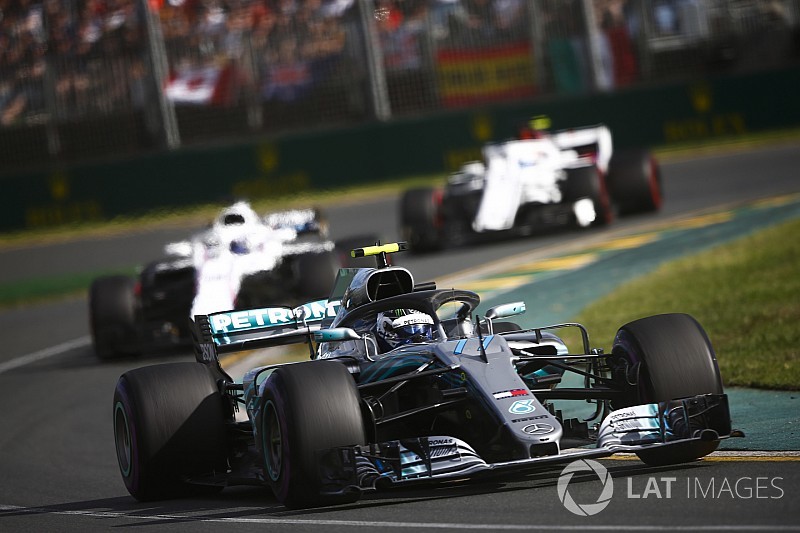 Valtteri Bottas believes a miscalculation in his car's cooling may have cost him a better result in Formula 1's season-opening Australian Grand Prix.

Mercedes driver Bottas started the race from 15th place on the grid after needing a new gearbox following his crash during the third segment of qualifying on Saturday.

Although Mercedes appeared to have the fastest car in Melbourne, Bottas could not progress much, finishing down in eighth position, behind four Renault-powered cars.

The Finn struggled to overtake his rivals and revealed after the race that overheating issues with his engine were forcing him to ease off every couple of laps, making it impossible to maintain the pressure on the driver in front.

"We expected it was going to be difficult, and we knew that you need a big pace difference delta to overtake if the other guy doesn't do any mistake, and especially if there's a train of cars like I had in the whole second stint," said Bottas.

"There was not a lot of things happening that were really helping me.

"I think with the VSC maybe I gained a little bit, stopping under that, but other than that it was a pretty frustrating race in the end because we do have a good car but there was nothing I could do.

"On top of that what was really limiting us today was overheating. I think there was something wrong with the calculation for the cooling we estimated for today so I couldn't really be close to other cars and couldn't put pressure on other cars for long.

"I could only do about two laps and then I had to back off and try again."

The Mercedes driver also reckons the gap between Mercedes and its rivals is not as big as it used to be, something that made things even harder for him.

"The engine difference is not massive anymore," Bottas added. "We still have a bit of an advantage over Renault, but it's not massive and those cars, they are not too bad in the corners. I couldn't get any closer really.

"All the teams are closer so that makes it difficult."

While Bottas conceded the safety car period played in his favour, he thinks it did not make a difference to his result.

"I think it didn't make much of a difference. I think maybe it helped a little bit to create an opportunity for the restart but nothing really happened. I think the end result was not so different with or without."

Ferrari not yet "a true match" for Mercedes, says Vettel