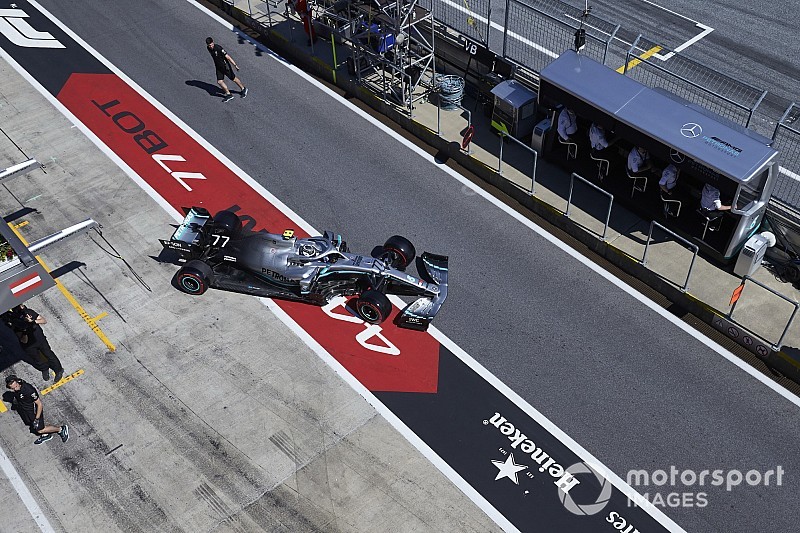 Valtteri Bottas felt a small miscommunication with his Mercedes Formula 1 team hindered him as rivals “parked” on track before their final runs in Austrian Grand Prix qualifying.

Bottas was dumped from second to fourth at the end of the top-10 shootout at the Red Bull Ring, as teammate and title rival Lewis Hamilton and the Red Bull of Max Verstappen overhauled him.

The Finn revealed on Saturday evening that he compromised his final run by being too close to poleman Charles Leclerc’s Ferrari because he thought he would run out of time to start his lap before the session ended.

“It was a messy Q3 in terms of traffic and we already left it quite late to run in the first one and then you get some cars backing off,” said Bottas, who will start third after Hamilton’s three-place grid penalty.

“The first run was all good on that side and the second run, pretty much everyone was parked in the last sector.

"We did have a bit of an issue with communications as well. The message for me was that it was going to be super close at the last corner after he [Leclerc] got ahead of me.

“Then I was right behind him, going super-slow and a bit too close to him. I got a very poor exit from the last corner so already had lost a chunk of time into Turn 1 and then the tyre grip wasn't there as we were cruising around sector three.”

Bottas said Mercedes has been “quite on the limit” getting the soft tyre to work all weekend and the imperfect preparation for his final run meant he “couldn’t get it into the sweet spot”.

“It was just a bit messy,” he said. “We’ve already had a quick debrief and discussed the complications and for sure it’s something we've learned today in terms of what information I need.

“When I crossed the line there was still a margin of 10 seconds, so I could have easily left a bigger gap earlier and carried more speed out of the last corner and had warmer tyres.”

The two Mercedes were released for their final runs towards the back of the queue of cars in a bid to pick up a tow and reduce their straightline speed deficit to Ferrari.

That left Bottas and Hamilton at risk of being caught out by the traffic jam and team boss Toto Wolff admitted it was “between a rock and a hard place”.

“You want to do the best out-lap in terms of tyre preparation and have a free track in the corners,” said Wolff.

“But equally because of the lack of straightline speed we need the tow in order to make up the lost time up to Turn 3 and down to Turn 4.

“It’s always a compromise. It’s not ideal to be behind the other car. But when you’re left without weapons on the straight, it’s maybe the only chance you have.”

Gasly "upset with myself" after costly Q3 error