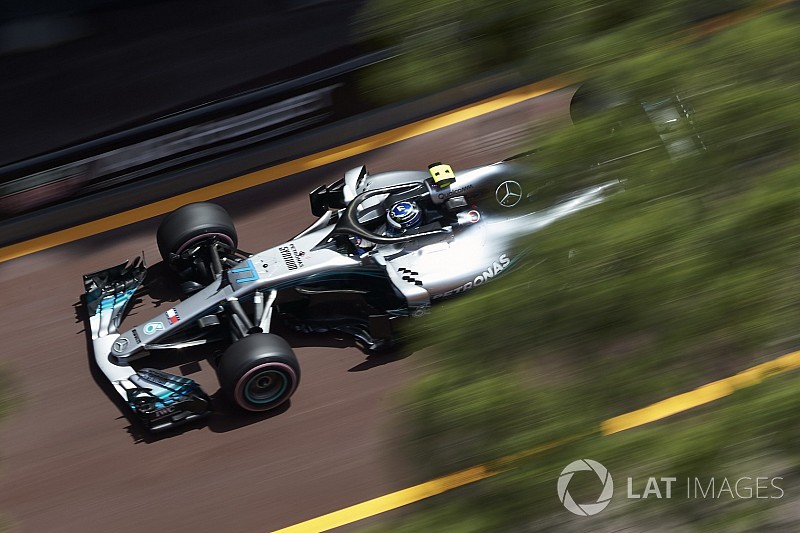 Valtteri Bottas says Mercedes needs to understand better how to work the hypersoft tyres in races, after failing to get on top of it at the Monaco Grand Prix.

The team tried to avoid using the hypersoft in the race by running both cars on the ultrasofts in Q2.

The cars did not have the pace to progress to Q3, however, so Bottas and team-mate Lewis Hamilton had to use hypersofts, which meant that they had to join the rest of the top 10 qualifiers in starting on them.

Hamilton dumped his hypersofts as early as lap 12 of the race, while Bottas waited until lap 17.

Bottas admitted Mercedes needs to get on top of the issues for Canada, where the hypersoft will be used again.

"It is a nice tyre for qualifying but for the race it is very difficult to keep it alive and avoid the big degradation and graining," Bottas said.

"We will analyse everything we can from this weekend because I think other teams could operate the hyper better than us in the long runs, and that is something for us to learn for Montreal, if we cannot qualify with any other tyre in Q2."

The team split its strategies for Monaco, with Hamilton going to the end on ultrasofts, and Bottas taking the supersoft.

The Briton finished the race in third, while the Finn was fifth.

Bottas felt, however, that it was the car, and not the tyres, what left Mercedes unable for pole or victory.

"I think honestly with the hyper for us in the race was the weakness, I think," Bottas added.

"Otherwise we have managed to get them to work pretty well. I think the ultra and super we could work them as we should.

"Honestly [the supersoft] was a surprise for us in the race. On Thursday it didn't look anything that special, so it looked okay. It was definitely the best tyre to be on.

"I think it is just the hyper, how quick it degraded that was the issue for us.

"I think the pace this weekend back in qualifying, why we were not fighting for pole it is not the tyres, it is more the car and how it is. It is just not quick around this track."

Bottas admitted that he was surprised by the marathon 37-lap opening stint achieved by Pierre Gasly on the hypersofts, which helped the Toro Rosso driver to a solid seventh place.

"I think it was impressive how long stint they could do with the hyper so for sure they were doing something better than us with that tyre," he said.

"I think the weakness for us this weekend was the long run performance with the hyper and general lack of pace with the car."