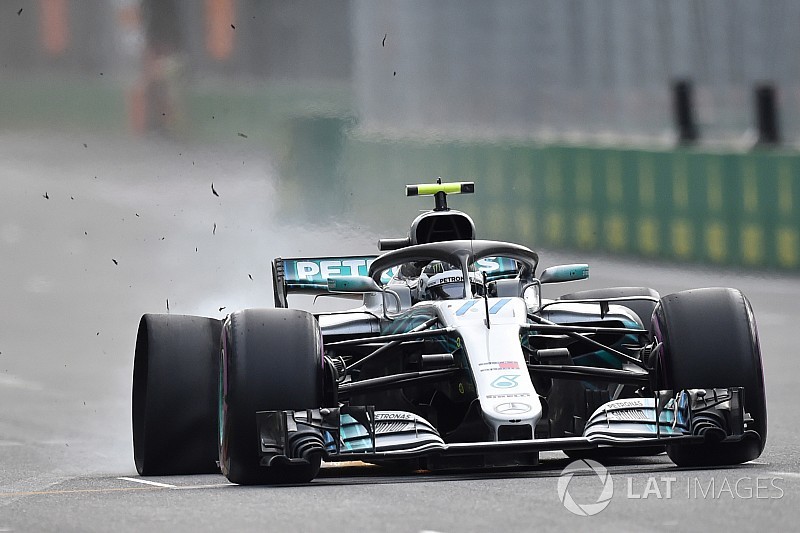 Valtteri Bottas says he had the Azerbaijan Grand Prix “under control” until sustaining the puncture that took him out of the lead with a handful of laps remaining.

Bottas had managed the final restart of the race, having jumped ahead of Sebastian Vettel by pitting under the safety car when Red Bull teammates Daniel Ricciardo and Max Verstappen collided.

The Finn steered around Vettel when the Ferrari man overshot the first corner, and looked set to take his first win of the season when he picked up a right-rear puncture due to debris on the start/finish straight with three laps remaining.

“It’s just unfortunate and unlucky,” said Bottas. “I think this track is difficult, street circuits in general with a lot of crashes will always be an issue, this time [it] was so unlucky.

“I had no idea at any point that I ran over any debris, I didn’t see anything, I didn’t feel anything, so I was just very, very unlucky.

"It felt [like] a good race to then, safety car restart everything was under control. I could pull a bit of a gap, then this happened – I just had no idea that I run over some debris, can’t say much more.

“It felt like last couple of races have been quite close that [Mercedes] are winning, good thing for us as a team Lewis won, good points, but for myself, yeah… try again in two weeks.”

When asked how he’d pick himself up from the disappointment, Bottas replied: “Maybe 10 pints of beer and we will be fine!

"I will get through it – of course you always need to get through difficulties, it is part of racing although at the moment it is very painful.”

Mercedes team boss Toto Wolff said the manner of Bottas’s exit was “brutal” after he’d controlled the final restart from the front.

“I think it must feel terrible because he pulled away, that was for me amazing to see, to lose the race three laps to the end because of debris on track is just brutal,” he said.

Perez's podium in doubt amid investigation