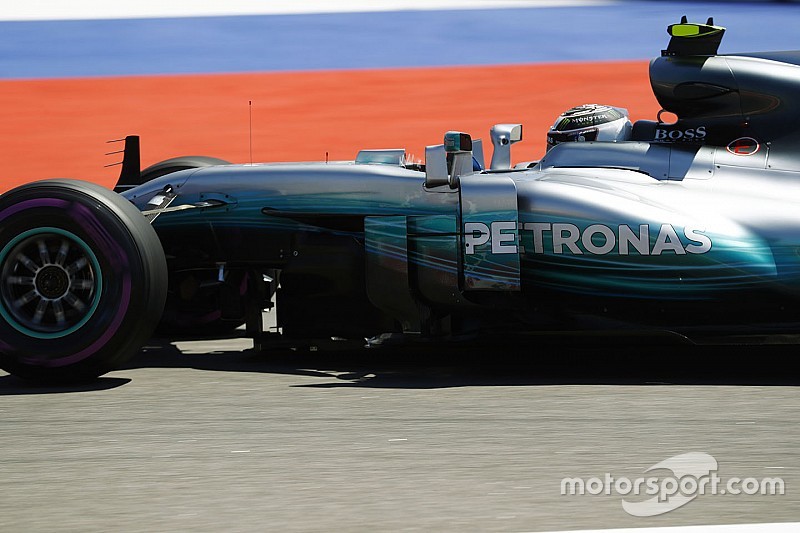 Mercedes driver Valtteri Bottas admits the German manufacturer expected to be stronger heading into the Russian Grand Prix weekend, after Ferrari relegated the Silver Arrows to the second row in qualifying.

Having swept every single Russian GP so far since the event's introduction in 2014, Mercedes was again considered favourite heading into the Sochi weekend this time around.

Yet Ferrari was quickest in all three practice sessions, and while Bottas looked in with a chance of preserving Mercedes' record at the track, he eventually came up a tenth short in the shoot-out, finishing third behind Sebastian Vettel and Kimi Raikkonen.

Asked in the post-session press conference whether losing out to Ferrari in qualifying was a surprise, Bottas said: "Definitely yes - me personally, and as a team.

"Coming into this weekend probably we were thinking it would be better than Bahrain - but so far it's turned out not to be so good.

"Ferrari appears to be doing something different. For us, disappointing not to be on pole - we did a good improvement from yesterday to today but not enough.

"Tomorrow will be a different story, difficult to predict, but it will be close."

Bottas said he wasn't sure the deficit to Ferrari was down to Mercedes struggling to get the tyres working optimally or simply down to the Italian marque having the better car.

"I think before the qualifying the only problems we had was extracting most out of the ultrasoft tyres," he said. "We made it better but I don't know if it is the tyres or the car. For sure, they [Ferrari] have a very good car but we are struggling to compete with them."

Mercedes had taken pole for all three grands prix of 2017 so far, but lost out to Ferrari in two of the races, the Scuderia's car being more competitive in race trim.

But despite qualifying behind the Italian team's drivers, Bottas believes Mercedes can still put on a fight on Sunday.

"I think the changes and the improvements we made from yesterday and today they should help us," he added.

"Obviously we are not confident that we have the quickest car around here. But as we have seen the first three races, we have good race pace and I think it will be same case tomorrow."

Hamilton expects “a real race” with Ferrari at Sochi