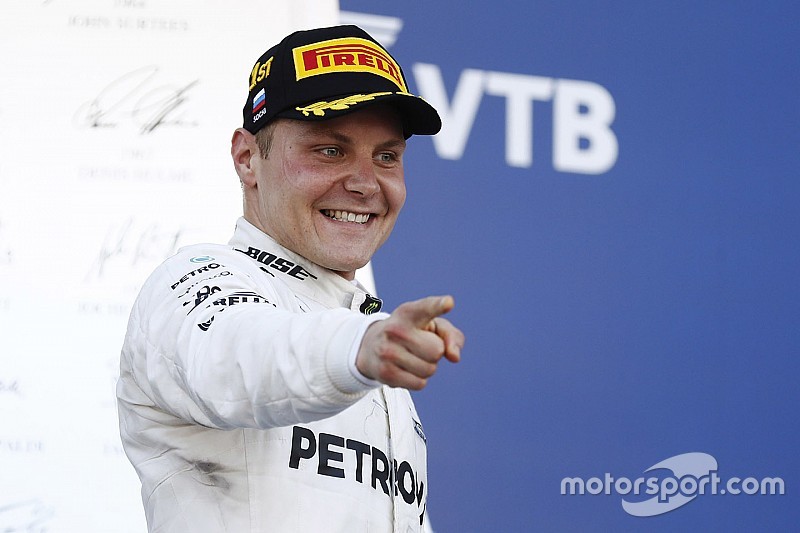 Valtteri Bottas has described his first Formula 1 victory as "surreal" after winning the Russian Grand Prix.

The 27-year-old took his maiden victory on his 81st start after holding off Ferrari driver Sebastian Vettel in a tense finish.

Bottas, who had taken 11 previous podium finishes without a win, described the performance of one of his best races.

"I felt good, but it's a little bit surreal the first win and hopefully the first of many," said Bottas. "It was definitely one of my best races ever, so it's a good feeling and I am happy."

Bottas admitted that the lock-up he suffered during the second stint at Turn 13, briefly running off the track, hurt is pace in the closing stages as Vettel cut his advantage.

But despite the extreme pressure in the closing stages and the need to lap backmarkers, he insists the pressure was not too bad.

"It was OK, the main thing was the lapped cars, trying to get past those," said Bottas when asked about the pressure.

"With these new cars, we lose more downforce when two seconds, three seconds behind, so it was tricky to get close and pass them without losing time.

"I was not happy on a few occasions and I had one lock-up with 10-15 laps to go, which hurt the pace a bit, but other than that it was OK.

"I did ask for radio silence from the pitwall for me to get on it and get focused."

Bottas believes he will get a boost in confidence from confirming he has the ability to win grands prix.

"I always knew I could get good results if everything goes right and I always trust in my ability," said Bottas. "But it's nice to get confirmation that the results are possible. It's good to continue from here."

Bottas, who made his F1 debut with Williams in 2013 and spent four seasons racing for the team, says that the long wait to become a winner after his "strange" deal to move to Mercedes following Nico Rosberg's retirement was worth it.

"It took quite a while, more than 80 races for me, but it's definitely worth the wait," said Bottas. "This strange opportunity came to me in the winter to join the team and they made it possible, so I want to thank them."