Less than three months after the end of last season, Formula 1 will return to the track tomorrow with the start of winter testing in Bahrain.

As to be expected following a season like no other in 2020, the break before the 2021 campaign also had many unique elements. Drivers had their preparations impacted by growing travel restrictions around the world, while three - Lando Norris, Charles Leclerc and Pierre Gasly - also had to battle off a bout of COVID-19 after spending time in Dubai.

Teams were also left considering how best to approach launch season and unveil their 'new' cars - which are running a majority of parts last year's models - in a COVID world for the first time.

After all, last year's launch season took place in a climate when the biggest fears F1 faced seemed to be the loss of China and Vietnam from the calendar.

2021 never seemed like the year in which teams would try and jazz up their launches again, harking back to the days when tobacco money ran freely and events were exuberant. All 10 teams approached their launches in slightly different fashion. Some kept it simple. Others went jazzy. Perhaps too jazzy. But it has all helped to amp things up ahead of the new season and given us plenty to talk and write about over the last month on so.

McLaren looked to begin launch season on a high note quite literally, when the unveiling of its MCL35M car for 2021 took a musical turn. New arrival Daniel Ricciardo and teammate Lando Norris were tasked with creating a new McLaren anthem for the coming season, giving them free rein to sample a number of instruments at a studio in London and even, to quote Norris, put their "zero talent" to good use. "I learned that I suck at singing," Norris said. "I think we knew that already, but we learned quite quickly we both suck really." 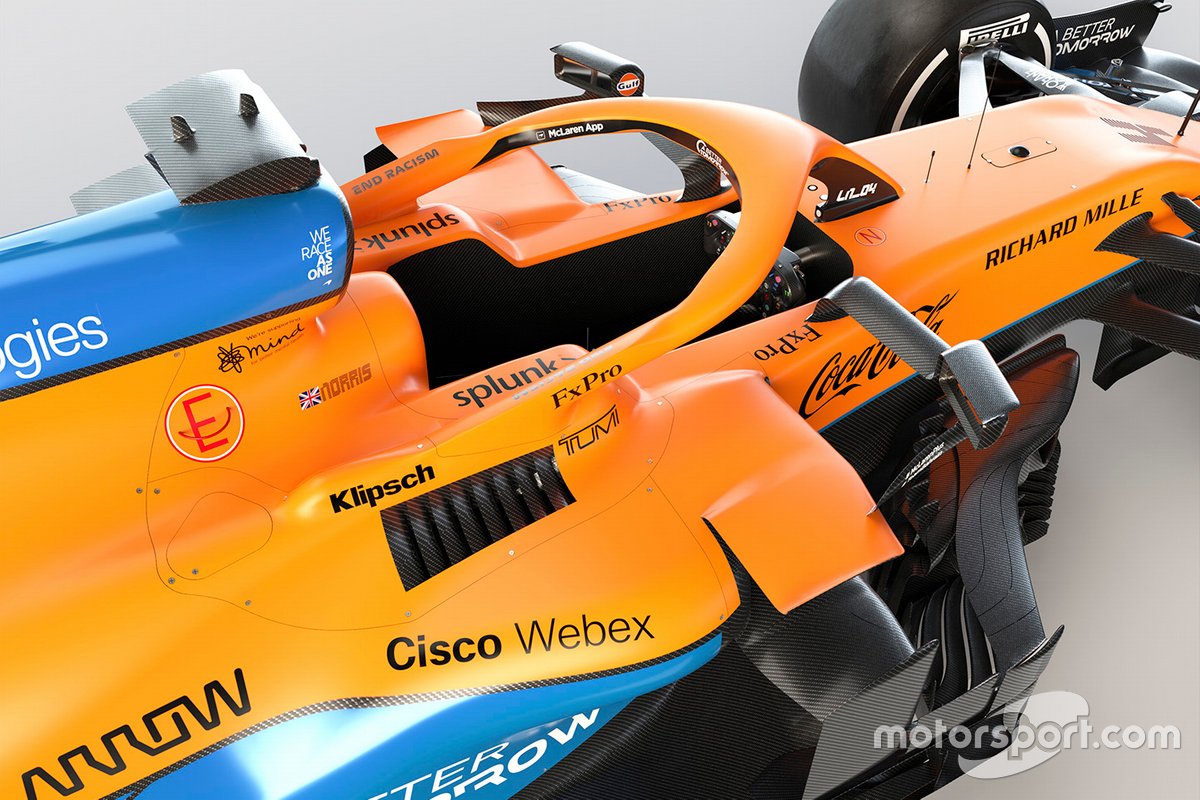 Second to go was Alfa Romeo, who delivered perhaps the most high-brow launch of all teams with a classy event at the Grand Theatre in Warsaw to honour title sponsor PKN Orlen. Prior to the presentation of the car, a pair of ballet dancers took to the stage dressed in the colours of the Polish flag, performing to two accompanying grand pianos. It was impressive and certainly brought a cultured feel to the launch, but it was hard to miss the fans in the live chat on YouTube writing "GET TO THE CAR" (among other more expletive messages…).

The staging of such events was rare through this pre-season though, as many of the teams opted to keep things low key. Haas simply issued a press release revealing its new livery and title sponsor for this year. Mercedes stuck to its traditional plan of posting initial renders, then holding a live stream event before arranging some media sessions. AlphaTauri also sorted a simple unveiling, with perhaps the most impressive part of its digital output coming with a literal flying lap in a helicopter above the car at Imola.

By keeping things simple and low key, teams avoided one of the big issues of this launch season: leaks. Of the 10 teams, four faced at least part of their car's design becoming public before the event. The tweaks to Alfa Romeo's livery were shown the day before after being tweeted by someone from its title sponsor during the launch set-up, but the other three - Aston Martin, Ferrari and Williams - had their designs discovered by fans in the lead-up to the launch.

It's perhaps to be expected at a time when F1 fans are eager for information and pictures as soon as possible, and interact on forums such as Reddit in reaction to news. Both Aston Martin and Ferrari had everything set up to go on their websites, only for some fans to find a way to access content - in Ferrari's case, by setting your computer clock forward to after the launch - and leak the pictures out.

Williams was perhaps the worst leak, though. The team had announced it would be launching its car through a bespoke augmented reality app, giving fans the chance to see the FW43B for the very first time literally in their own homes. But again, a workaround was found to access the full version of the app early, causing the livery to be leaked. The team said in a statement it had removed the app just before the launch after the hack, and said the breach had occurred "completely outside of Williams Racing's in-house systems and networks".

It is disappointing for the communications teams that have spent so much time and effort in planning a launch for their work to be undone on the big day. As hungry as we may be to get the latest news and information ASAP, when it comes to an event as sizeable as a car unveiling, that right really belongs to the teams themselves.

While some teams fought the issue of their cars being seen too soon, others did well to ensure they were not seen at all. Red Bull kept things simple for the presentation of the RB16B, again just issuing a press release and a tweet with two render images. Max Verstappen and Sergio Perez were shown driving on-track, but through all of the images issued - 76 by our count - there was not one of the new car. Instead, they were all of the RB15, which was being used by the drivers as part of their pre-season preparation at Silverstone. 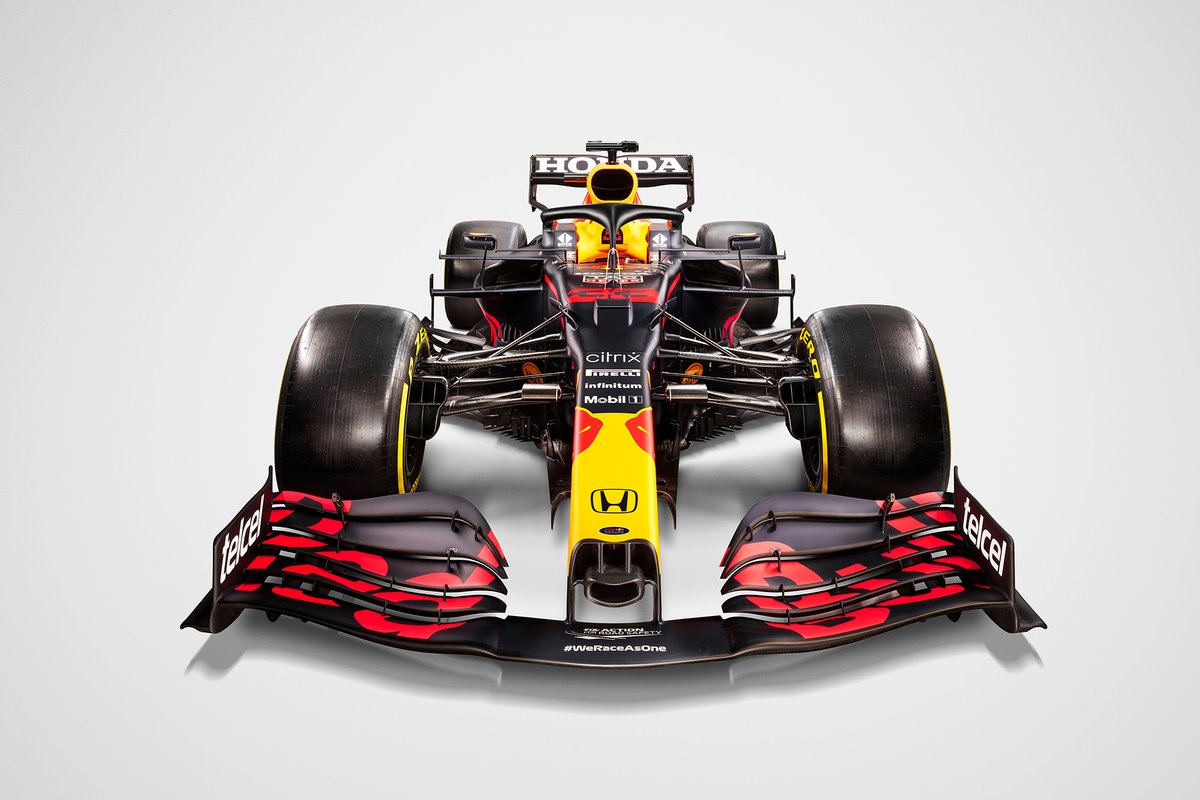 It has fuelled intrigue over what Red Bull could be hiding on its new car, especially with areas of the RB16B renders being deliberately darkened. Another curious element of the mystery was the special shakedown merchandise sporting a neon blue design that was available on Red Bull's store just before the unveiling, pointing towards a special shakedown livery for the new car, a frequent tactic used by Red Bull in recent years. If the livery was used, we wouldn't know. We'll only find out what the team is hiding on Friday when the car gets on-track for the first time.

The two most extravagant and perhaps most anticipated launches for 2021 came from the new names on the grid: Alpine and Aston Martin.

Alpine opted for a quirky launch - minus Fernando Alonso - that saw its key figures speak in front of green screens before being added to a virtual launch around the new car, resembling a character selection screen from a video game. The event played heavily on Alpine's history, making clear that while this is a new name for F1, it has a deep heritage within motorsport. The car livery itself has won plaudits as being one of the best designs on the grid, and it was pleasing to see Esteban Ocon take such a leading role despite the natural hubbub around his two-time world champion teammate.

But the winner of launch season was Aston Martin. Ahead of its comeback after 61 years away, it had to go big - and did it do exactly that with an event that brought some pizazz back to F1 launches.

James Bond has always been a core part of Aston Martin's identity, and Lawrence Stroll has no plans to change that. The launch saw Stroll himself plug the upcoming film, No Time to Die, before introducing Bond himself, Daniel Craig, to offer a congratulations message ahead of the new season.

"I just want to send a massive congratulations to all of Aston Martin for getting back onto the F1 grid for the first time since 1960," Craig said. "It is an incredible thrill for me, and I'm sure all F1 fans, to see Aston Martin racing again in their iconic British racing green."

The whole event was also MC'd by Gemma Arterton, who was the Bond girl in the otherwise-forgettable Quantum of Solace movie. She jokingly asked Vettel and Stroll which of them was Bond and who was Q, with the status of quartermaster fittingly being given to technical director Andrew Green.

Craig and Arterton weren't the only big names involved in the launch. Rapper Santan Dave was a big part of the initial unveil, voicing over the introduction video. The team even enlisted NFL superstar Tom Brady, who is less than a month into his off-season after winning a record seventh Super Bowl, to offer a message of support as part of his role as an Aston Martin ambassador.

It all showed the kind of punch that Aston Martin is looking to race with now in F1. To enlist proper star power for the launch may mean nothing for its on-track fortunes, but it proved again how Stroll and co. are keen to make a splash in F1. In an era where F1 launches have traditionally become low key affairs, it was great to see such a stylish and entertaining event.

But the true battle will begin on track tomorrow as teams put their new cars through their paces and gauge the quality of the competition - and all of the launch season shenanigans will soon become a distant memory. 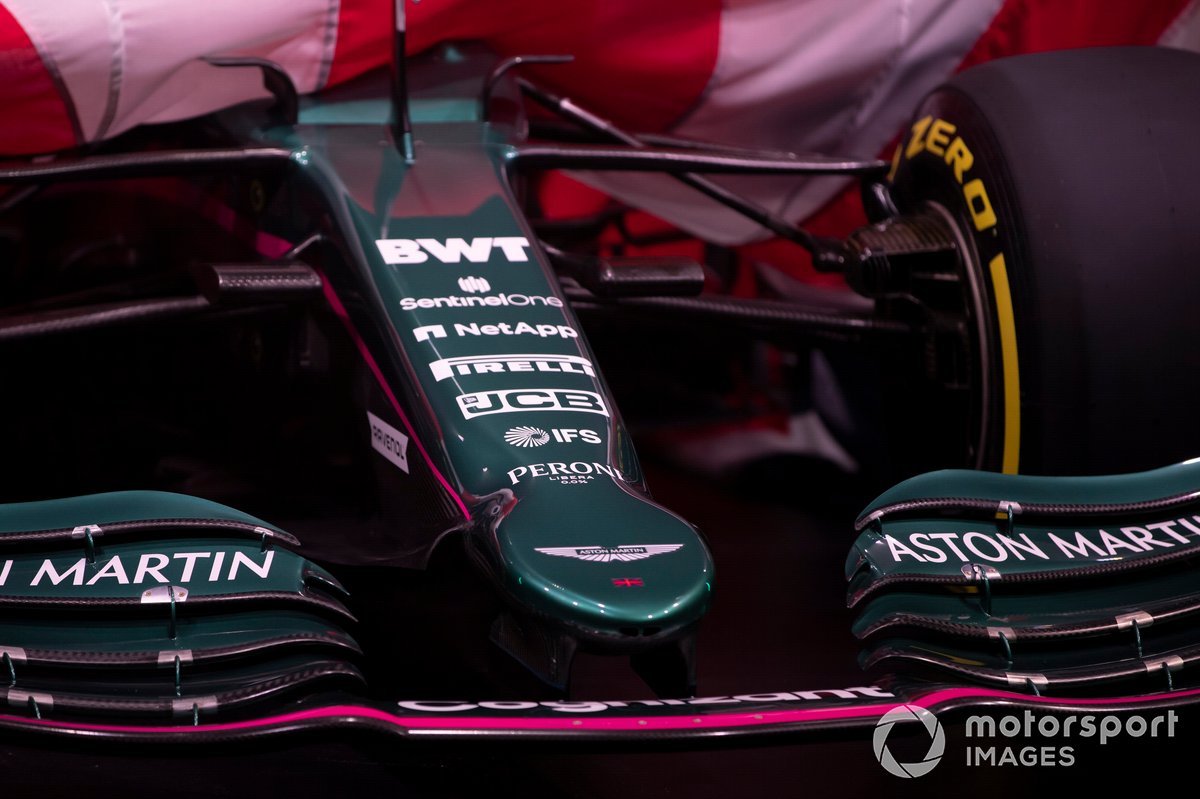 Nose of the Aston Martin AMR21

F1 testing 2021: Schedule and who's driving in the Bahrain test