The 2021 Saudi Arabian Grand Prix was one of the most dramatic races in recent Formula 1 history. The Motorsport Images team was there to capture all of the action.

F1's inaugural visit to the Jeddah Corniche street circuit resulted in a controversial and eventful race that was twice red-flagged as the 2021 title race bubbled to boiling point.

Championship rivals Max Verstappen and Lewis Hamilton went toe-to-toe and made contact on-track before Hamilton won out, the Mercedes driver levelling the scores in the drivers' world championship standings on 369.5 points apiece with one race to go in Abu Dhabi next weekend.

These are some of the best photos taken across the weekend.

1. Max Verstappen's car sparks as he runs over a kerb in practice, the Red Bull driver finding the limits of the high-speed circuit. 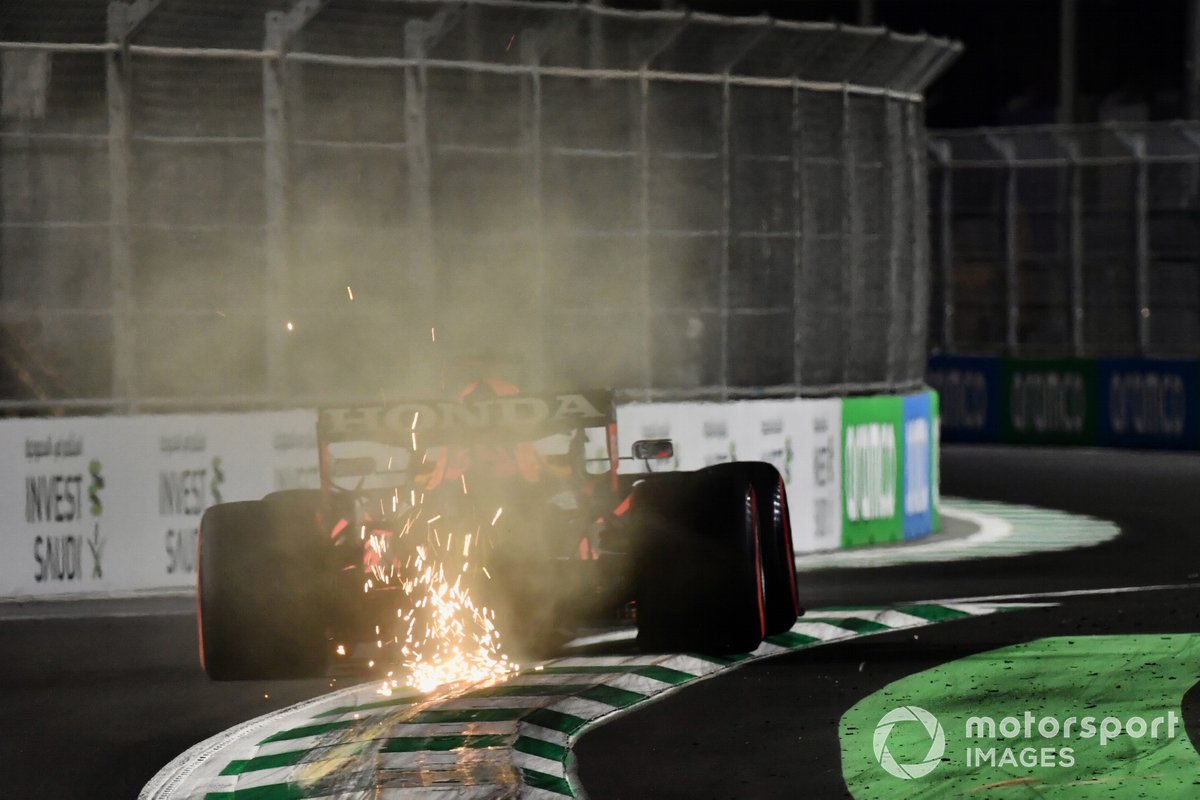 2. Charles Leclerc jumps from his crashed Ferrari in Friday's second practice session. He escaped without injury, though his car suffered severe damage that required an extensive overnight repair. 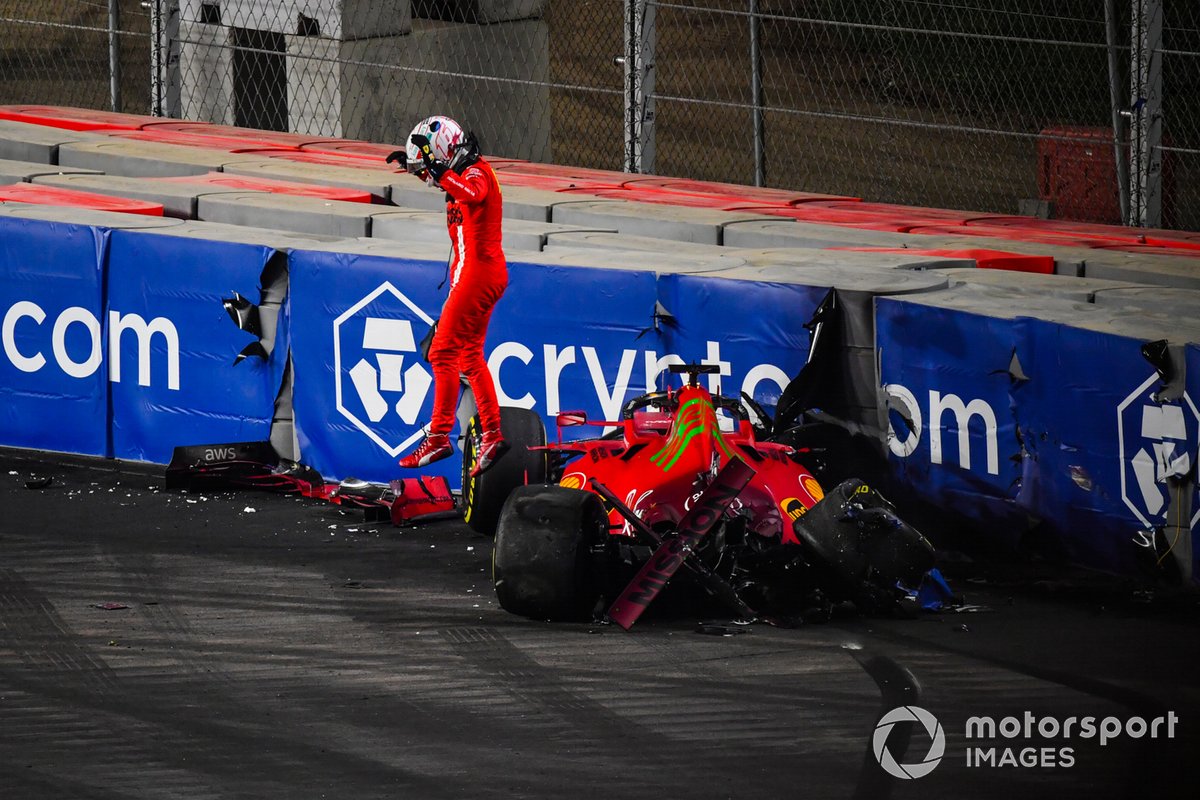 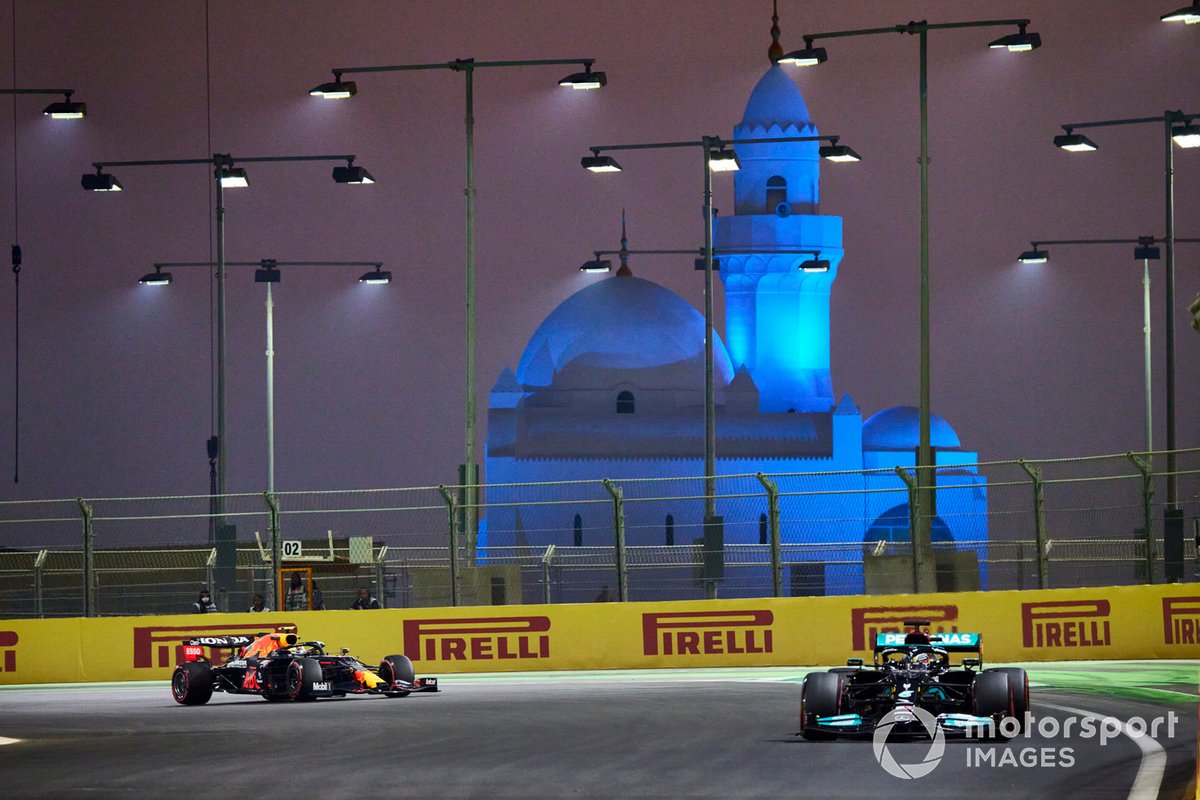 4. A view of the Jeddah circuit from the air, the circuit lit up before qualifying. 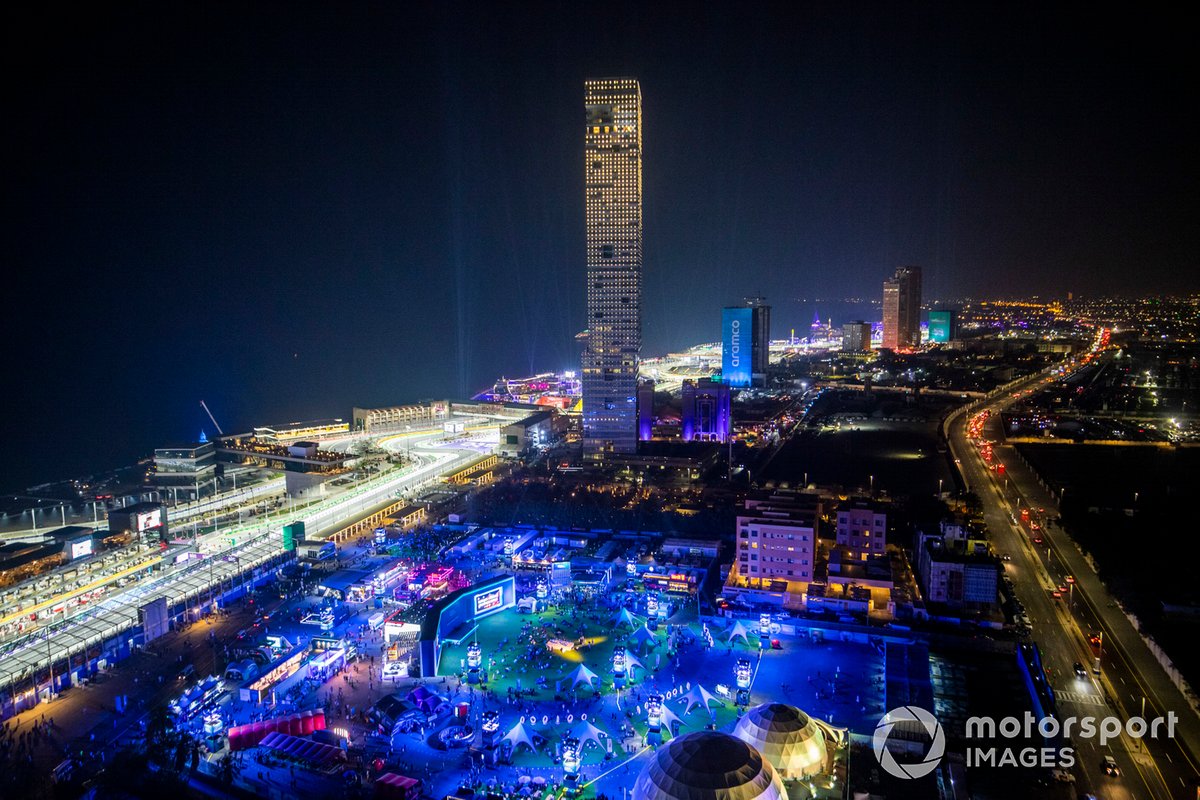 An aerial view of the circuit and city at night

5. Verstappen reflects on his crash in the final corner of qualifying while on a lap that would have given him pole position. It was a potentially decisive moment in the 2021 world championship that instead left him third for the race start. 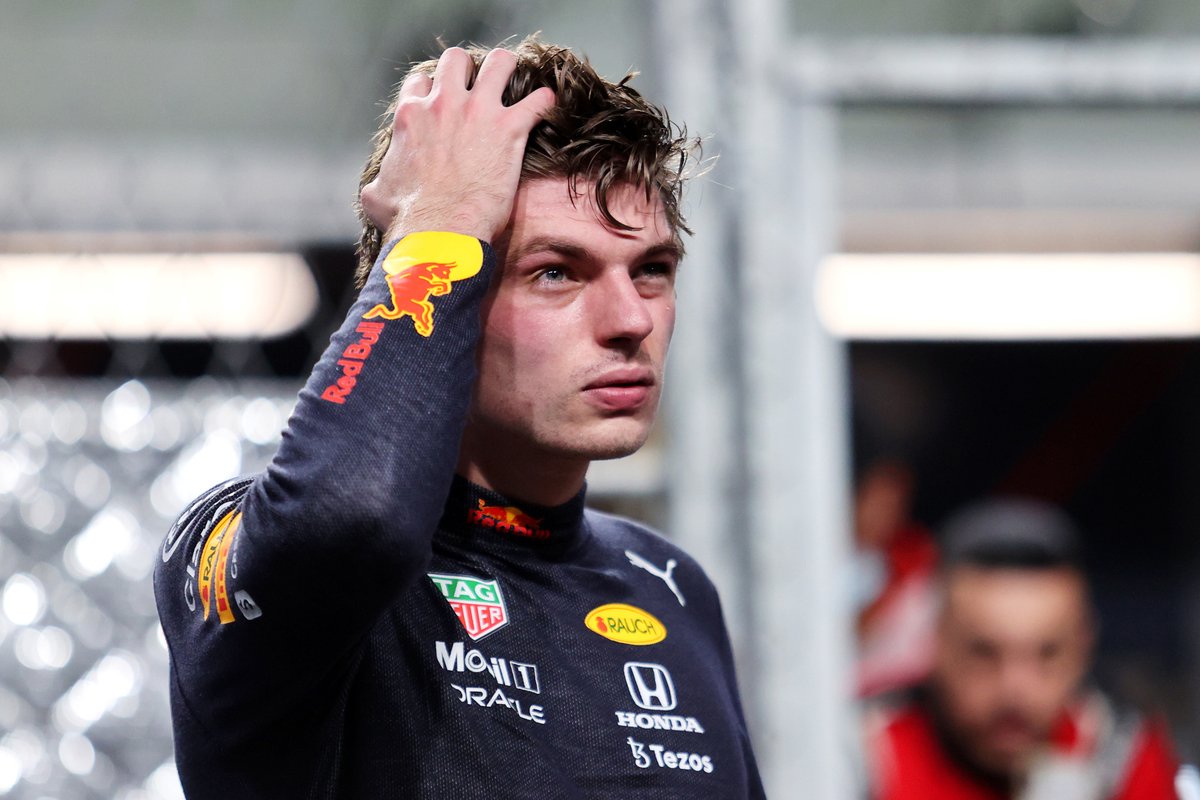 6. Hamilton leads the pack away from the grid for the first race start of the 2021 Saudi Arabian Grand Prix as team-mate Valtteri Bottas tucks in behind to protect the inside line. 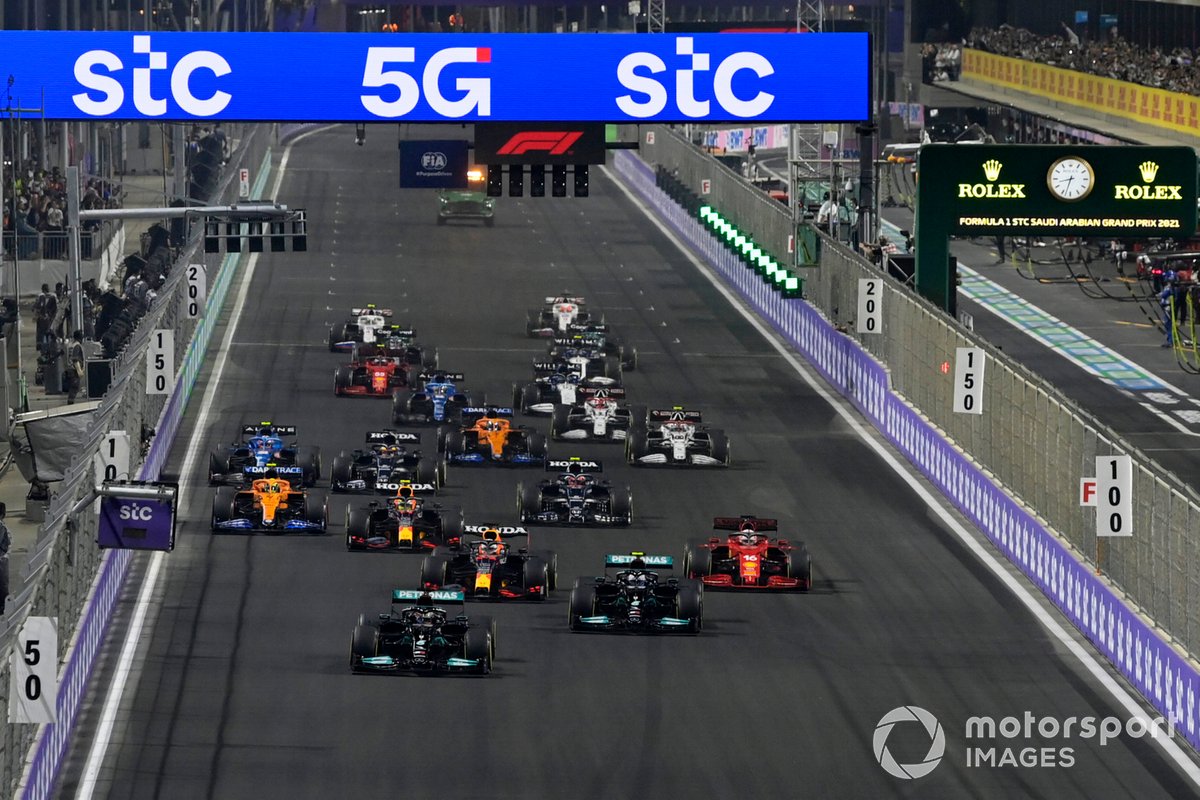 7. Marshals work on removing the stricken Haas of Mick Schumacher, following his crash early in the race. It would cause the first of two red flags in an eventful grand prix. 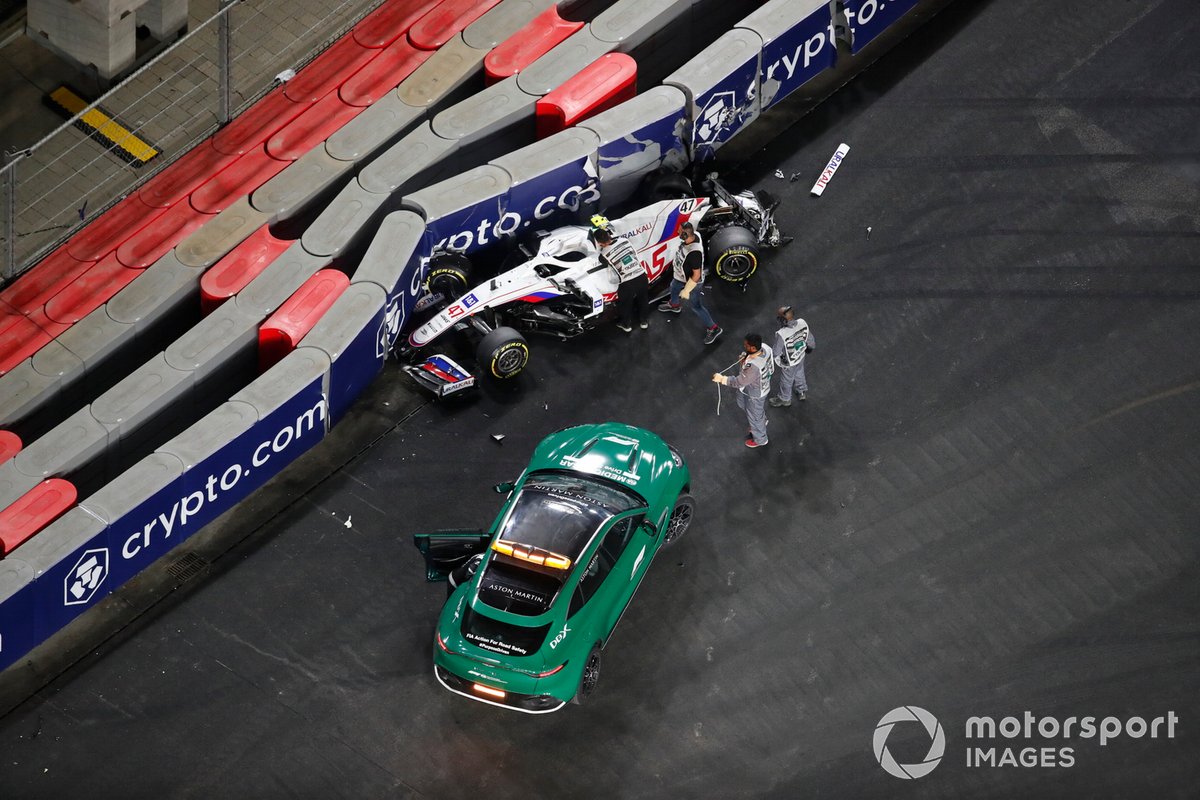 8. Verstappen runs off track on the first restart while attempting to pass Hamilton. The race was red flagged shortly afterwards, and Verstappen was forced to start third behind his Mercedes rival and the opportunistic Esteban Ocon, who had sneaked past Hamilton when Verstappen came back onto the circuit. 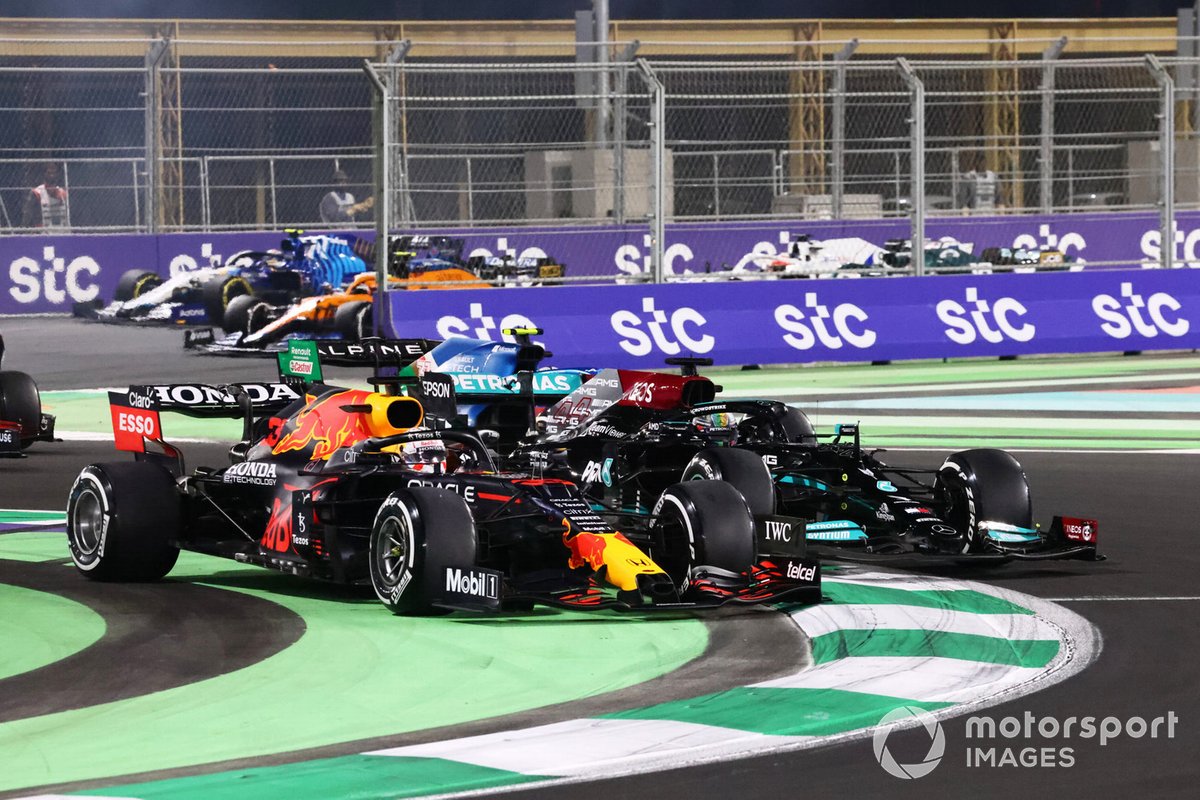 9. The medical car attends the stricken machines of Perez and Nikita Mazepin. The incident, caused when Perez and Charles Leclerc tangled at Turn 3, also resulted in George Russell's retirement and caused the second red flag of the race. 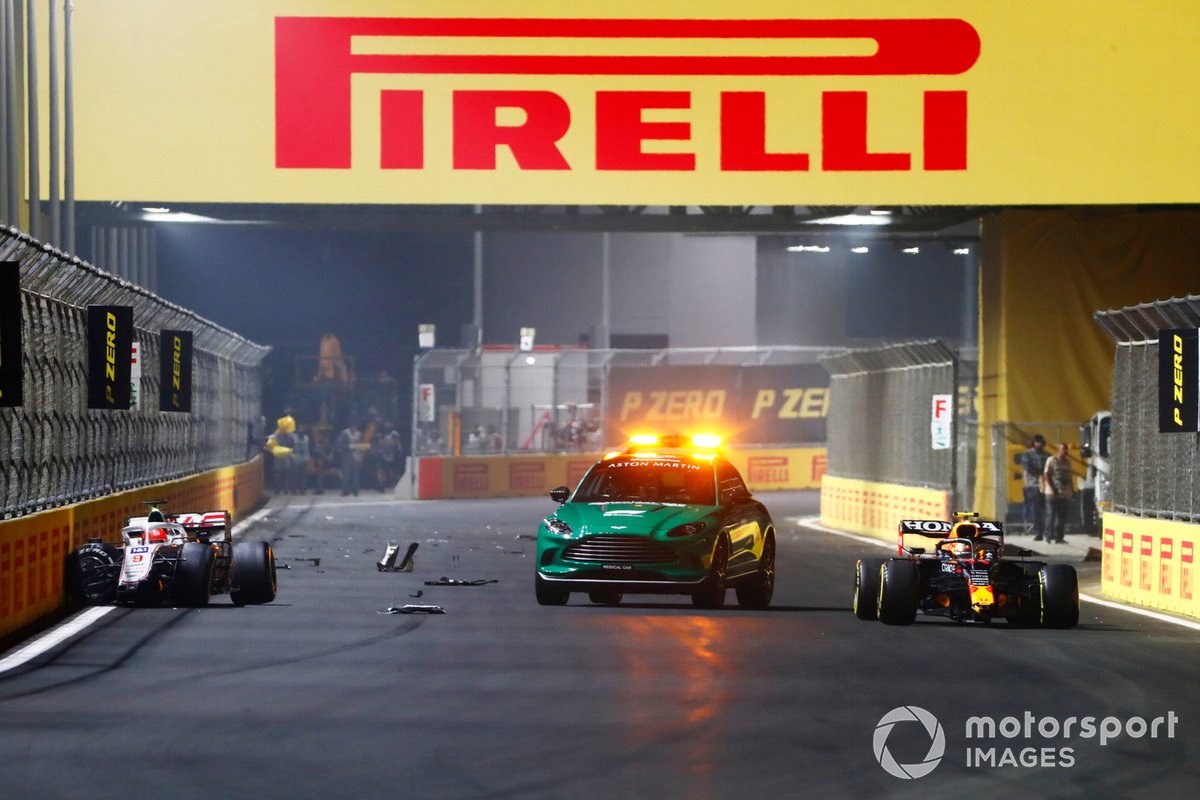 10. Verstappen overtakes Hamilton and Ocon on the third race start, following the second red flag. His bold move put him into the lead and left Hamilton with front wing damage as the Mercedes knocked into Ocon's Alpine. 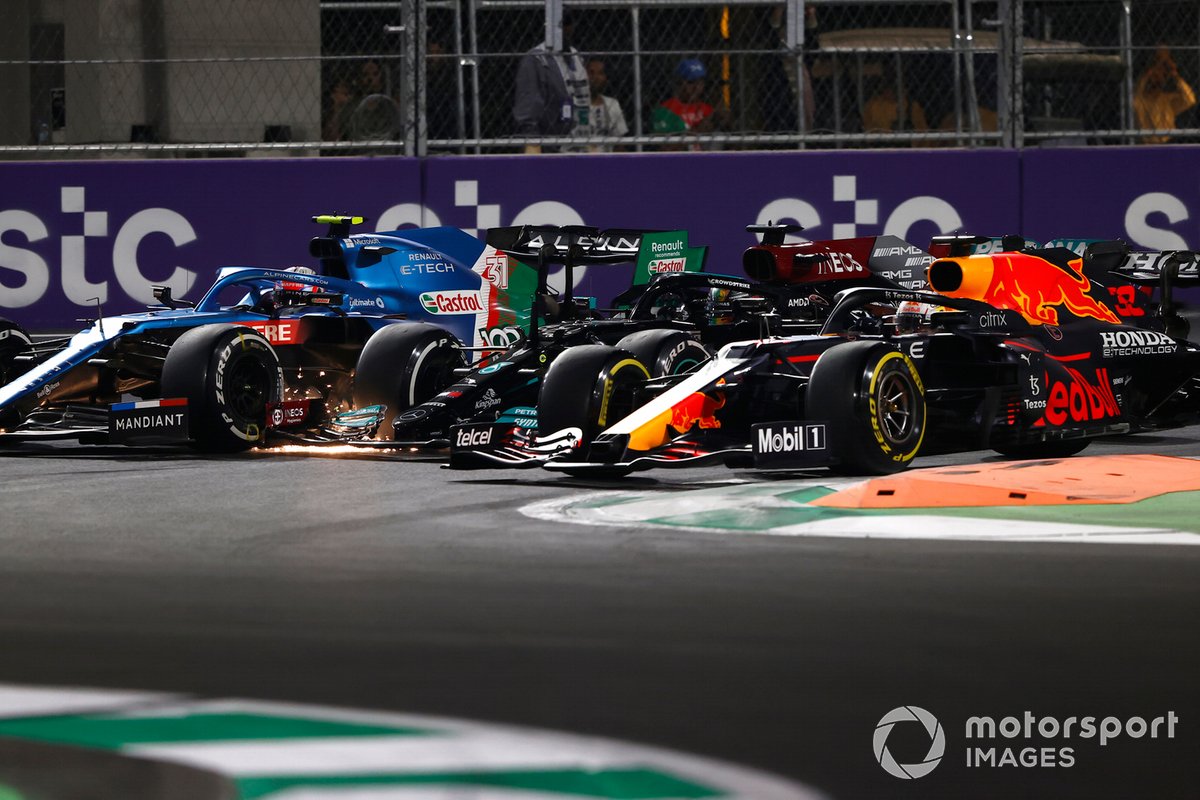 11. Another view of Verstappen's double overtake at the third race start, which prompted Ocon to go into the run-off. Ocon went on to finish fourth, losing out to Bottas on the last lap. 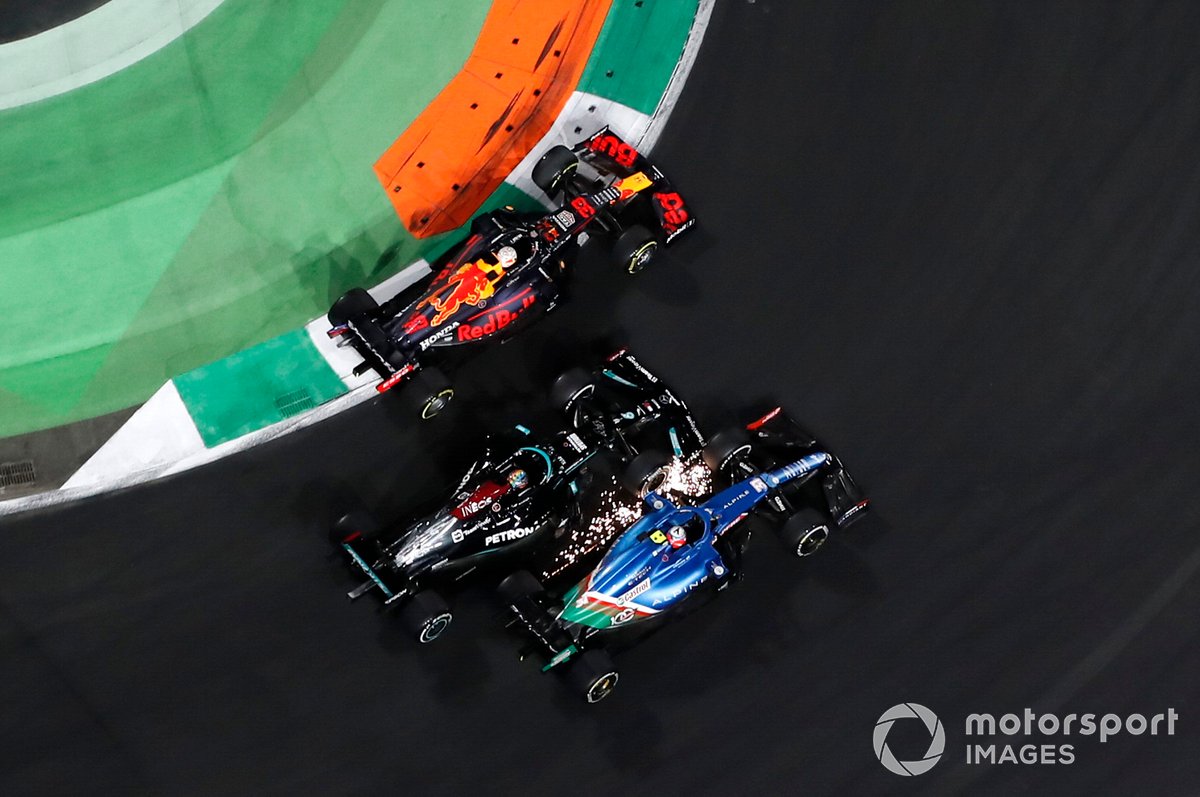 12. Hamilton and Verstappen head for the Turn 1 run-off area as they fight for the lead of the 2021 Saudi Arabian Grand Prix. Hamilton had pulled ahead using DRS on the main straight on the approach to the corner, before Verstappen lunged down the inside, taking both wide. He later earned a five-second penalty for gaining a lasting advantage by driving off the track. 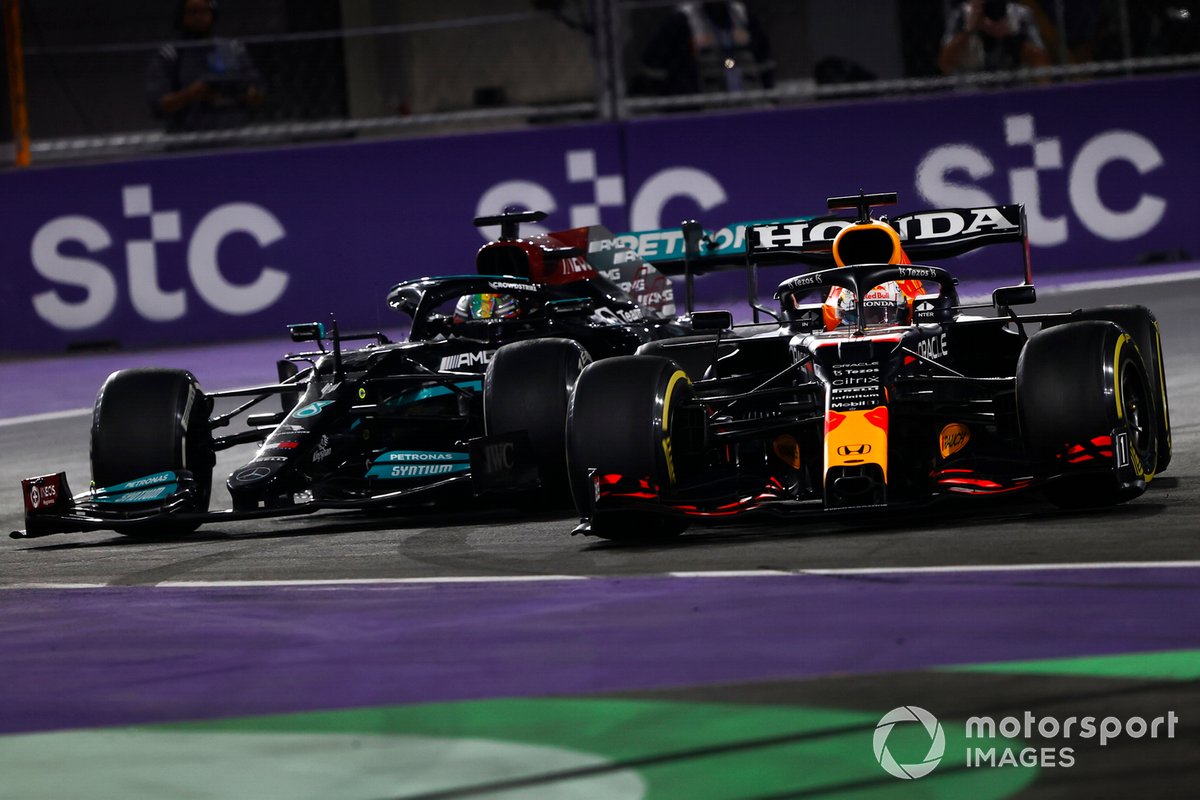 13. Half a lap later, at the request of his Red Bull engineer, Verstappen attempts to give the place back to Hamilton "strategically". He slows on the approach to the final corner, Turn 27, then hits the brakes with 69 bar of pressure, causing Hamilton to run into the back of him. The Dutchman would later pick up a ten-second penalty after the incident was investigated by the stewards, but it didn't cost him a position to Bottas. 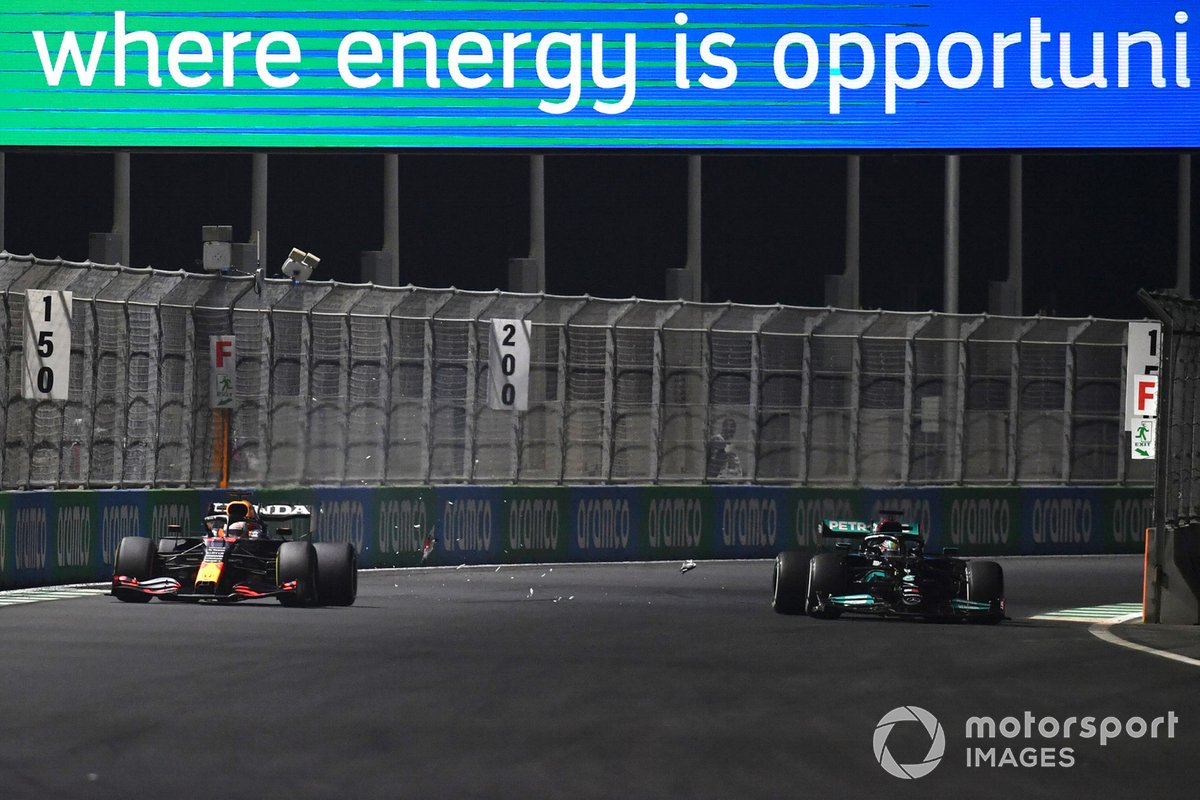 14. The front wing damage is clearly visible on Hamilton's Mercedes as Verstappen ducks up his inside through the final corner. He decided to let the Briton through on the approach to the DRS detection zone, before darting back through. 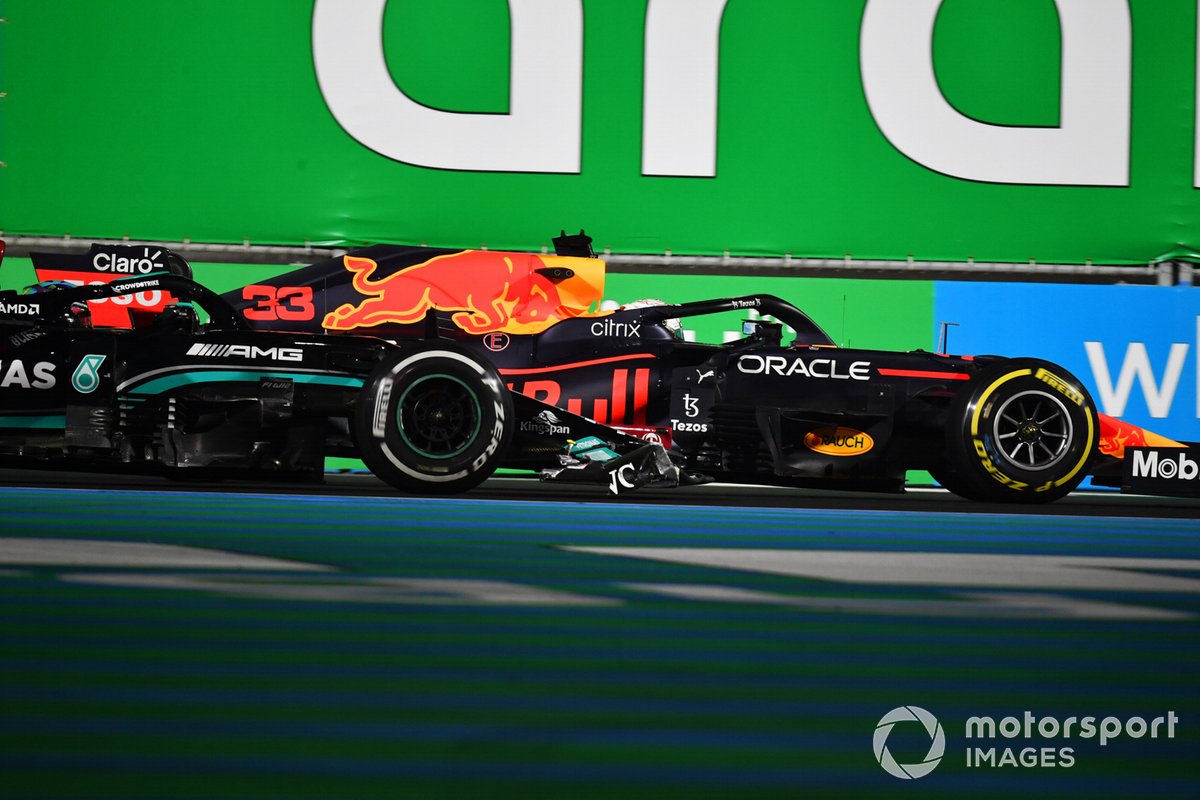 15. Verstappen finally relinquishes the race lead to Hamilton as the pair run into the last corner of lap 43 of 50, the Red Bull's medium tyres now well past their best. 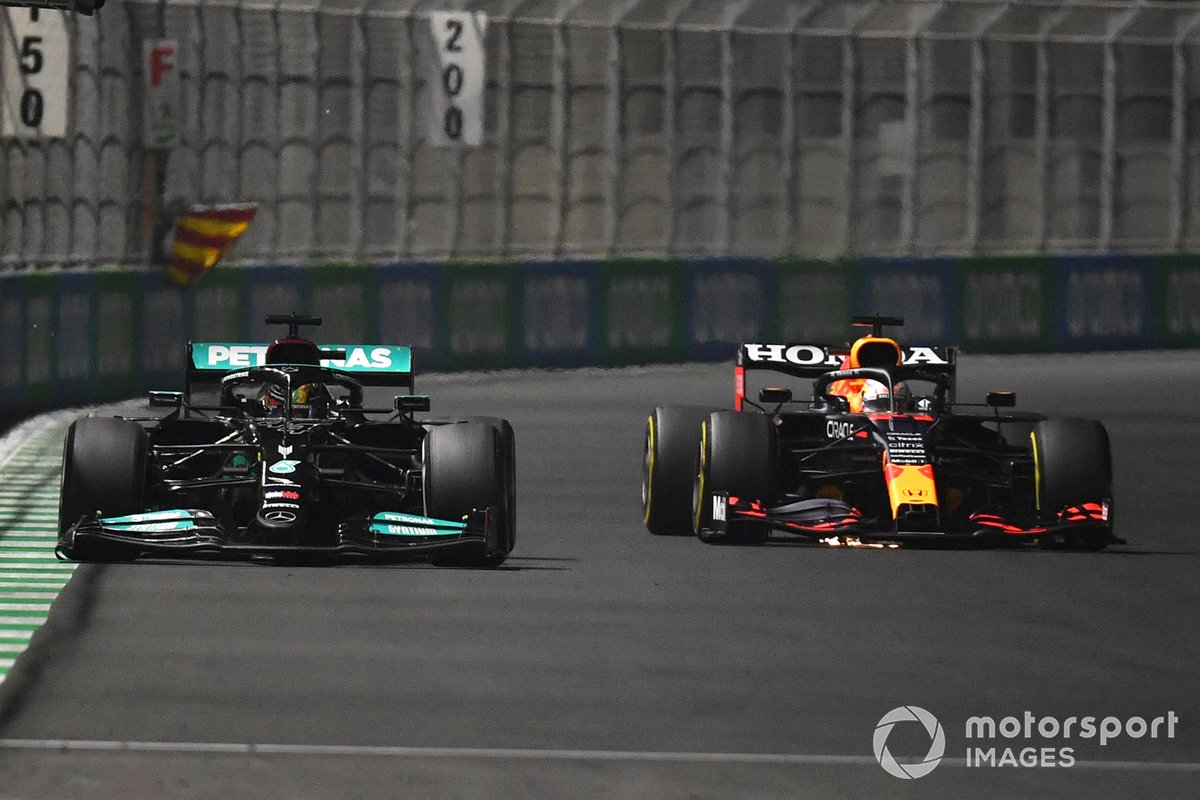 16. Hamilton celebrates atop his car in parc ferme, his eighth victory of the season drawing him level with Verstappen with one race remaining in the season. 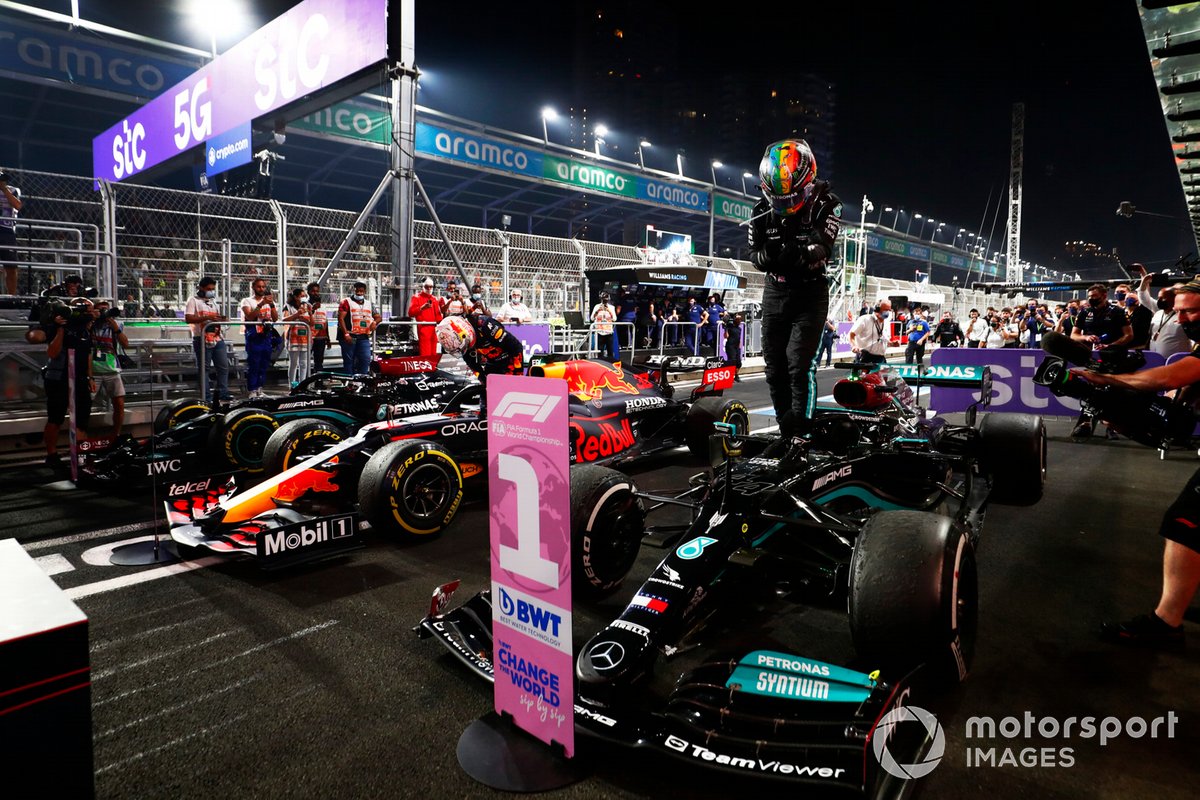 17. The atmosphere on the podium is tense as Hamilton stands on the top step and waves to the crowd, while second-placed rival Verstappen looks at the floor. 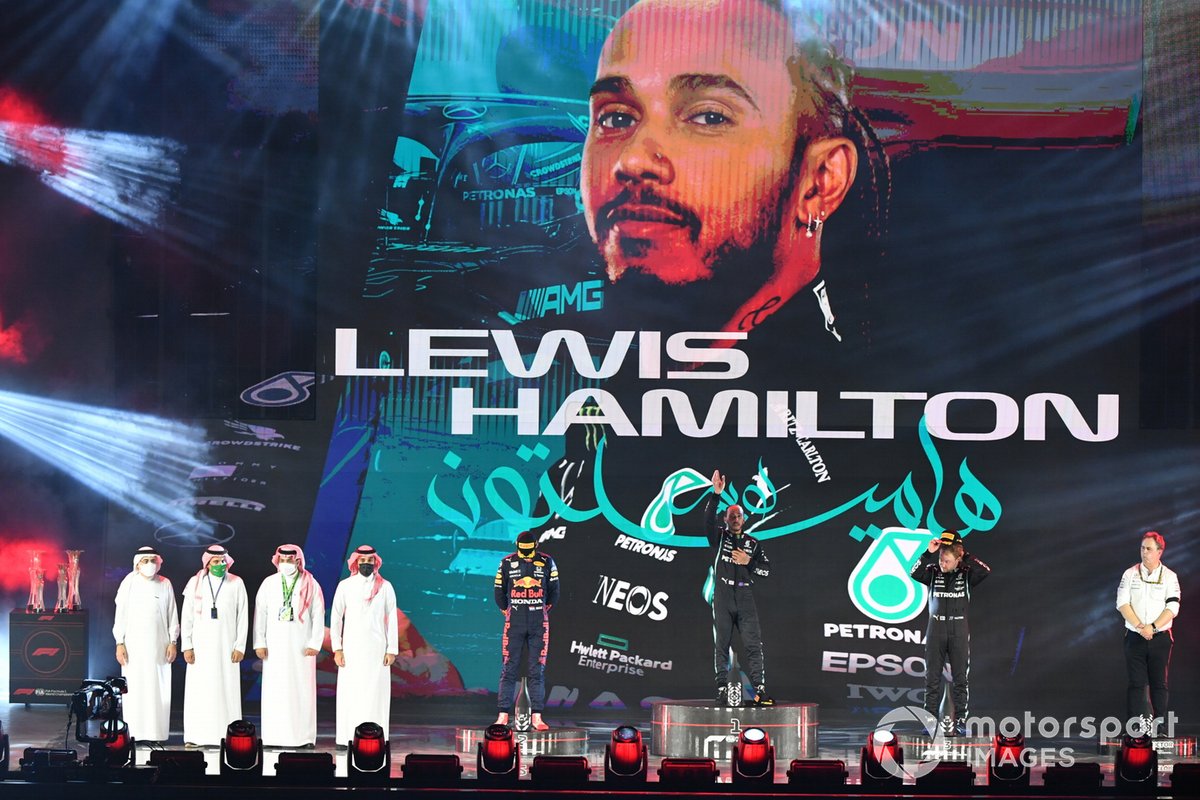 This article was created in partnership with Motorsport Images.

Motorsport Images is a photographic agency and archive covering motorsport and motoring. It is unique in that it provides photography of all major current motorsport events, from Formula 1 Grand Prix racing to national level racing, as well as archive images documenting the history of the sport dating back to 1895.