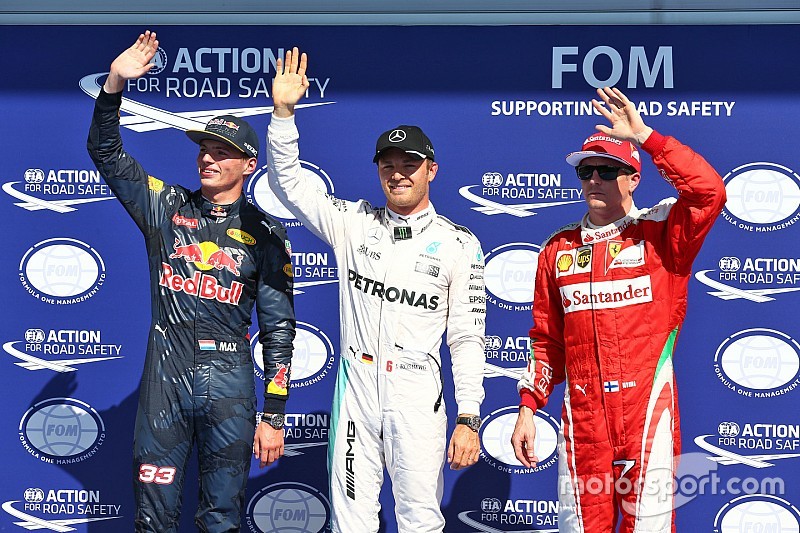 Nico Rosberg will start the Belgian Grand Prix from pole position after seeing off the challenge of Red Bull’s Max Verstappen in Q3 at Spa-Francorchamps.

In what was perhaps the most routine pole of the 28 he's scored in his career, without teammate Lewis Hamilton to deal with, Rosberg lapped the iconic Ardennes forest venue in 1m46.744s.

Hamilton cruised on his Q1 lap to stay within the 107 percent time, as he will start on the back row of the grid alongside McLaren's Fernando Alonso – who suffered another failure in qualifying, and said he could "beat" Hamilton on the number of penalties.

Verstappen was only 0.149s behind Rosberg's best time, and becomes the youngest front row starter in Formula 1 history.

Vettel was third, over 0.5s off the pace, after the opening runs.

Verstappen didn't improve on his second run, so Rosberg didn't need to either, but Max becomes the youngest driver to qualify on the front row for an F1 race.

His teammate Ricciardo's first lap was over a second off the pace, but he jumped up to third on his final go, a 1m47.216s.

Raikkonen went off at Stavelot on his first flying lap, so had to rely on his final effort. Raikkonen then snatched third with 1m46.910s in the closing seconds, two tenths ahead of Vettel who took fourth ahead of Ricciardo.

Sergio Perez beat Nico Hulkenberg to sixth in the battle of the Force Indias, with Valtteri Bottas qualifying eighth for Williams, ahead of McLaren's Jenson Button and the second Williams of Felipe Massa.

Ricciardo cuts in close in Q2

Rosberg unleaded an early 1m46.999s on softs, shying away from using the supersoft that he would otherwise have been forced to start the race on. The Ferrari duo of Raikkonen (fifth) and Vettel (eighth) did likewise, and will also start on softs.

Ricciardo braved out the final few moments of the session in the pits, having only set the ninth-fastest time on softs at 1m48.027s. Button got to within 0.24s of him on supersofts, but reached Q3 for the third time in the last six races anyway.

Missing the cut, Haas's Romain Grosjean will start 11th, ahead of Renault's Kevin Magnussen, Esteban Gutierrez (Haas), Jolyon Palmer (Renault), Carlos Sainz (Toro Rosso) and Pascal Wehrlein (Manor) – but Gutierrez will drop back to 18th due to a grid penalty for his FP3 incident.

Verstappen used supersoft to go second fastest in this session on 1m47.163s, ahead of the similarly-shod Force Indias of Nico Hulkenberg and Sergio Perez.

Alonso and Hamilton out in Q1

McLaren's Alonso ground to a halt at Raidillon without setting a time, and with Hamilton completing a leisurely 1m50.033s – due to his 55 grid positions of penalties – this left the door wide open for both Renaults to progress.

Felipe Nasr and Magnussen had their first laps deleted after exceeding track limits at Raidillon, but Magnussen jumped up to 14th on his final effort, making it through with Palmer in 16th.

At the top of this session, Massa set the pace using supersofts in the closing seconds on 1m47.738s, ahead of Vettel's 1m47.802s, which was a tenth ahead of Raikkonen.

Rosberg was the fastest of the soft runners in fourth, lapping in 1m48.019s.