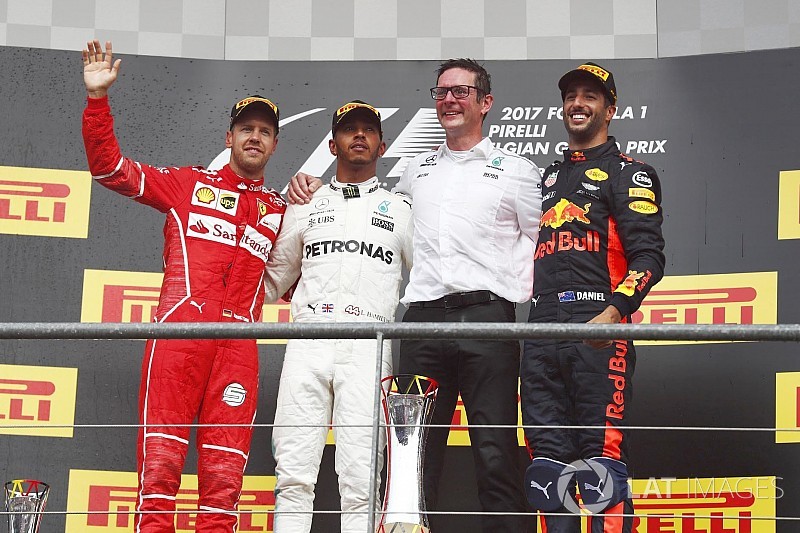 Lewis Hamilton defeated Formula 1 title rival Sebastian Vettel in the Belgian Grand Prix to close the gap in the championship to seven points.

The Mercedes driver managed a late safety car and a tyre disadvantage to fend off Vettel with relative ease, as Daniel Ricciardo claimed a surprise third for Red Bull.

Hamilton made a good start from pole position and built a 1.7s lead before stopping for new soft tyres on lap 12 of 44.

Vettel ran two laps longer in the opening stint and rejoined two seconds behind Hamilton, who cleared the second Ferrari of Kimi Raikkonen the lap before Vettel pitted.

A great first full flying lap for Vettel took 1.2s out of Hamilton's lead and thrust the Ferrari into DRS range, but Hamilton responded immediately.

He built his advantage up to two seconds, but a safety car changed the complexion of the race entirely.

Force India duo Esteban Ocon and Sergio Perez had clashed on the run to Eau Rouge on the opening lap, then came together in more dramatic fashion on lap 29.

Fighting over a net seventh, Ocon cut back on his teammate exiting La Source, only for Perez to edge across and break Ocon's front wing with his right-rear tyre.

That caused Perez's tyre to deflate entering Eau Rouge and the pair littered the track with debris.

The field swapped tyres under the caution, with Hamilton taking softs to Vettel's ultrasofts and then complaining over the radio as the safety car remained on track for three laps.

Vettel was tucked up underneath the Mercedes' rear wing through Eau Rouge and Raidillon at the restart and pulled alongside as Hamilton defended on the run to Les Combes.

Hamilton hung on, and found enough pace on the slower tyre to bump Vettel out of DRS range and gradually extend his lead until the end to win by 2.3s.

Ricciardo started the race sixth but made his way to the podium, at a track not suited to the Renault-powered Red Bull, with a blend of fortune and opportunism.

Max Verstappen suffered a mechanical problem early on and stopped at the side of the track exiting Eau Rouge.

Raikkonen failed to slow sufficiently under the yellow flags that were thrown while Verstappen's car was recovered and had to serve a 10-second stop-go penalty.

That meant Ricciardo ran fourth under the late safety car, and used a slipstream and ultrasoft tyres at the restart to nail Valtteri Bottas's soft-shod Mercedes into Les Combes.

Raikkonen dived inside Bottas at the same time to recover to fourth, as Bottas finished a muted fifth having run comfortably in third before the caution.

Nico Hulkenberg finished best of the rest for Renault with a quiet but excellent drive, while Grosjean and Felipe Massa took advantage of the messy race to claims seventh and eighth.

Ocon, who labelled Perez a "f****** idiot" over the radio, recovered to ninth as Perez eventually retired, while Carlos Sainz took the final point.

Fernando Alonso ran as high as seventh but gradually fell back down the order and eventually retired with an "engine problem" in his McLaren-Honda.