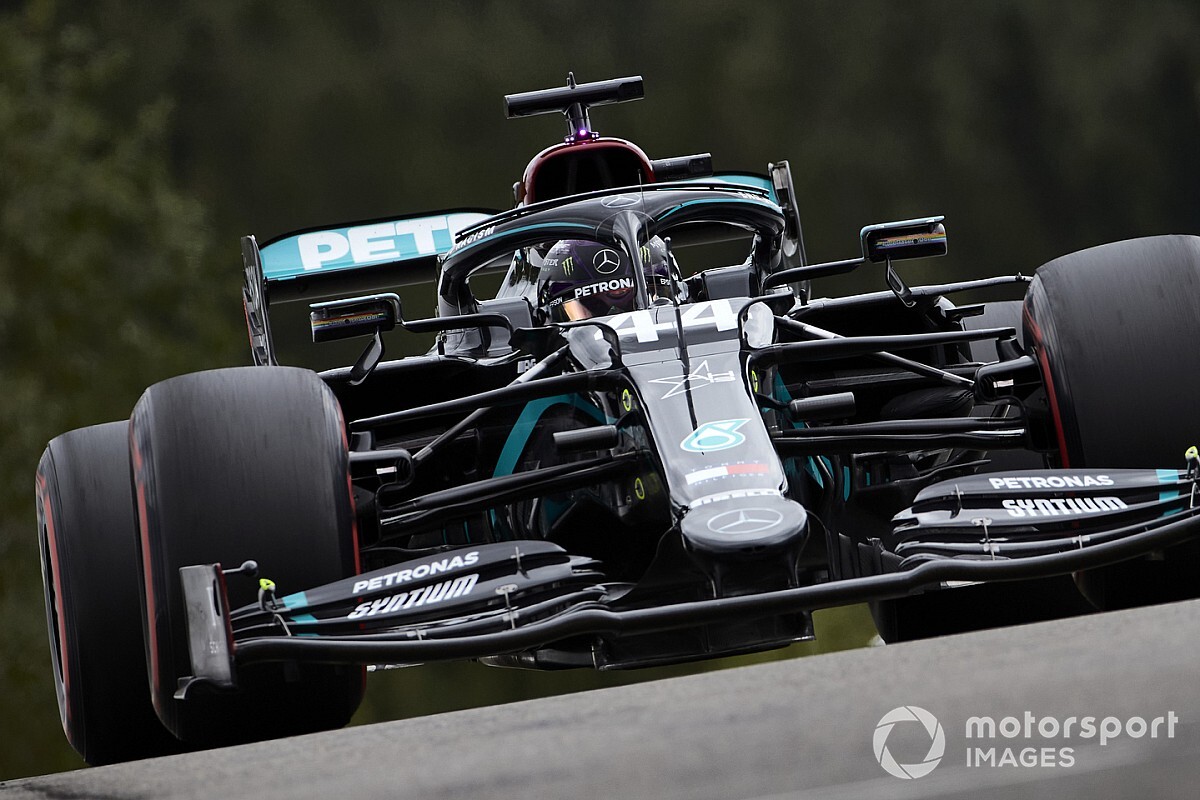 Much of the rubber laid down during the opening practice sessions was washed away during an intense thunder storm, which was so severed it caused the Porsche Supercup practice session to be red flagged on Friday evening.

That meant few cars took to the track in the early stages, with only the Haas cars circulating during the early stages – once several other runners had completed a solitary installation lap.

Kevin Magnussen and Romain Grosjean moved to the top spots straight away as a result, with the former ahead on a 1m 45.984s on the medium tyres, as they tried to make up for the lack of running they were able to complete on Friday thanks to their power unit changes.

But after 15 minutes they returned to the pitlane, leaving no cars on track for a long period as the rain continued to fall gently at various points around the long Spa lap.

McLaren's Lando Norris eventually led the pack onto the track after 20 minutes, with several runners – including the Mercedes duo and Verstappen – heading out on the soft rubber straight away.

Norris initially lowered the P1 benchmark on the mediums before he was moved down by Alex Albon's 1m45.092s – also on the yellow-walled rubber.

Hamilton then put in a 1m44.422, which was immediately supplanted by Bottas's 1m43.813s, which put the gap between the Mercedes drivers at 0.6s – although Hamilton was able to lower this to 0.3s with a second run on his first set of softs.

Verstappen slotted himself into the gap between Bottas and Hamilton before a long lull in action took place as spots of rain returned.

After a 15 minute delay with no cars on track, the pack headed back out with eight minutes of the one-hour session remaining – apart from Magnussen – all on the soft tyres, which only a minority had tried by that stage.

Ocon blasted to the session's best time in the first sector, which suggests Renault has opted to go for a lower downforce package to gain time in Spa's long acceleration zones, as he lowered the best time to a 1m43.485s.

Bottas and Verstappen did not set better times in the final flurry of action, with the former abandoning his lap after locking his right-front at La Source and then nearly losing the rear of his W11 as he slide wide on the exit kerb.

Verstappen was caught in the massive traffic jam at the Bus Stop chicane that built up as the pack all fought for space for their final laps and he did not improve his time on his subsequent laps.

Than meant Norris and Albon finished third and fourth after their late gains on the softs, with Daniel Ricciardo taking seventh behind Bottas and Verstappen – 0.488s behind Ocon's P2 time.

Leclerc and Vettel were both hampered by the traffic late on, with Vettel also have a wild final lap to put in a 1m45.420s that left him last.

The four times world champion had also been forced to catch a big oversteer moment as he ran through Les Combes earlier in the session, locking his left-front as he stopped his SF1000 running off to the right of the track.