May 10 (GMM) Rubens Barrichello has alleged that Ferrari made a threat that might have ended his motor racing career during the infamous 2002 Austrian Grand Prix. 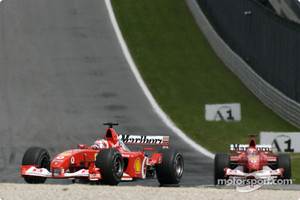 Ten years ago, the Brazilian led the race at the A1-Ring but eventually, at the very last corner, succumbed to team orders that allowed number one teammate Michael Schumacher to pass him.

But Barrichello, having left F1 at the end of 2011 for a seat in Indycar, says it was not quite as simple as that.

"It was eight laps of war," he is quoted by Brazil's Globo.

"It's very rare that I lose my temper, but I was screaming on the radio. I kept going right to the end, saying I would not let him pass.

"That's when they said something about something much broader. It was not about the contract.

"I cannot tell you what they said, but it was a form of threat that made me think about re-thinking my life, because the great joy for me was driving," said the 39-year-old.

Lauda tips Schumacher to win in 2012