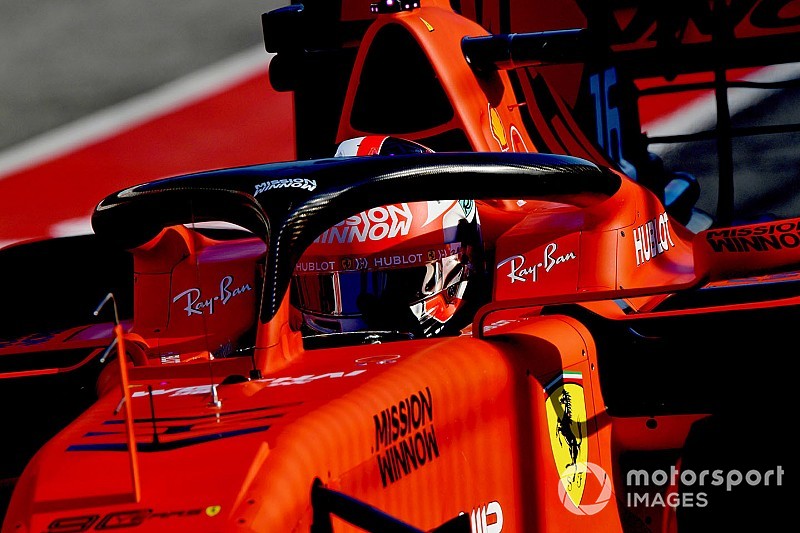 In a stark contrast to their mysterious session-ending crash on Wednesday, the anticipated championship challengers powered through the current test record to fire warning shots to their rivals with a time of 1m16.231s, over half-a-second faster than the nearest competitor.

On a day where the majority of teams attempted higher-pace laps on the C5 tyres in the morning session, Ferrari's effort on the fastest tyre was six tenths faster than Toro Rosso's Alexander Albon, and eight-tenths faster than McLaren's Lando Norris.

The Toro Rosso driver was the first to deliver a lap below the 1m17s threshold, paving the way for Leclerc to whittle down the target time, eventually settling for his time in the low-1m16s.

Despite the initial evidence on the timing screens, an earlier effort from the Monegasque driver will raise more eyebrows. Setting a 1m17.2s on the much-harder C2 tyre, an adjusted tyre delta puts the Ferrari in the high-1m15s, and Leclerc himself confirmed that much more pace was to come from both himself and the team.

"Obviously like every team we are not flat out," he said. "There is still some margin. There is a bit in myself, I still have to learn.

"I get more comfortable with the car lap after lap, and also the car itself. So it is looking good for now."

In spite of a late stoppage with twenty minutes to go, their 138-lap day was bettered only by Williams and reigning champions Mercedes, who once again were not involved in the fight for P1.

Whilst one promoted junior driver shone, another graduate was left to rue a mistake which prematurely ended Red Bull's test day.

Pierre Gasly had is second crash in as many weeks when he ended up in the barrier on the outside of turn nine.

He conceded that he'd made a mistake on the entry of the corner by running slightly too wide, which resulted in a loss of grip, a spin and a high-speed impact with the barrier, which required a precautionary trip to the medical centre.

“It was a pretty big impact, but we’ll focus on all the work we’ve done over the four days."

He finished fourth overall thanks to his morning sprint on the C5 tyre, but his lap counter went no higher than 65 laps.

The Renault duo of Daniel Ricciardo and Nico Hulkenberg finished fifth and sixth respectively - and around three tenths of a second apart - after their flying laps on the C5 tyres, accumulating 138 laps for the Enstone team.

Lance Stroll brought out the red flags when his Racing Point car stopped on track with a sensor issue, but the Canadian still went on to complete over 100 laps, finishing the day seventh, ahead of Alfa Romeo's Antonio Giovinazzi and Haas' Romain Grosjean, who was sidelined for part of the afternoon with an exhaust issue.

Lewis Hamilton's best lap of 1m18.097s was the ninth-fastest time (on the C2 tyre), but Mercedes' insistence on long runs means that the Formula One world will have to wait until the final day to see if they throw on a set of C5 tyres and rise through the order. Bottas' afternoon session brought the team's total to 181 laps for the day, but he finished down in thirteenth.

Eleventh-placed George Russell's 140-lap haul meant Williams were the third most-productive team of the day as they built their confidence with a mix of qualifying and race simulations, whilst Haas' Kevin Magnussen ended the day twelfth.

Ferrari and Haas both hit by exhaust problems