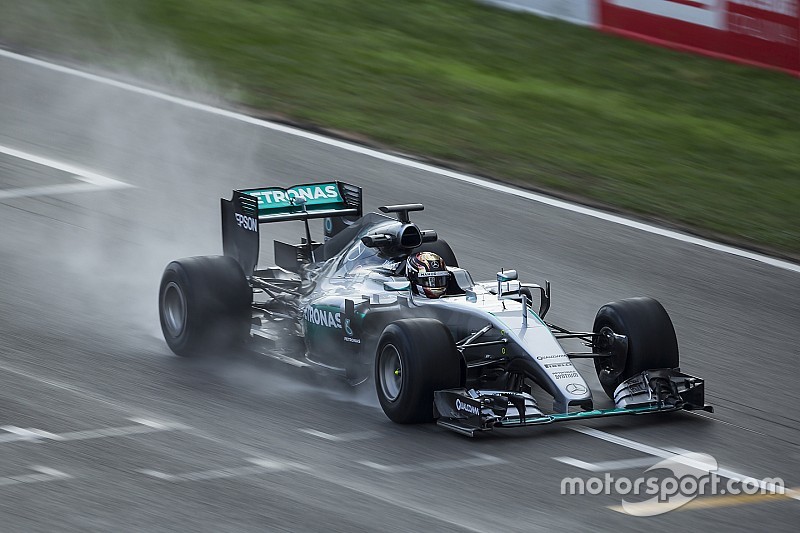 Formula 1's opening pre-season 2017 test will feature at least one day of wet running in a bid to give teams at least some experience of the new wider rain tyres.

While F1 tyre supplier Pirelli has already been granted a single two-day bespoke wet tyre test with a mule car ahead of the start of the campaign, it also wants all the current teams to try out the new rain designs before the Australian Grand Prix.

The current plan is for this to happen during the opening F1 test, which takes place at Barcelona in Spain from February 27 to March 2.

Without that, and with F1 still set for standing starts after safety car periods, there could have been a scenario where drivers would have had their first experience of wet rubber only away from the grid in Melbourne.

The use of a day's pre-season test for wet running is mandated in F1's sporting regulations, but it has always proved difficult to artificially simulate a wet track – and teams were never keen to devote a full day to wet running as they good knowledge of the previous wets.

But the move to wider tyres in 2017 means that the performance of Pirelli's intermediates and full wets will be different this year, not only in terms of how they perform but also in relation to when they are in their ideal laptime window.

Last season, the crossover point to an intermediate was approximately 112 percent of a slick time, while that of the extreme wet was more than 118 percent.

These values are expected to be different for 2017 thanks to new car characteristics, and it makes sense for teams to get some understanding of the impact before they experience wet conditions for the first time at a grand Prix.

It is understood that agreement has been reached that if there is no rain on the opening three days of the first Barcelona test then on the final day the track will be soaked with special tanker trucks to help simulate wet conditions.

Speaking earlier this month, Pirelli motorsport boss Paul Hembery said that his company wanted to make changes to the performance of the full wet tyre this year.

Interview: How F1 winter testing was performed 40 years ago