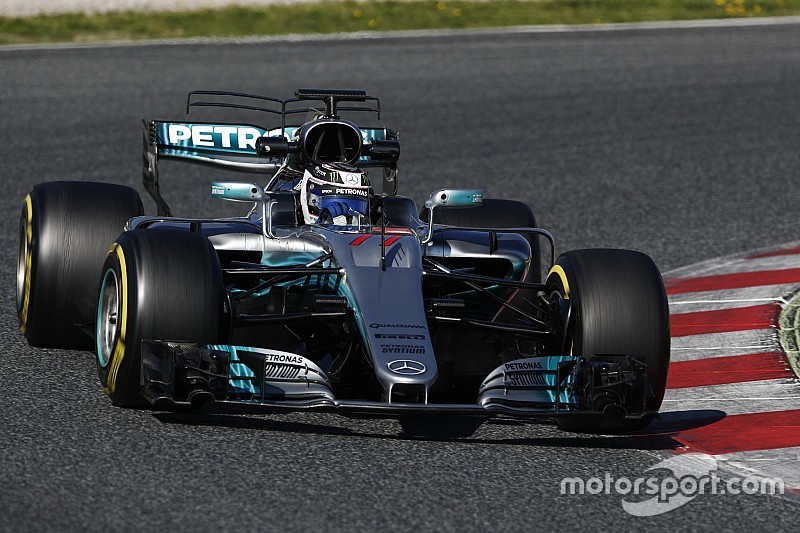 Bottas set the pace on Wednesday morning with a lap of 1m19.705s on ultrasoft tyres, the quickest of the week so far, and the Finn's time went unbeaten for the rest of the day.

Vettel was the only other man to end up breaking the 1m20s barrier, as he set a 1m19.952s around 90 minutes into the afternoon on soft tyres, going 0.247s slower than Bottas.

Taking over from Bottas at Mercedes, Lewis Hamilton performed a full race simulation, sticking to medium and later soft tyres, and setting a best time of 1m22.175s on the latter compound.

His run was interrupted by two red flags however, the first for an off for Carlos Sainz in the Toro Rosso at Turn 4, and the second coming minutes later when Lance Stroll crashed his Williams.

After his day-ending spin on Tuesday and another off just shy of the lunch break earlier on Wednesday, the 18-year-old Canadian caused a third stoppage of the week when he went off and hit the barriers exiting Turn 5, damaging the front end of the Williams FW40.

The crash caused Williams to end its programme early for the second day in a row.

There was a final red flag when Vettel's Ferrari came to a stop just before the start/finish straight with 10 minutes remaining, with the SF70H having to be wheeled down the pitlane.

Despite that, Vettel still managed to complete 139 laps, with Sauber man Marcus Ericsson the next most industrious driver with 126 to his name.

Hamilton completed 95 laps, giving Mercedes a combined total of 170 for the day.

Daniel Ricciardo (Red Bull) and Jolyon Palmer (Renault) stayed third and fourth respectively on virtue of their morning times, with Nico Hulkenberg making it two Renault drivers in the top five with half an hour to go after setting a 1m21.791s on softs.

Marcus Ericsson (Sauber) and Romain Grosjean (Haas) made use of the supersofts to go sixth and seventh fastest, followed by Hamilton, Stroll and Fernando Alonso's McLaren.

After his troubled first day in the Honda-powered MCL32 on Monday, the Spaniard enjoyed a smoother day of running on Wednesday as he completed 72 laps.

His best lap, a 1m22.598s, came during the middle of the afternoon on ultrasofts and left him 2.893s shy of Bottas's morning effort on the same tyre.