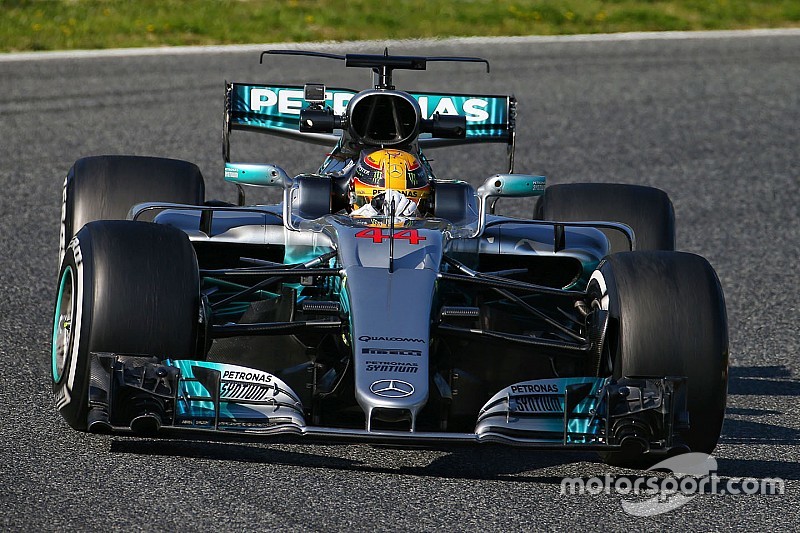 Lewis Hamilton put Mercedes on top on the opening day of Formula 1 testing at Barcelona, edging out Ferrari's Sebastian Vettel by a tenth during Monday’s afternoon session.

Taking over from new teammate Valtteri Bottas, who was second fastest in the morning, Hamilton set a best time of 1m21.765s using soft tyres with just under two hours to go in the day’s running.

The Briton started the afternoon using a shark fin engine cover, its first appearance on the W08, but his best time was set once the team had reverted to its launch design.

Shortly after Hamilton set his best time, Vettel put in a time just 0.113s slower on medium tyres, which was good enough for the German to end the day second-fastest.

As well as topping the times, Mercedes also completed the most laps on Monday, with Hamilton adding 73 to Bottas’s tally of 79 – giving the Brackley squad a total of 152.

Ferrari and Williams also broke the 100-lap mark, with 128 and 103 respectively.

Felipe Massa was third fastest, setting a 1m22.076s in the Williams on soft tyres, getting within 0.311s of Hamilton’s best effort on the same compound.

A late run on softs in the final half hour allowed Kevin Magnussen to move up to fourth in the Haas, 1.129s off the pace, while a last-ditch effort on softs by Daniel Ricciardo put him fifth, 1.161s behind.

After a troubled morning, when a broken sensor on the RB13 restricted Ricciardo to just four laps, the Australian was able to boost his tally to 50 laps by the end of the day, having lost further track time to a battery issue.

Sergio Perez was seventh for Force India, despite losing much of the afternoon to a broken exhaust, followed by Carlos Sainz (Toro Rosso) and Nico Hulkenberg (Renault).

Fernando Alonso, who managed to complete a total of 29 laps after McLaren’s oil leak woes in the morning, was 10th fastest with a best time of 1m24.852s, some three seconds slower than Hamilton.

The two-time champion also suffered an engine shutdown before finally setting a timed lap with an hour and 20 minutes of the day’s running remaining.

Sauber’s Marcus Ericsson brought up the rear, the Swede ending up just over five seconds off the pace.