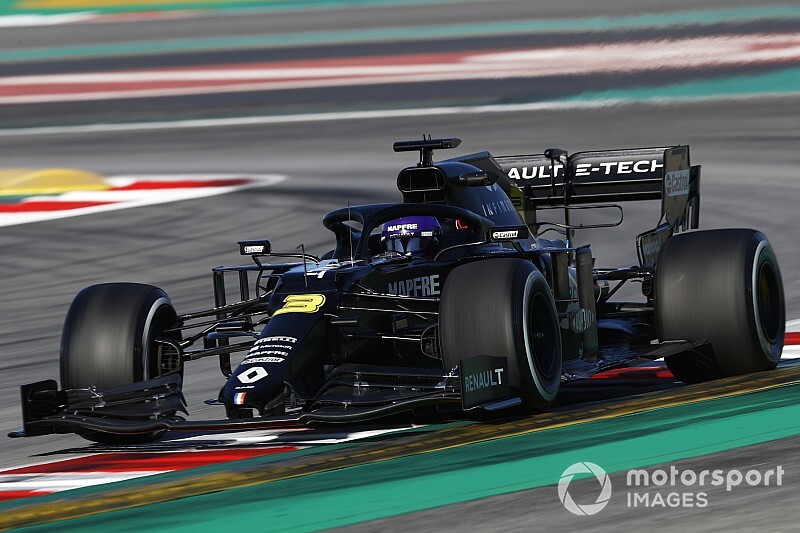 Daniel Ricciardo topped the morning session of the final Formula 1 pre-season test in Barcelona, marking the first time Renault power has been fastest this winter.

The Renault driver went out late on with a set of fresh of the C5 tyres during a flurry of time-attack laps, and shot to the top of the times with the second-best time of testing of a 1m16.276s.

The track proved fairly busy when pitlane opened at 9am local time, with most heading out to begin some long runs.

McLaren's Carlos Sainz led the way after the opening hour with a 1m27.255s on C2s, before a switch to C3s not long into the second hour led to him firing in a 1m16.822s to go a second clear of the field.

AlphaTauri's Daniil Kvyat slashed his advantage to 0.536 seconds soon after, though Sainz would find a marginal gain to improve to a 1m16.820s.

Sainz was finally deposed by Racing Point's Sergio Perez on a C3 time attack as hour three began, taking over top spot with a 1m16.658s.

After teammate Sebastian Vettel put Ferrari on top of the timesheets for the first time this winter on Thursday (see above video), Charles Leclerc took over the SF1000 for the final day of running.

Focusing on logging chunks of laps on a moderate fuel load, Leclerc went for a time attack at the of hour three and fired the Ferrari to the top of the pile on C5s with a 1m16.457s.

He improved around 15 minutes later to a 1m16.360s, which soon came under some threat from the Mercedes of Lewis Hamilton.

The world champion lost out on running on Thursday when his W11's engine shut down due to an oil pressure anomaly, and was out early on to carry on the long runs on C3 rubber he had to cut short.

Hamilton went out for another C5 run to try and usurp Leclerc, but ended up missing out by 0.050s. He completed the most laps of the first session with 90.

At the same time Ricciardo began lighting up the timing screens on his lap, and hooked it together to lead the session by 0.084s from Leclerc and Hamilton.

Perez kept the Racing Point in fourth spot ahead of Sainz, while Williams' George Russell completed the top six.

It was well over an hour into the session before Russell logged any timed laps, as he carried out some aero testing for Williams – which introduced a new rear wing.

Russell, who will remain in the car this afternoon, headed Kvyat, Haas' Romain Grosjean – who had a minor off at Turn 7 at one point – and Alfa Romeo's Kimi Raikkonen, who spun exiting the Turn 14/15 chicane early on.

Alex Albon was last of the 10 runners with a 1m17.803s, and was lucky not to beach his Red Bull at Turn 12 when he spun off into the gravel at the start of the final hour.