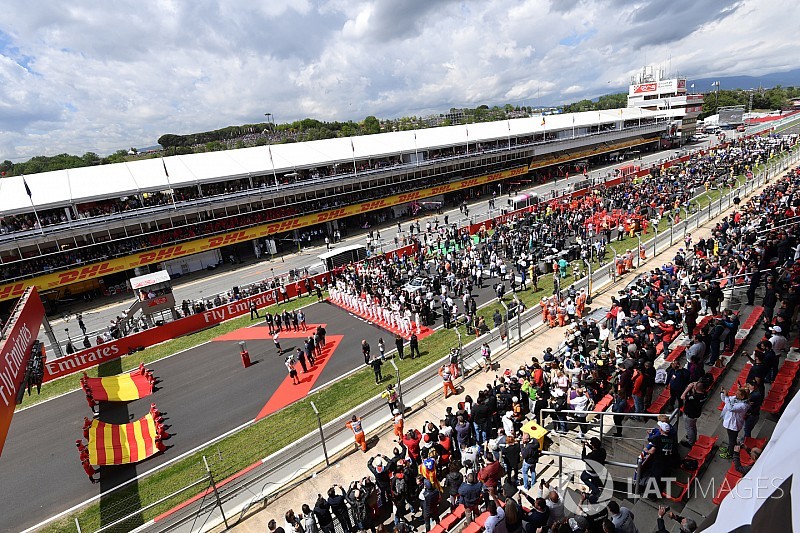 The Barcelona circuit has responded to criticism from the Spanish motorsport federation over the playing of the Catalan anthem during Formula 1's Spanish Grand Prix last weekend.

While both anthems have been played since the first F1 race at the circuit in 1991, the Spanish federation's president Manuel Avino said the body had been "surprised" by what it labelled as a change to the usual protocol.

Avino said the decision to play the anthem appeared to send a "political message" during a tense period following the Catalan government's attempt to secede from Spain earlier this year.

Avino said had the federation being informed of the plan, it would have blocked it.

"Obviously, being the Spanish Grand Prix, and since the regulations name the national anthem in singular, this cannot be other than the Spanish anthem - which is the only official Spanish anthem since 1970," Avino said in a statement earlier this week.

"This alteration in the protocol has - given the current political circumstances - been understood by the media and by a big number of motorsport fans as a clear use of the sport's communication capacity to launch political messages in a particularly delicate moment for Catalunya and Spain.

"The Spanish federation was not informed that this change of protocol would take place, and it was surprised.

"Had the Spanish federation been consulted about the possibility of altering the protocol, it would have refused its authorisation - always with the utmost respect for the Catalan symbols."

On Thursday, the Barcelona circuit responded to the criticism, insisting both the Spanish and the Catalan anthem have been played at the Spanish GP, since the inaugural race.

This included last year's edition, when Avino was already acting as president of the Spanish federation.

"Since 1991, the year of the first Spanish Grand Prix at the Circuit de Barcelona-Catalunya, 14 minutes before the start of the race both anthems have been played on the grid,"  the statement read.

"The protocol to play the anthems has always been the same: first, the Spanish anthem, which is then followed by the Catalan anthem.

"In this opening ceremony, and since the first edition, both flags have also been present: the Spanish and the Catalan one.

"In 2015 a new format was introduced, following a request from Formula 1, with a ceremony of more solemnity, which translated into the presence of the authorities and the drivers heading the grid in front of the flags.

"Mr. Avino witnessed [this new format] for the first time last season in his role as president of the Spanish motorsport federation, with both anthems playing and both flags displayed."

F1 should have hypersoft at every race - Ricciardo