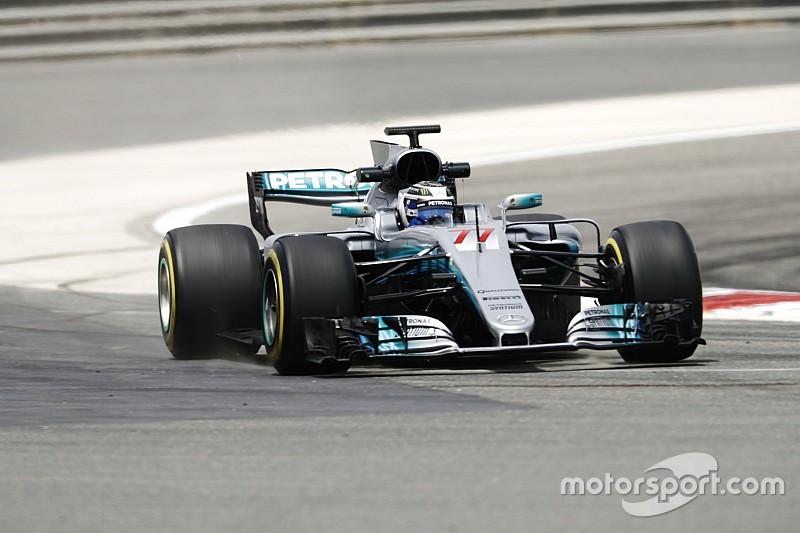 Valtteri Bottas was fastest on the final morning of the in-season Bahrain Formula 1 test on Wednesday, as Mercedes continued a joint programme of aero work and tyre understanding.

With Lewis Hamilton having suggested that his Brackley-based team had made progress in understanding how to better manage its long runs on Tuesday, his teammate completed more laps than anyone this morning to continue those efforts.

Interestingly, running without the T-wing, Bottas produced his best lap of 1m31.771s early in the session, shifting to more longer stints later on to help try to unlock the reasons behind his own tyre struggles in the Bahrain GP on Sunday.

However, Bottas brought out the first red flag of the day just after 1pm when his car stopped on track at Turn 4.

Force India is another team trying to unlock the potential it feels it has in its car, with Esteban Ocon setting the second fastest time of the morning. The Frenchman will hand over his car to Sergio Perez this afternoon.

Toro Rosso's Daniil Kvyat was third fastest, just 0.071 seconds behind Ocon, while fourth fastest Sebastian Vettel had a frustrating time as he was confined to the garage for much of the morning.

With the team having wanted to use the day for an intense data logging programme, a change of settings on the car had revealed some problems with leaks in internal components.

That forced Ferrari to remove the rear end of the SF70H to fix the problems, before remounting the engine and getting the German out again just after 1pm to add to his morning tally of nine laps.

Williams development driver Gary Paffett returned to F1 track action for the first time since 2013 to end up fifth fastest, ahead of Stoffel Vandoorne, who was enjoying a much more encouraging day with McLaren-Honda.

After the troubles caused by the ERS water leak on Tuesday that forced an engine change, Vandoorne completed almost 50 laps in the morning without trouble as McLaren was finally able to get on with a proper testing programme.