Bad day for Alonso as Vettel dominates with 'double DRS'

Oct.7 (GMM) Fernando Alonso's championship lead took a massive hit in Japan on Sunday, after the Spaniard spun into retirement at the first corner.

The fact his main championship rival Sebastian Vettel went on to dominate the Grand Prix was therefore the worst-possible news for the Ferrari driver, whose rear tyre was cut by Kimi Raikkonen. 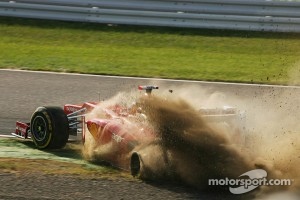 Fernando Alonso, Ferrari crashes out at the start of the race

Alonso's championship lead is therefore slashed from 29 points to just 4 with five races to go.

"5 great races coming!" Alonso announced on Twitter after his retirement.

Vettel dominated at Suzuka, amid reports in Germany's Auto Motor und Sport his Red Bull has been boosted this weekend by the addition of a new 'double DRS'-style rear wing.

"It means Red Bull can run more downforce to make the car faster in the corners without the consequent penalty on the straights," explained BBC technical expert Gary Anderson.