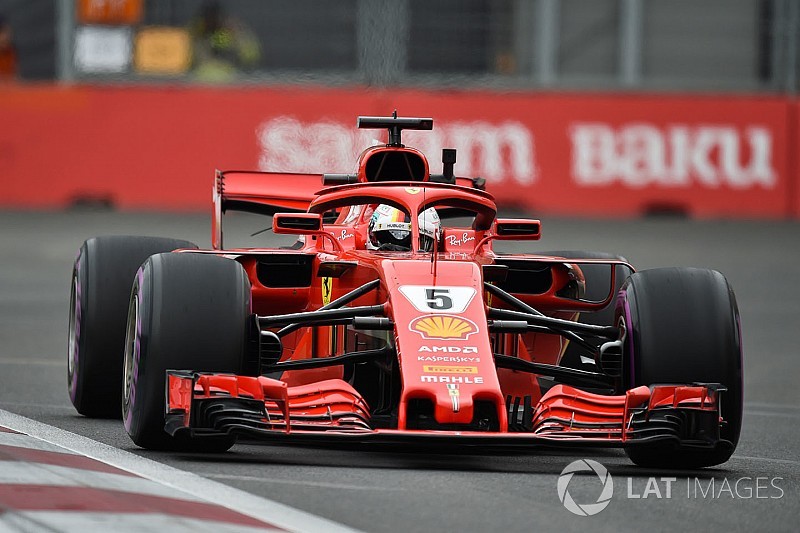 Vettel ended the session 0.361s clear of his nearest rival, Mercedes driver Lewis Hamilton, but came up short of the overall best lap of the weekend set by Red Bull's Daniel Ricciardo on Friday.

The Saturday morning practice was briefly suspended for a late crash for rookie Sergey Sirotkin, whose Williams FW41 suffered a hard impact with the outside wall at the Turn 3 left-hander.

The session began with a round of installation laps, with Ricciardo putting the first flyer on the board eight minutes after the green flag waved.

His early benchmark was immediately surpassed by Kimi Raikkonen and Vettel, the pair then trading the session lead several times before the latter managed a 1m43.176s to end the opening run seven tenths clear of his teammate.

The Ferrari 1-2 remained past halfway, before the two Mercedes cars split Vettel and Raikkonen – with Valtteri Bottas recovering from two off-track excursions on his opening run to go second on fresh ultrasofts.

But Raikkonen then swiftly reclaimed second place, before Vettel a logged a minor improvement with a 1m43.091s effort.

Shortly after Hamilton broke up the Ferrari 1-2 once more, Sirotkin's crash suspended track action, with only three minutes left on the clock when the running resumed.

The top three remained unchanged, with Vettel leading Hamilton and Raikkonen, but Red Bull's Max Verstappen put a lap together to pip Bottas to fourth place.

Force India's Sergio Perez was sixth despite going off on his final effort, with Haas driver Kevin Magnussen in seventh.

Magnussen's teammate Grosjean endured a difficult session in 15th, struggling badly with oversteer on his opening run and suffering a spin at the Turn 16 left-hander.

Lance Stroll was eighth for Williams, with Esteban Ocon and Sirotkin making it two Force Indias and two Williams cars respectively in the top 10.

Friday pacesetter Ricciardo was only 12th, the Aussie forced to abort a late push lap in traffic.

With harder tyres at a premium heading into the race, all teams but Renault ran exclusively on ultrasofts.

The French manufacturer's pair of Carlos Sainz and Nico Hulkenberg ran supersofts for most of the session, and ended up 16th and 17th in the timesheets.