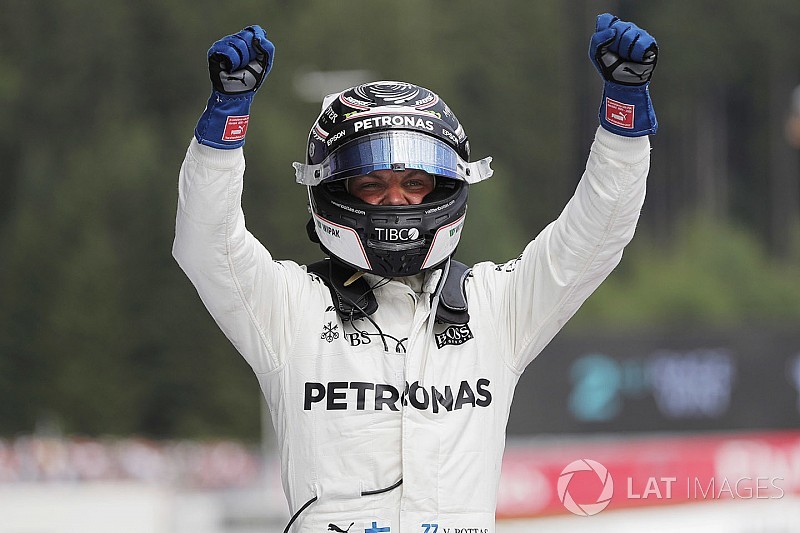 Valtteri Bottas survived a jump-start investigation to score his second Formula 1 victory in the Austrian Grand Prix, holding off a stiff assault by points leader Sebastian Vettel in the final laps.

From pole position, Bottas made the perfect getaway to lead – so much so that both Vettel and Daniel Ricciardo questioned over team radio whether the Mercedes driver had in fact jumped the start.

Bottas was placed under investigation, but was deemed to have taken 0.201 seconds to react to the lights, and was subsequently cleared of any wrongdoing by stewards.

Ricciardo settled into third after pushing Kimi Raikkonen out wide at Turn 3, which dropped the Finn back to fifth place behind the Haas of Romain Grosjean.

Two laps later, Raikkonen retook the place, but was unable to make any impression on Ricciardo’s Red Bull as the top three began to spread out at the head of the field.

Behind, the second Mercedes of Lewis Hamilton passed Sergio Perez’s Force India and Grosjean early on to move up to fifth by the end of the eighth lap.

But the three-time champion soon found himself stuck behind Raikkonen and ended up being the first of the leaders to pit on lap 31, swapping his supersofts for a set of ultrasofts that he would take to the end.

Ricciardo came in to change his ultrasofts for a set of supersofts on lap 33, with Vettel following suit a lap later. Bottas left his one and only pitstop until lap 41, rejoining just behind Raikkonen, who was kept out by Ferrari.

But any efforts to hold up Bottas proved futile as the Mercedes driver retook the lead on lap 44, with Raikkonen pitting at the end of that lap.

From there it was simply a case of Bottas managing his advantage over Vettel for the remaining laps, which had been around six seconds prior to his pitstop.

Vettel managed to get the gap down to less than two the closing stages, and with three laps to go was just 1.1s behind - but never was able to get close enough to attack and lost out by just 0.658s at the chequered flag.

Raikkonen rejoined in fifth place behind Hamilton when he made his stop shortly after being passed by Bottas, and Hamilton was able to make inroads on Ricciardo in the fight for third.

The pair started the final lap less than a second apart, Hamilton having got alongside at Turn 4 on the previous tour, but the Mercedes man couldn't get close enough on the final lap to pass and had to settle for fourth.

Raikkonen was fifth, as Grosjean held on to sixth place to register his best result of the season so far, followed by Force India duo Perez and Esteban Ocon in seventh and eighth.

From 17th on the grid, Felipe Massa went long on a set of soft tyres to move up to ninth place, and was challenging Ocon for eighth in the latter stages.

Massa was followed home by Williams teammate Lance Stroll, who scored points for the third race in a row with 10th place, holding off the lead Renault of Jolyon Palmer.

McLaren driver Stoffel Vandoorne, who didn’t lose a place after taking a drive-through penalty for ignoring blue flags, finished 12th, ahead of the second Renault of Nico Hulkenberg.

Max Verstappen suffered his third straight retirement, as a slow start caused by a clutch issue meant he got caught up in a three-way clash with Daniil Kvyat and Fernando Alonso.

Toro Rosso driver Kvyat locked up on the inside line at Turn 1, hitting Alonso’s McLaren and collecting Verstappen’s Red Bull in the process and eliminating both.

Kvyat was handed a drive-through penalty for causing the collision, and finished 16th behind the Saubers of Pascal Wehrlein and Marcus Ericsson.

The second Toro Rosso of Carlos Sainz retired at mid-distance with a suspected engine problem, while Haas driver Kevin Magnussen was the other non-finisher with gearbox trouble.