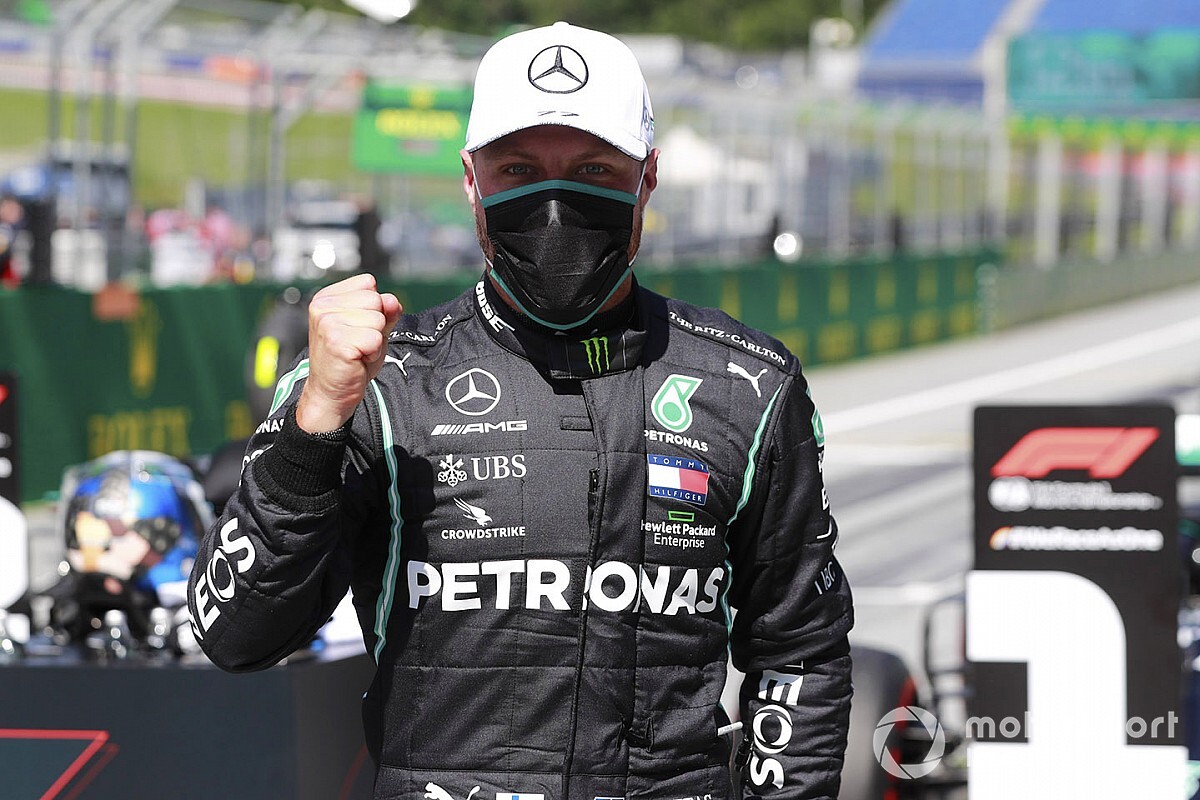 Valtteri Bottas turned the tables on his Mercedes Formula 1 teammate Lewis Hamilton by claiming pole for the Austrian Grand Prix despite skating into the gravel on his final effort.

Max Verstappen claimed third for Red Bull and will start on alternate tyres to the Mercedes drivers, with Lando Norris claiming a sensational fourth for McLaren as Racing Point's pace was only good enough for sixth for Sergio Perez and Ferrari's form faltered further than expected.

Bottas broke the track record at the Red Bull Ring with a 1m02.939s on his first run in Q3, with Hamilton unable to get under 63-seconds on his own first effort in the final segment as he lost time in the second and third sectors.

On their final flying tours, Bottas improved his time in the first sector but then slid into the gravel at the exit of Turn 4 – later spinning on the grass as he returned to the track – while Hamilton looked to be improving.

The world champion did better his time to a 1m02.951s but wound up second on the grid for the race having topped all three practice sessions.

Verstappen took third but will start the race on the mediums after getting through Q2 on the yellow-walled rubber, with Norris rising to fourth with a stunning final effort in his MCL35.

Alex Albon qualified fifth in the second Red Bull ahead of the much-fancied RP20 of Perez, who nevertheless beat Ferrari's Charles Leclerc to P6.

Leclerc was the sole Ferrari runner in Q3 after Sebastian Vettel did not make it past Q2, but the 2019 Austrian GP polesitter ended up nearly a second slower than Bottas' time.

In Q2, which Bottas topped fractionally ahead of Hamilton, Sebastian Vettel was dramatically knocked out when Albon leapt up the order with a late improvement in the second segment.

Vettel had been at risk as he was only P10 after the first Q2 runs, and on his final effort he bounced over the kerbs at the first and final corners, sliding wide on each occasion and not improving as a result, with Leclerc only just getting into Q3 with P10 at the end of Q2.

Behind Vettel came Pierre Gasly in the lead AlphaTauri, with his teammate Daniil Kvyat in P13, ahead of Esteban Ocon – making his first F1 qualifying appearance since the 2018 Abu Dhabi GP – and Romain Grosjean.

In Q1, which was topped by Verstappen while Albon had a nervous wait as he was not sent out again for a final run in the opening segment, last-gasp improvements from the Haas drivers cost Williams a Q2 slot.

Grosjean squeaked through ahead of his teammate Kevin Magnussen, while Russell, who was P15 before the final Q1 runs, did not improve on his last effort – possibly losing out thanks to a snap of oversteer exiting the downhill right of Turn 4 – and will start 17th.

Antonio Giovinazzi ended up 18th after he skated into the Turn 4 gravel trap on his final run, with Kimi Raikkonen behind in P19, ahead of Williams rookie Nicholas Latifi, who took to the track immediately in Q1 to make up for the time lost in his FP2 crash.