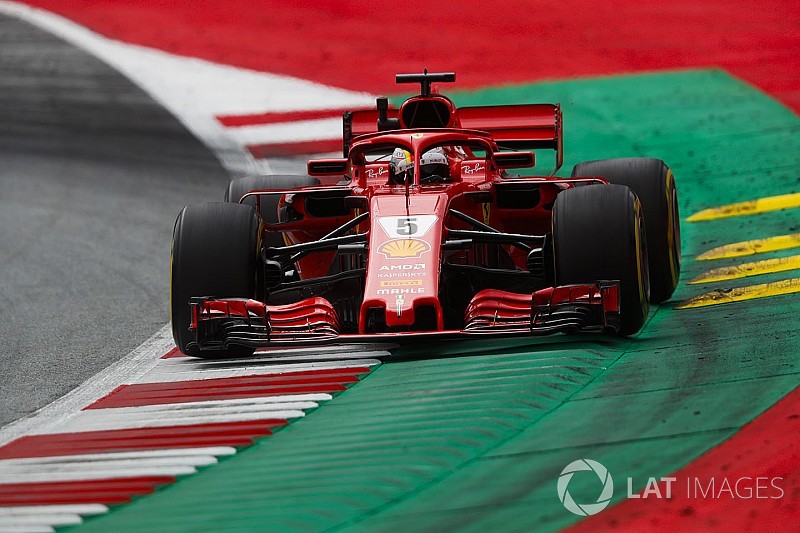 Sebastian Vettel was fastest in final practice for the Austrian Grand Prix as Ferrari overhauled Formula 1 rival Mercedes ahead of qualifying at the Red Bull Ring.

Vettel emerged on top of a rapidly-changing battle between the two teams through the session to beat title rival Lewis Hamilton by just 0.029s.

Valtteri Bottas lapped just over a tenth slower than Vettel but the second Ferrari of Kimi Raikkonen was a quarter of a second further off the pace.

Raikkonen was the first driver to set a flying lap and worked his way into the 1m04s before being usurped by Vettel by just 0.017s.

Bottas and Hamilton, who had traffic on his first flying lap, followed the Ferraris as the top four lapped barely a tenth apart, before Vettel pumped in a 1m04.699s.

Vettel set a personal best but could not wrest back top spot and fell 0.006s short of Bottas's time at the end of the opening half an hour.

Hamilton and Raikkonen then wasted chances to go quickest, Hamilton sliding wide at the exit of Turn 3 and Raikkonen skating across the gravel through the fast Turn 7-8 esses.

Raikkonen continued after that off and his next flying lap, completed without error, put him fastest on a 1m04.470s.

The succession of improvements continued though, and with 20 minutes to go Vettel returned to top of the pile on a 1m04.159s.

That briefly established a Ferrari one-two but Bottas ended that almost immediately with a time 0.045s slower than Vettel's.

The gap grew slightly when Vettel posted his final improvement, a 1m04.070s, with just over 15 minutes left, before Hamilton got back ahead of Bottas by a tenth.

With Ferrari and Mercedes engaged in a private battle at the top of the leaderboard Red Bull ended up a distant fifth and sixth, 0.7s back.

Max Verstappen had a trip through the gravel on the exit of Turn 4 midway through the session but improved later on to get ahead of teammate Daniel Ricciardo.

However, his session ended early when he ran slightly off-track again at Turn 4 and then pulled up on the right-hand side of the circuit, reporting his Renault engine had switched off.

Once the yellow flags were withdrawn following the recovery of Verstappen's car, Kevin Magnussen jumped to seventh in his Haas before teammate Romain Grosjean edged ahead by a tenth.

They were the last drivers to lap within a second of Vettel as Renault's Carlos Sainz and Charles Leclerc completed the top 10.

Leclerc prevented any final improvements in the last two minutes when he stopped his Sauber on the right-hand side of the circuit just after exiting the first corner with a reported engine problem.

F1 stewards may give tougher penalties for incidents